It’s almost upon us. The UK’s largest hip hop festival, ‘Boom Bap’ is set to send shock-waves over the whole nation and you won’t want to miss out. In less than a month, on the 5th-7th of June, you’ll be able to catch microphone legends, new and old, pumping crowds across Midenhall, Suffolk until they can shuffle no more!

Since kicking off back in 2012, Boom Bap has grown at an extreme pace. It was originally held as an 800-attendee festival behind a pub in Peterborough. Since then, the baby that was Bap has sprouted into an internationally celebrated event and even has an annual stage showcased at Croatia’s Outlook festival. Over the last few years, we’ve seen the festival host Ghostface Killah, DJ Premier, Mr Thing, MF Doom and many more, and this year is no exception.

Lining up to smash sets on this summer’s stage, the hip hop celebration will have Odd Future‘s Earl Sweatshirt headlining, as well as BBK’s Skepta. Not only will we be treated to them, but Boom Bap is giving us a serious gift in the form of more masterminds; from Foreign Beggers to Fatima and Jeru the Damaja to IAMNOBODI. The speakers are certainly going to be booming!

Alongside the music, we festival fanatics’ will be able to snag up some ultimate street gear. You’ll be able to hit up the street-wear market to get some fresh threads, mix in with the maestro’s at the highly anticipated record fair, as well as feasting your eyes upon the Hip Hop cinema. A cushion lined cutch has been specially created so you can sit back, relax and enjoy an array of documentaries indulging into hip hop culture. Let’s not forget the live painting either. An army of the finest Graffiti artists, including 3Dom, London’s Tizer and Ryder will be transforming the festival site into a canvas of colour – creating pieces that are truly breathtaking.

Proudly partnering with a network of promoters from around the globe, Boom Bap is guaranteeing a family vibe and everyone is welcome. Director, Ivan Andrade said, “It’s been pretty overwhelming the amount of love we’ve had from promoters all around the world. It’s great to be championing the music we grew up on and with. We know a lot of the bigger festivals are squeezing token rap acts between pop and indie – we’re just trying to stay true to the culture … and to show people a damn good time while we’re at it.”

With VIP now sold out, you’ll have to snap up a second tier ticket if you want to witness this brilliance. There is no way we’re going to miss this one and you better believe the hype. From ferocious set’s that’ll give you tingles, to the finesse of the mesmerising street art – Boom Bap will be making history for many years to come. So get you tent ready, fill your car up with juice and set off to Suffolk to the biggest hip hop event in the UK. 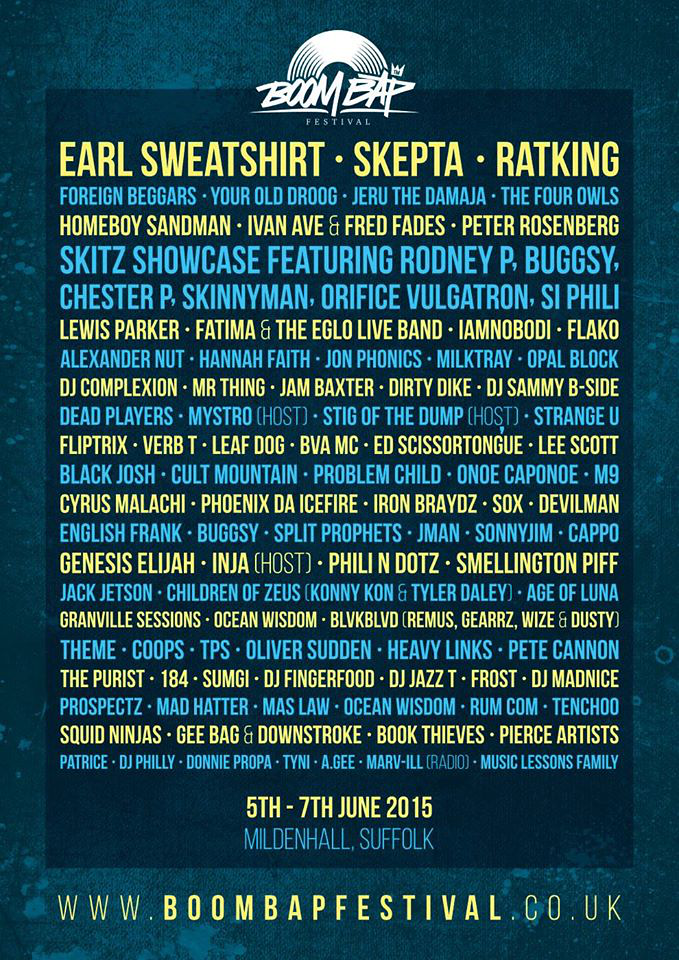