I Am Kloot Interview

They have a really busy time coming up, with their European tour commencing on April 4th and their new album being released on April 9th. We managed to catch up with one of the bands members, John Bramwell, just before they were due to start rehearsals.

Obviously you guys are called, ‘I Am Kloot’ – how did the name come about?

I just thought of it and really liked it. I loved the mystery of it. There’s poetry and mystery in a lot of the songs, so it seemed to fit. All the bands at that time were all called single names like, ‘Oasis’ or were called, ‘The’ something, so I didn’t want it to be a single name or for it to have a ‘the’ at the beginning of it. Why should a band name have to be ‘the’ something? I can’t go into any more detail… we always say if we tell you, we’d have to shoot you!

Who would you say are your biggest musical influences?
I came from a family that’s very into music – my mum, dad and my sister. My dad was into a lot of beat bop and jazz, my mum into musicals and my sister was into like Beatles, Bowie, Slade and T-Rex. I didn’t realise until later on but if one of us stuck the radio on, my mum wouldn’t ever hesitate to sing along to songs. My influences were really varied. I think your real influences come from the music you absorbed when you were very young. In a way – before it was your choice.

It’s a really exciting time for you guys coming up. How do you feel about going on tour again?
It’s exciting because we’ve got quite a large back catalogue. I think we’ve done six albums and because this album we’re bringing out is a live album, there are no new songs on it. What we’re going to be doing is playing four or five songs from each of our albums, which we’ve never done before. It’s always been mainly new stuff we’ve played when we’re on tour, so it’s quite nice really. We get a chance to play some of our old songs that we never really get a chance to play you see.

On Twitter you asked your fans if there were any older songs they would like to hear during the tour – have you taken any of their suggestions on board?
Rehearsals start today so when we meet up I’m hoping Andy will show us the fans suggestions. I think we will be doing what they’ve requested – there’s nothing in our back catalogue we don’t like to be honest with you.

Andy Burrows is supporting you on tour, what is it like working with him?
We did a few gigs with him about two years back in Germany. I just really get along with Andy and I think he’s quite a bit mellower than we are in some ways, but I think our audience really like his stuff. I’m looking forward to seeing him actually.

Currently you’re working with Andy Burrows – is there anyone you’d particularly like to work with in the future?
I’m putting together a collection of songs just by me and I’m hoping to work with Edwyn Collins on it. That’s someone I’ve always wanted to work with. I know that Edwyn’s currently building a studio, so I don’t know how long it will take. If it takes too long we won’t be, so I don’t know – fingers crossed. 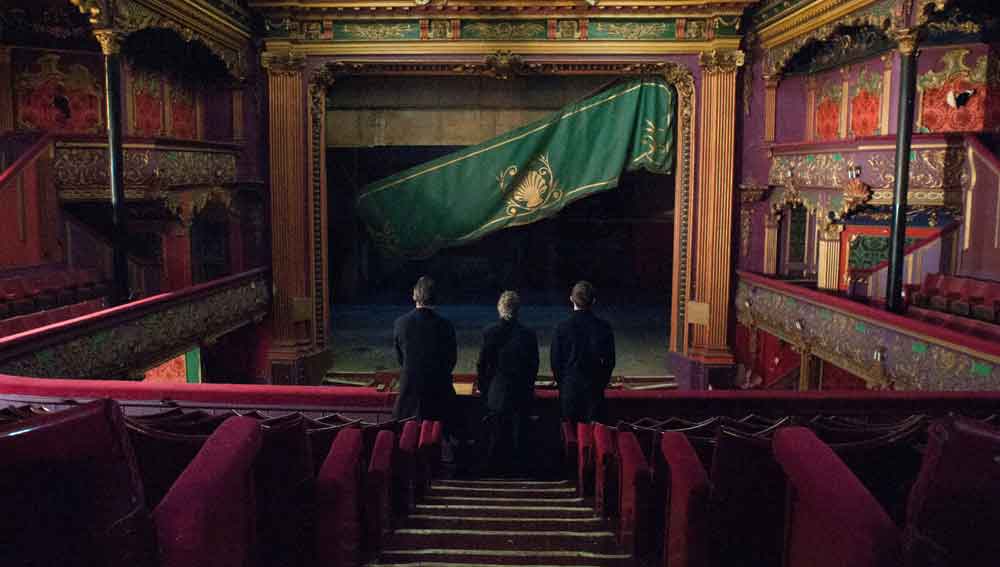 As well as your tour, your new album, ‘Hold Back The Night’ is released on April 9th. It features live tracks recorded from your 2013 European tour. Did you feel any pressure knowing these were recorded live?
No we didn’t, no. Without telling us, our sound engineer bought some extra equipment and recorded all of our gigs. Initially, we didn’t know he’d recorded them. We play the best at our gigs anyway and there’s tiny little mistakes, which we’ve left in, so you’ve got the audience on there and everything.

Is that why you decided it should be the title of the album?
It is in a way. We thought it was good because ‘Hold Back The Night’ is what you do at a gig. It just had the poetic sense to it for a live album.

So you’ve got both the tour and the album coming up. Do you prefer being on tour or in the studio writing music?
For me, I always feel it’s about the gig. The gig is where it all matters in a way, so I’d have to say the gigs are more important but I don’t want that to seem like I don’t care about the album because it’s not true.

You are due to release a new album shortly, but do you have any plans to record any new material soon?
You only need to have your guitar with you in order to be constantly just getting down new ideas. When we have our sound checks at gigs we usually sound check something we’ve made up and sometimes something comes from that. It’s very easy these days to make sure you get a decent recording of it. Technology allows us to record whenever we want.

Have you got any other projects lined up after the albums been released and the tours finished?
Yeah. We’ve got some more festivals we’ll be doing. I think we’re Glastonbury again, which is great. This is our sixth appearance in twelve years. Every other year they seem to have us on in some way or another, so that’s quite nice. We’ve got a few festivals abroad as well and more stuffs coming in at the minute, so we’ll definitely be playing now until probably the end of September.

There’s always a variety of different acts that perform at festivals. Do you have a favourite upcoming artist that you think is really good?
My favourite band that I want to see live is ‘Hook Worms.’ I recommend people go and see them. It’s on its own what they’re doing at the minute – I really like it. Dave Fidler supported me on some of my solo gigs earlier on this year. He’s outstandingly good. I was worried every time I went on stage because he’d gone down so well.

Finally, have you got any tips for students wishing to start up their own band or wanting to progress further within the music industry?
Use the facilities at university to help you. To get to the point of being noticed, it takes money really. Maybe university isn’t a bad time to be doing that because you can probably get quite a few things for free, like free space to rehearse. I would say whilst you’re there, go and talk to people who are doing a degree in marketing or art and see if they’ll do some work for you.