Selina Borji is not your average student union Vice President. With an acting role in an award winning BBC sitcom and the founder of a flourishing art project, her ambition to succeed really shines through. We spoke to Selina about her achievements and asked what advice she has for any students taking on leadership roles in their university and how to get into the glitzy world of acting!

Hi Selina, thanks for having a chat with us!

You are currently Vice President of the City of Liverpool College Students Union, which is a real achievement, what is the most rewarding part of your role?

The most rewarding part for me is actually seeing change, especially introducing people to new experiences and broadening their minds and potential. Letting them know that they can achieve more and also letting them know that the City of Liverpool College has more to offer than they think. It’s also rewarding when students realise that people are interested in them and that there are people around that do care about them.

What encouraged you to get into your role as Vice President?
Well, I actually left school at 14 and went on to volunteer in the education department at the Tate Art Gallery in Liverpool. It was about engaging every day people with the arts and from then on, I always had a passion about education and campaigning for better education. I really enjoy talking to real people about real issues and trying to make people’s lives better. Through my role as Vice President I give a voice to students, so that they can see change within the college.

What advice would you give to students thinking of applying to be a key part of their student union?
I’d say to really make sure you’re organised. I think if you’re organised from the very start it’s going to be a lot easier, but then I guess that does apply to everything you do in life.

You are also starring in the BAFTA nominated BBC Four sitcom, Puppy Love. For those who may not have seen it, what it is about?
Puppy Love is about two families, one is working class and one is quite upper class and it’s about the conflict in interests and relationships between the two head women of the families. Vicki Pepperdine (who plays Naomi) co-wrote it with Joanna Scalan (who plays Nana V) and they are the two main roles, the head women of the family. It is set around a dog training class that’s run by Nana V and that gives a great comedy aspect to the show.

What role do you play?
I play Jasmine, the daughter of Naomi and I fall in love with the grandson of Nana V, it’s a conflict of class that they’re not very happy about. If you didn’t guess by the name, there are loads and loads of dogs in the sitcom and it’s also about the human relationship with dogs as well.

You say there were loads of dogs on set; they say never to work with children or animals, were the dogs well behaved?
Ha-ha, rather than the dogs getting up to mischief, it was me! Unfortunately in one of the scenes, I fell into a dog basket by accident. Everyone had a little panic in case I broke any bones or anything but I fell right into a very large dog basket, it was for a dog that was the size of me, so I was quite comfortable anyway!

Ha-ha! That’s okay then, did they keep that mishap in the show?
No! No cameras got that fortunately for me, I think I would have been quite embarrassed.

So, what was it that inspired you to get into acting?
My primary school really, it was very arts focused and I had a wonderful Drama teacher. It was all about how the arts can influence the world and society. I think I got more from primary school than I did from any other education. A few years ago, I auditioned for a London agency and ever since then I have been going to auditions for various roles. I got the role as Jasmine in Puppy Love, which I guess is like my big break! 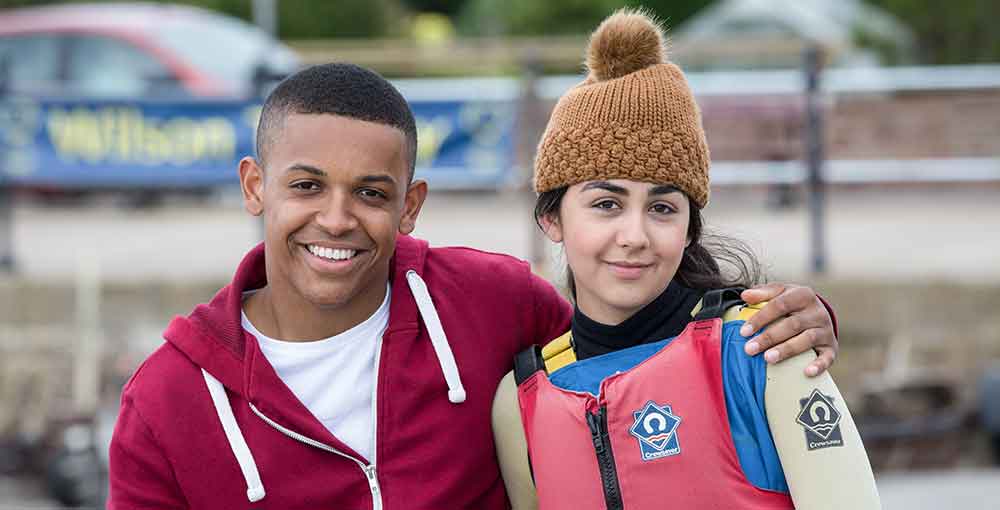 You are also a keen artist; your ongoing project ‘I Am Dovetailed’ has been recognised internationally! Can you tell us a bit more about the project?
‘I Am Dovetailed’, is basically about merging the artist and the audience together in a live feed.  I take self portraits and then also write free verse poetry which is all documented online. I take self portraits, which I edit there and then.  Whilst I’m posting the images, I write the free verse poetry and I don’t spell correct it, so it’s about creating art in the moment. If I created it in a different second on that day, or a different day of that week it would have been a completely different art piece. It’s almost like a stream of consciousness with visuals and writing. It’s also about having an art gallery that is constantly updated on the Internet, so that everyone can see it and it’s completely accessible.

Why did you decide to start your art project and who are your biggest influences?
It’s hard to say really, I remember starting the project at about 2 o’clock in the morning when I couldn’t sleep. To me, it felt like a very natural thing to do. I also remember trying to name the project that same morning. As I was collaborating between writing and visual images, I was joining them together. I went on an online thesaurus and found the word ‘dovetail’ which is a dovetail joint in carpentry. So it’s linking things together. My biggest influences I would say are Cornelia Parker and Damien Hirst. Although a lot of people are quite bitter towards Damien Hirst in the art world, I love his work.

If your work could be featured in any gallery, what one would it be and why?
I’d probably say the Saatchi Gallery because it’s never afraid to make new statements. It’s not worried about what the corporate side is going to be. It’s more interested in actual art and making art history.

If you had to pick art or acting, what would it be?
I would probably say art because I’ve done some performance art pieces in the past. I think in a lot of art pieces, the artist themselves are acting in certain roles. Whether it’s a photo shoot or video art, I would still be able to act within the art.

You are planning to go on to university and study Interactive Arts at Manchester Metropolitan University. Was going to university always part of your plan?
No, not at all, for years I’ve been on and off deciding whether to go to university or not. I was worried about the rise in tuition fees. For a long time I was like, I won’t go to university, I’ll just get experience within the art world. Then I realised Manchester Met had all these wonderful facilities, they’ve just had millions of pounds spent refurbishing the art department and I’ll never have access to those facilities ever again. So then I thought I’d just go for it!

How has your time at the City of Liverpool College prepared you for university?
Well, it’s my first kind of ‘proper job’ you could say. When you work 9-5 you do have less time for yourself and you have to spend your time more wisely. You learn about yourself more that way, but I have also learnt about organising which I think is going to help me a lot with getting projects handed in on time.

What do you hope to do once you’ve finished university?
I’d love to carry on acting, fingers crossed Puppy Love comes back for a second series in the future, but it would be great to get a role in a drama where I could really perform. Secretly my guilty pleasure is Sci-Fi, so it would be amazing if I got a role in Stargate or something haha. I’m also hoping to be making big, interactive art installations and public art. So, pieces for shopping centres or big parties like The Oscars, which would be fantastic. I’d like to still be displayed in galleries but also working with communities.

Thank you so much Selina for telling us about all your achievements! We hope to see you on the big screen very soon!