The unstoppable, heavyweight force that is Anthony Joshua, recently took time off from his intense training to chat to us here at the SPG. Being one of the best to come up in British boxing for years, we spoke about his diet, the walk on music and life before the Olympics, so here is what he had to say…

Hi Anthony! You are fast becoming an absolute boxing legend! How is everything going for you at the moment?
I’m good! It’s chilled out, I’m gunna start punching bags and shadow boxing on Saturday, and gunna be focusing on what’s next really!

So that’s now 13 wins, 13 knock outs and not a single man has made it past the third round. That’s amazing! How long before you’re going to be world champion?
Ah, that’s not down to me! I’ve just got to defeat who’s in front of me.

Cool! Because you win your fights so quickly, we’ve heard that you go back to the gym and do another nine rounds on the pads? Is this true?
Yeah, it’s not every time because if I’m fighting back to back, my coach will say ‘You know what, you need a rest now’ but if I get them out of there in two rounds and we’re scheduled to do ten, I think it makes sense to go back to the changing room and hit the pads.

And how about your diet? What sort of stuff do you have to eat? We saw Dwayne Johnson’s meal plan and it was crazy!
It’s simple stuff, I don’t know about all this ‘diet plan’. You’ve just got to eat clean, your body is the best nutritionist and that will know what you want.

I suppose it’s all about being healthy at the end of the day?
Yeah, that’s the main thing! I don’t wanna say that you should cut out certain things cos my body has always been used to it.

Do you ever just fancy a cheat day where you can scoff on loads of pizza? What meal tempts you the most?
Ahh 100%! If I’ve been at camp for a week and there is chocolate in the fridge it’s tempting cos you’re not really around them luxuries there; and a chocolate fudge brownie with ice cream or an apple crumble haha!

Ahh sounds too good! Moving away from boxing, you used to work as a brick layer, do you think you’d still be doing that now if you didn’t become a boxer?
That’s right! It depends, you do get good money from being a brick layer but it’s a hard graft. On a hot summer’s day it’s tough and in the winter too, it depends but I think I would have been a brick layer for sure.

You also grew up in Watford, what was life like as a teenager?
It was pretty chilled. Watford is like a burrow, everyone knows everyone, so I’m still in touch with all my mates now. It’s good growing up in a community where we weren’t really shut down from reality. We were all just climbing trees and doing stuff that kids do and then I found boxing.

So you started boxing when you were 18 and became an Olympic gold medallist in your home country! How did that feel and how’d you go about celebrating such an achievement?
That was just crazy! Me and my mate went to Barbados and just chilled out. It was nice!

It must have been brilliant! When you’re at a party, do you ever get the DJ to play your walk on Music?
HAHA! No way! I’m not world champion yet! Give me a few more years.

You’ve had 50 Cent and Jay Z as walk on tracks, but who is your favourite artist in the music world?
It’s probably a guy called Jadakiss or Fabulous, I like those guys.

They are wicked! Now, the question on everyone’s lips is who would you like to fight next on your way to becoming champion? There are loads of names being thrown about.
Ahh, it will have to be Deontay Wilder!

Well, we can’t wait for that! Past or present, which boxer would you have most like to have fought and why?
That would have to be Jack Johnson. He was a big guy, very dominant in his era and he was the first of many to bring that trash talk to boxing. So, to see how the humble guy that people think I am, against the flash guy in Jack Johnson coming to blows, I think it would have been good.

That would be brilliant! You don’t get involved in the trash talk too much like you say. Any reason why?
Yeah it’s just natural, I don’t put it on and I’m not urging to say something negative. It just portraits a negative energy, that’s what it is.

It must feel good to silence those who do trash talk after you knock them out in two rounds though?
Haha, yeah! People say a million and one things; I was actually contemplating whether I should have faked an injury. The way he (Kevin Johnson) was talking was like he was going to end my career haha! But at the end of the day, I’ve got a job to do and I just want to handle business.

What piece of advice would you give to an aspiring sports person today?
Stick to something you’re good at and passionate about. Don’t do something because all your mates are doing it and don’t follow the crowd. So, what’s best for you and do what you’re good at.

Well, best of luck Anthony, it’s been a real pleasure chatting to you. Thanks! 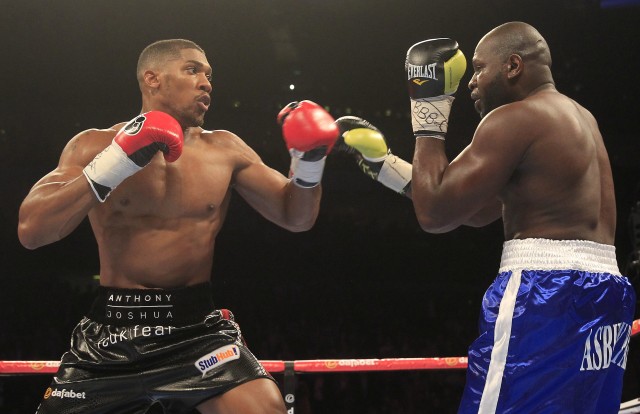