If you’re like me and you’re bit baffled as to why ‘Boxing Day’ is trending on Twitter in June – don’t worry, all will be revealed here! Two words – Football fixtures.

Lots of football fans are currently in despair as they try to get used to life without football. No doubt many of their other halves are enjoying actually being able to spend some quality time with them for a change, with the word ‘football’ not dominating the entire conversation.

Luckily for fans, as of today, they can begin to get excited about the upcoming season once again, as the fixtures have officially been released!

Time without football is even shorter-lived that usual, with the season starting a week earlier on Saturday 8th August, due to Euro 2016 commencing on 10th June.

Ok, so I’ve made you wait long enough. If you haven’t yet seen the fixtures, find out who your team will be playing here.

Hartlepool FC shared a joke with Yeovil Town FC on Twitter before the fixtures were released, suggesting that they didn’t want to play each other on boxing day due to both clubs being approximately 6 hours apart. 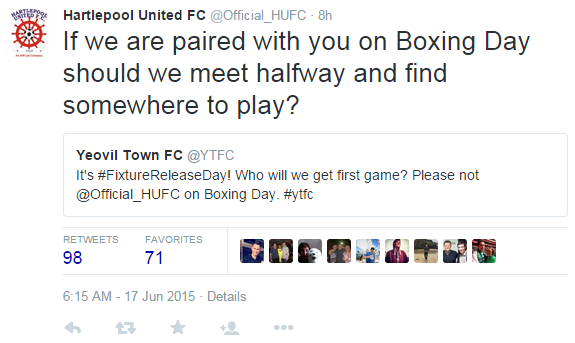 Luckily, much to the players and their fans relief, Hartlepool and Yeovil have not been selected to play each other on Boxing Day (few!)

Are you pleased with who your teams set to play when the season begins in August? Tweet us your thoughts @TheSPG