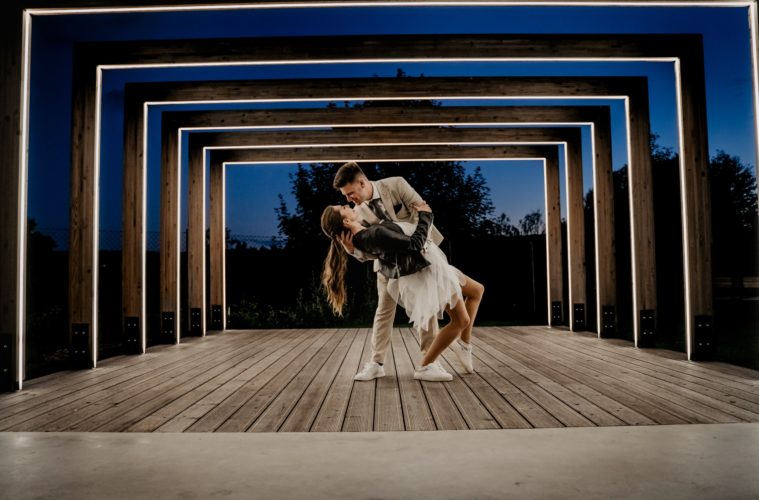 We saw this wedding dance and absolutely loved it, so we figured we just had to share it with you guys! Don’t worry, you can breath a sigh of relief because it’s certainly not the boring, traditional dance that you’re probably expecting…

Hands up if you love a cheeky drunken boogie on a night out? You know, the sort of dancing that makes you look like a complete idiot, but you’re so intoxicated that you don’t even care and start dancing with a friend like it’s your wedding dance.

However, due to social protocol, we all know there’s one time in our lives that we’re meant to tone down our not-so-tasteful dancing – during the first dance on our wedding day. Yet this tradition is now being broken, which is resulting in some pretty fabulous, hilarious wedding dances being created and going viral online.

The most recent of which, was created by newly-weds, David and Hollie Smith. The video was published on YouTube on 2nd August and has already received nearly 200,000 views!

It starts of with the couple embracing one another and performing what we’d class as, ‘the typical wedding dance.’ Romantic, slow, loved-up… it’s picturesque. Until, they abruptly and unexpectedly push one another away, give each other a cheeky high-five and switch into anything but a, ‘traditional wedding dance.’

The dance lasted a solid six minutes and regularly switches tracks. Songs such as, ‘I Like Big Butts’ by Sir Mixalot and, ‘Single Ladies’ by Beyonce featured in the mixtape. As well as the married couple getting their groove on, David and Hollie also got their friends involved, with the bridesmaids and grooms friends also being part of the funny routine.

So without further ado, here is Mr and Mrs Smiths awesome wedding dance!

While music and dance most certainly adds colour to the event, you should not ignore the literal colours and ambience of the venue. You can use cheap table runners for sale to ensure no guest feels you were underprepared.