David Beckham Defends His Decision To Give Harper A Dummy

No parent likes to be criticised and it appears heart-throb and ex footballer, David Beckham is no different. His decision to give daughter, Harper Beckham, a dummy caused a bit of an uproar amongst the public, so David took to Instagram to defend himself…

Dummies are rather controversial nowadays, with health experts warning that the popular pacifiers can cause dental and/or speech issues amongst youngsters, particularly if they’re used for an extended period of time.

So when photos emerged of 4-year-old Harper Beckham with a dummy in her mouth, some press reports were less than favourable, with some quoting the NHS Choices website, which claims children shouldn’t be using dummies beyond 12 months old.

Clearly outraged and offended by their comments, David took to Instagram to set the record straight. He wrote, ”Why do people feel they have the right to criticise a parent about their own children without having any facts? Everybody how had children knows that when they aren’t feeling well or have a fever you do what comforts them bet and most of the time it’s a pacifier so those who criticize think twice about what you say about other people’s children because actually you have no right to criticize me as a parent…” 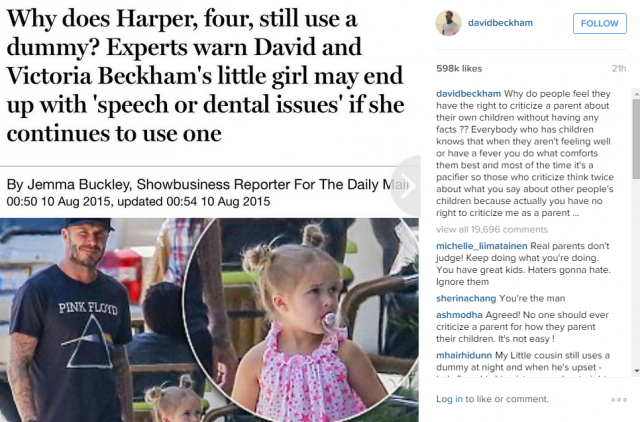 Fellow Instagram users and parents alike posted their support for the football-star, with one writing, ”Agreed! No one should ever criticize a parent for how they parent their children. It’s not easy!”