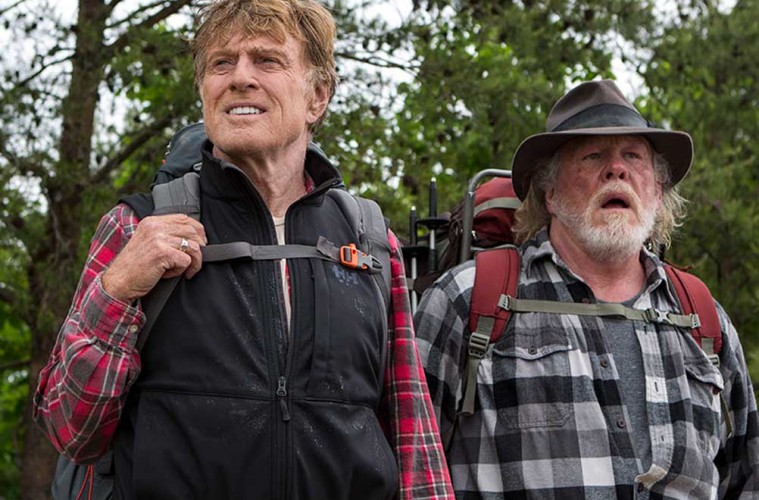 Film Review: A Walk In The Woods

Grab your boots! We’re off on the walking trip of a lifetime! A Walk In The Woods is an adaptation of Bill Bryson’s travel memoir of the same name, which recounted his attempt to walk the 2,200 mile Appalachian Trail with his long-lost friend Stephen Katz. Miles of breathtaking scenery, top banter and new experiences galore makes for a great book but, unfortunately, the same can’t be said for the film.

Flying in the face of warnings that such a long hiking trip is madness (not least from his wife, played by the ever-wonderful Emma Thompson), Bill Bryson (Robert Redford) sets out on one last big adventure to find peace and tranquility. The only trouble is, his walking partner Katz (a ruddy-faced Nick Nolte) has a rather different idea of what the hike will offer, namely an escape from unpaid debts and potential prison time.

The genesis of a screen adaptation of A Walk In The Woods has been a long one, and one which has been overseen by Redford for some ten years. Redford hoped to bring Paul Newman on board but Newman’s death in 2008 stalled the project. When Nick Nolte took on the role of Stephen Katz, who is as cantankerous as any walking partner could be, the book’s long hike into cinemas was nearly complete.

Opening with Bill Bryson giving a TV interview in which he can’t seem to get a word in edgeways, the film paints Bryson as a restless and discontented writer whose literary success and countless awards count for little. In order for him to be happy in retirement, a new adventure of self-reflection is needed. In reality, Bryson was in his 40s when he walked the trail, slightly different from Redford who will be celebrating his 80th birthday next year. This fact defines the film, which is stuffed full with geriatric jokes and laughs which revolve around Nolte and Redford’s longing for the good old days.

Anyone who has read Bill Bryson’s humorous and effortless prose will be ultimately disappointed with Ken Kwapis’ film. Glimpses of Bryson’s writing struggle through the screenplay which, unfortunately, is riddled with clichés and pedestrian dialogue. This is not to say that proceedings are devoid of any laughs, and occasional one-liners elicit a few chuckles. Nolte’s performance as Bryson’s washed-up companion also raises a few smiles but his gruff tones and bickering with Redford all seem a bit uninspired and unremarkable.

As the pair trudge through beautiful scenery (shot with a quasi-travel documentary edge), encounter bears and constantly bemoan their advanced age, their journey of self-reflection and redemption is pleasant enough to watch but one can’t help feeling that the whole thing is rather inconsequential. A thread of sentimentality runs throughout the film but, at times, borders on the ridiculous, especially when we see our protagonists in their sleeping bags staring up at the stars and pondering on opportunities missed and the futility of their lives.

On an overall level, A Walk In The Woods feels as if a tired and weary Kwapis made it the day after finishing the Appalachian Trail himself: the energy of Bryson’s writing is lost and the film’s lethargic pace threatens to smother the rather enjoyable comedic tone of the film. In essence, it’s less of a walk, and more of a slog through the woods.