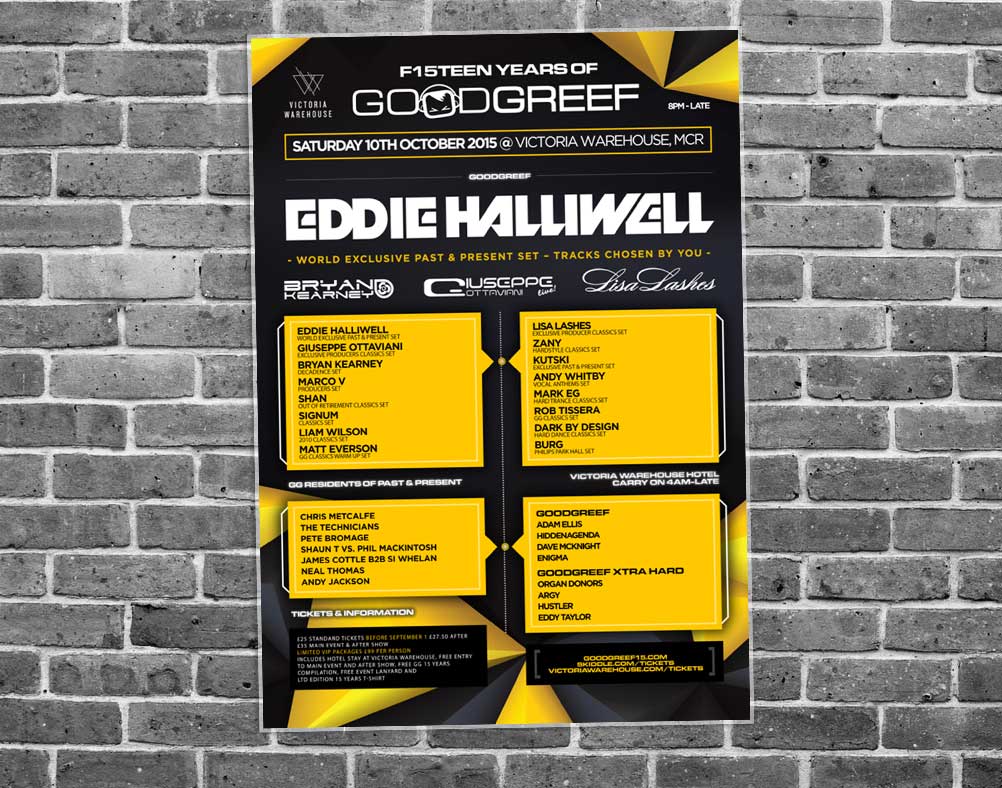 Love the hard dance and trance scene? Then you’ll be in amazement of the event that is about to hit the North West in a month’s time, as the world famous brand ‘Goodgreef’ are about to celebrate their 15th birthday in Manchester! In a modern time where club nights, DJ’s and genre’s come and go more times than a student at a buffet, Goodgreef have well and truly stood the test of time, securing a prestigious reputation on the circuit. As the most successful trance and hard dance brand in the North West, these guys are bringing everything and more to the table, making for one of the best parties around.

On October 10th, in what is described as one of the UK’s greatest venues in Victoria Warehouse, Manchester, Goodgreef are ‘Coming Home’ for a Past & Present & Future event, and they aren’t holding back one bit. Since being voted Mixmag’s “Club Of The Year”, the chiefs behind GG have booked DJ giants such as Hardwell, Tiesto, Paul Van Dyk, W&W and many, many more. Not only that, but these guys have successfully forged the careers of Eddie Halliwell, Alex Kidd and Jordan Suckley, and these three are going to be returning to celebrate the 15th birthday blockbuster too.

From massive world exclusive sets, to revival from retirement spins, the Goodgreef bonanza is going to go off with a bang and Manchester will be raving for days after this one, and with over 30 of the scene’s biggest names involved, you can see why. So, if you’re into trance, hard dance, anything in between, or you just like a party, you shouldn’t be anywhere else on the 10th of October but here.

And here is a few more from that whopping line up…

Lisa Lashes (back out of hard house retirement), Shan (out of retirement for one night only), Zany, Rob Tissera, Marco V and loads more!

Not only are the masters going off until 3 AM, but there is a promised after party too! So, if you can handle it, the guys at Goodgreef are taking the party to the Victoria Warehouse Hotel, where the madness will continue until an undisclosed ‘Late’

Get your tickets now from HERE! And don’t miss out because this will be the best 15th birthday party you ever go to. I don’t know what more you could want from a night, so roll on October the 10th!