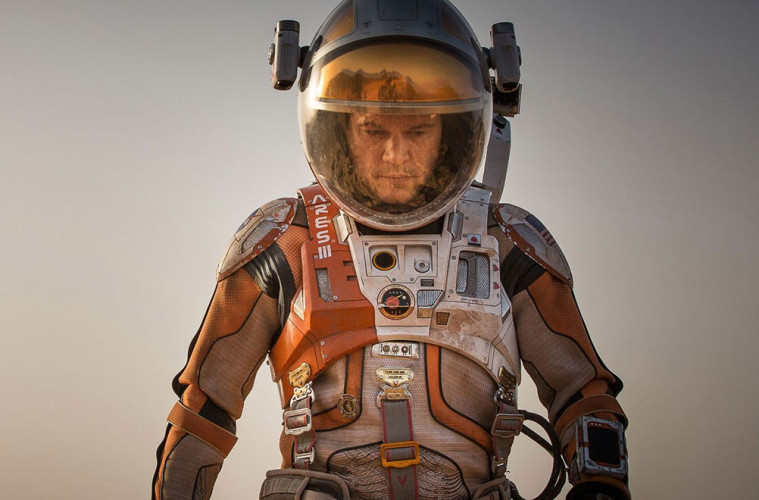 If we’ve learnt one thing from science fiction films, it’s that space travel never goes smoothly. Ever. Space adventures such as Apollo 13, Moon, Prometheus, Interstellar or Gravity certainly won’t be used in the promotional trailers for Richard Branson’s Virgin Galactic spaceline. But even if we’ve heard the words “Houston, we have a problem” a thousand times before on-screen, there’s something about man pitting himself against the incomprehensible vastness of the universe that keeps us coming back to the cinema for more (albeit with our feet safely planted on terrafirma).

And so it is with The Martian, a film as derivative as they come but with a glint in its eye and a captivating central performance which suggests that maybe, just maybe, experiencing the wonders of space might not be such a bad thing after all.

Matt Damon plays Mark Watney, an astronaut and botanist who is presumed dead after a manned mission to Mars goes wrong and a huge storm cuts him off from the rest of his crew. Faced with the realisation that he has no immediate way of contacting Earth and that help, if it comes, is three years away, Watney must survive on a planet which wants to kill him. The film, directed by Ridley Scott, is based on Andy Weir’s self-published book – an internet hit which, although a work of sci-fi, very much emphasised the science side of things.

One of Watney’s most immediate concerns is how to grow potatoes on a planet devoid of nutrients or water (it’s more compelling than it sounds, trust me). In his own words, he has to work out how to “science the shit” out of his predicament. Back on Earth, meanwhile, the initial elation on discovering that Watney is still alive soon turns to one massive techie headache: how can mission control possibly rescue him in time, before his meagre supplies run out? Finding solutions to the problem falls to NASA’s top brass, played by an impressive, if underused, cast including Jeff Daniels, Sean Bean, Chiwetel Ejiofor and Kristen Wiig.

Perhaps the most surprising element of the film is just how funny it is. After initially resigning himself to the fact that he’s going to die on Mars, Watney gives it his best shot to beat the red planet, approaching his task with a healthy dose of sarcasm and wit: “in your face Neil Armstrong!” he exclaims, after a small victory. This humour is reflected in scenes back on Earth, where jokes revolve around Lord of the Rings references: a refreshing change from the screenplay of Ridley Scott’s earlier film Prometheus, which seemed unable to go two pages without having protracted and contrived existential discussions on God and humanity. In contrast, The Martian is much more light-hearted and all-the-more enjoyable for it. When was the last time you watched a sci-fi film with a soundtrack from Abba?!

Jessica Chastain as the mission commander (with an unhealthy taste in disco music) is as brilliant as ever and Matt Damon, who has never had an issue about connecting with audiences, proves to be an endearing and magnetic protagonist. The success of the film is afforded, in a large part, by his screen presence and the ability to carry an audience with him through the film’s slightly-too-long 141 minutes. That said, the action never really drags, the nerdy banter stays fresh and the film’s denouement channels elements of Gravity to create a gripping conclusion to Watney’s ordeal.

The Martian is a welcome return to form for Ridley Scott and strikes the right balance between entertainment whilst touching on the serious issues of the human spirit and our place in the universe. The film’s script provides the solid backbone for a film which, whilst treading a well-worn path, manages to remain engaging and smart. It’s a lot of fun and will enlighten you on the life-saving properties of gaffer tape. If that isn’t a reason to see a film, I don’t know what is.