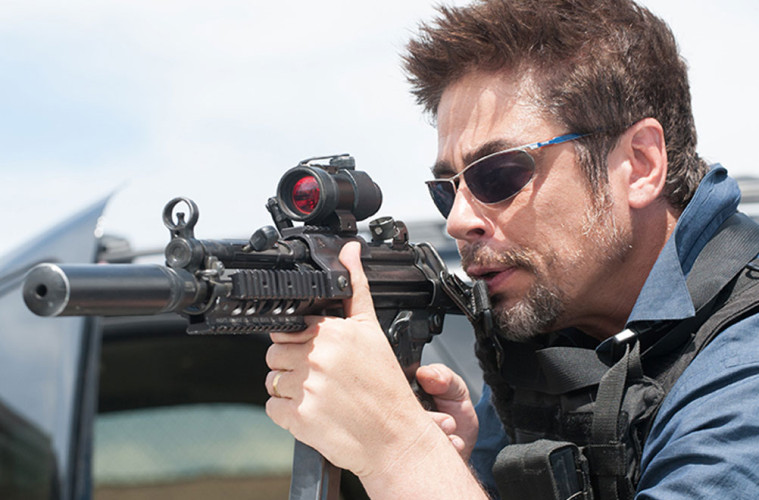 One of the joys of cinema is the way in which a whole host of different elements – visual imagery, sound, colour, dialogue and music – combine to entice an audience in to a filmic world and add a new dimension to much-explored subjects. Sicario is such a film which, even though its subject matter is no stranger in cinemas, demonstrates that when all the elements align, the results can be truly gripping.

There’s no doubt that Sicario, directed by the French-Canadian film-maker Denis Villeneuve (who was behind 2013’s Prisoners), is a grim watch. From the get go, Villeneuve shocks the audience, both on an emotional and visceral level, as we see FBI agent Kate Macer (Emily Blunt, at the top of her game) command a hostage rescue operation in the dry and suffocating suburbs of Phoenix, Arizona.

Tired with dealing with the fall-out from Mexican drug cartels, Kate is recruited by a flip-flop wearing drug-enforcement officer played by Josh Brolin, who wants her to join a covert black-ops mission south of the US border with Mexico. The film keeps the real reason for Kate’s recruitment close to its chest, but it soon become clear that she is the film’s sole moral compass.

Mexican cartels, drug smuggling and the blurred lines between good and bad is a well-worn area of cinema. Whilst the script offers few novel ideas on the subject, the way in which Villeneuve orchestrates his cast and crew transforms an otherwise derivative work into one which pulsates with tension. Benicio Del Toro is fantastic as an enigmatic agent with a troubled past and plays in dramatic counterpoint against Emily Blunt, whose assured and emotionally-charged performance soon wins over the audience. Kate’s navigation through the murky world of CIA tactics and her frustration at being kept out of the bigger picture is handled expertly by Blunt, and the physicality of her performance is compelling.

Aside from the impressive cast, the film is underpinned with a successful score by Jóhann Jóhannsson which pulsates and rumbles forebodingly. Such an arresting soundtrack, coupled with innovative sound design, propels the film along and constructs a world full of unknown threat and heightened hostility. Roger Deakin’s cinematography is equally as effective: never before has a traffic jam been so tense and the sweeping helicopter shots over Juárez paint a desert landscape free from the rule of law. At two hours, the film just about manages to keep up its momentum and even the more lethargic scenes don’t detract from the impressive action set pieces. Think Zero Dark Thirty meets Call of Duty.

Sicario is a film which seems to be just as aghast and dismayed at its subject matter as Kate; its bleak tone is intensified through its unflinching treatment of violence and Emily Blunt’s superb performance centres the film in reality. Ambiguity runs riot, morality hardly gets a look in and whilst it may not be ground breaking, the film certainly grabs you by the throat and never really lets go.