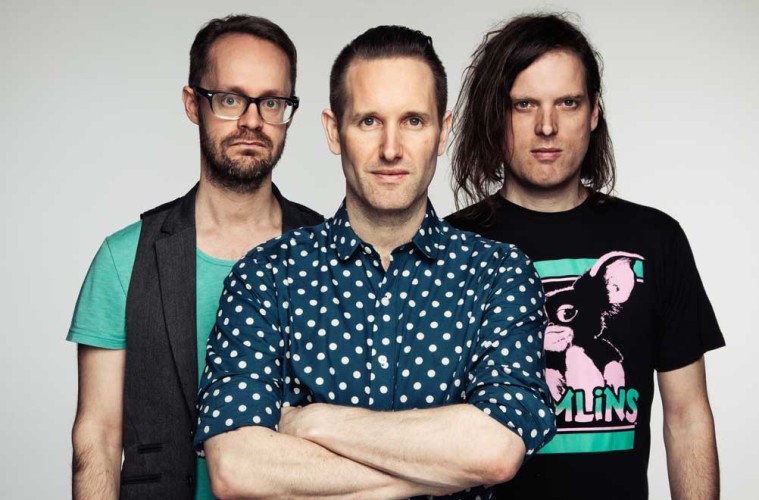 Are you a big fan of Ash?! Then stay right where you are. We caught up with the band’s drummer, Rick McMurray to discuss their latest album Kablammo!, their new single and going on tour in December…

I’m good thank you! I can’t believe you guys met back in high school when you were just 12 years old! Were you all into music back then?
Tim and Mark met when they were 11-years-old and decided they were gunna get a guitar for Christmas. I actually met the guys a few years after that. I think they were getting on a bit – they were like 15 or something! But yeah, back at that age I was getting into music and around the age of 10/11 I started learning guitar. A few years after that I got into the drumming thing. So yeah, it’s definitely been something we’ve been passionate about since a very early age.

Did you have a feeling that you guys had something quite good going on even at that age?
I think Tim and Mark immediately started a band before they’d even learnt their instruments! I think they started writing their own songs because they couldn’t play anything else. After a few years that grew into a metal band. Just before I joined they were in band called Vietnam. It’s a terrible name but what are you gunna do when you’re like 12 years old?! I remember seeing them play gigs and they weren’t great to be honest. You could tell these two guys had learnt a little bit but were still a pretty bad singer and a pretty terrible drummer. It was pretty chaotic. Then later on they found me, found a drummer and we started out. Within a week we were starting our first demo, so it was all pretty instantaneous when we got together.

You released your latest album Kablammo! in late May. It’s been 8 years since you guys have released an album. Is there a reason for the long gap?
Well when we released what we said was gunna be our last album ‘Twilight Of The Innocents’ in 2007. We kind of declared at that point we weren’t going to do another album – that was gunna be our last. I think at that point album sales were completely collapsing and record companies were freaking out, but they didn’t seem to want to do anything to change the way music was released.

We felt it was an opportunity to find a new business model and we decided we were going to release singles only from that point. So we did the A-Z series in 2009 and 2010, which was releasing 26 singles in a year. We kind of figured that was the way that people were buying their music, but then it became apparent that the death of albums was a bit of an exaggeration and people started getting really into vinyl again.

We still had a love for the album and when people started buying it we thought. ‘ok, we’ll go back to the album format.’ We were kind of worried about that after making such a big statement, but I think our fans have been pretty happy about it and we’ve not had too much of a grilling over it! It was sort of a good pressure for the album because we thought if we’re gunna return to this we’ve gotta make it stand up with our most loved material. The album does have a similar flavour to 1977 and Free All Angels.

Talking of which,  ‘Free All Angels’  was your 3rd studio album and was released back in 2001. It was hugely successful. How did it feel for your album to reach number 1 and did you ever expect it to be so big?
We’d had a number 1 album on 1977 but at the end of that album we kind of hit the self destruct button with the next album cuz we found ourselves around the world being marketed in a little bit of a boy band way, which was not where we were coming from at all. The follow up album didn’t do so well, which was very much a reaction to that. It still went gold but it was kind of perceived as a disappointing second record.

A lot of the contemporary bands at that time were splitting up or getting dropped by their labels and with Free All Angels we felt it was potentially our last bite at the cherry. We were young, full of confidence so we were like if this is going to be our last album, we’re gunna make our best album yet and prove everyone wrong. If we’re gunna go down, we’re gunna go down in a blaze of glory kind of attitude when we were writing that album.

We thought ‘Shining The Light’ was definitely going to be the comeback single and the record company were like, ‘It’s not a single.’ They said they weren’t going to pay for us to go into the studio, so we used some of our last remaining money, recorded it, sent it to the record company and they were like, ‘Alright, ok, message received, you guys are right.’ So that was a really bold move on our part and it really paid off, that as probably one of our biggest singles and it really set the album up for going to number 1, so we thought ok, it could be a number 1 record, but there was a lot of competition at the time. Jannet Jackson hadn’t had a number 1 at that time, so we thought she was going to outsell us, but we managed to hold on, so it was a pretty good feeling.

We had a nosie on your Twitter page and we love the hashtag #ashtag – how fitting! We found out on their that due to the success of the album, you decided to record acoustic versions of a few of the songs and give them away as free downloads. Was this because you wanted to give back to the fans?
We’d done a pledge music campaign for the album, so we’d had real support from people, so we wanted to give back. We have an incredibly loyal fan base, but it’s still an amazing thing for them to put the money upfront before they’ve even heard a note of what we’ve recorded. You can’t really give away too much up front, we don’t want to spoil any surprises, but once it’s out there, I think it’s good to give away a bunch of stuff.

Your latest single, ‘Machinery’ was taken from your latest album which was released on October 9th. How would you describe the track?
It’s probably one of the most different songs on the album. I guess I’ve been talking about how its like 1977, but I think this ones a little bit more out of our comfort zone. It’s one of Tims best melodies, the chorus just keeps building and building towards this climax and I think it’s just a really beautiful song.

Pressure time now – what’s your favourite song on the album?
Cocoon, which was the song we launched back on Ash Wednesday (see what we did there?!) We’d been waiting 20 years to use that, I don’t know why we hadn’t used it sooner!

Are some of them tracks on the album songs you’ve had for quite some time then?
With the A-Z series we kind of cleared the decs on that project, along with 26 singles and a bunch of bonus tracks we did. We ended up releasing close to 60 songs, so we very much had pretty much nothing left. Everything been written in the last 2 years since we decided we were gunna do a new album, it’s all brand new stuff. We do actually have a bunch of stuff left over, so we’re gunna need to figure out where to put those, so whether that’s more free tracks, an EP, or a single or something – we’re not quite sure yet.

You’re going on tour from 2nd December – 14th December and are stopping off in our home town of Norwich on the 12th! Tell us about the tour! Will you be playing material from your old album as well as some of your classic tunes?
Looking back on our previous work while we were writing this album, it was a great thing for us to do. This summer, whilst we were at festivals and stuff we’ve been playing a good bunch of the new stuff. It’s hard to do when you’ve got such a back catalogue, people are there to hear the hits, but I think it’s been working really well amongst all the hits, so there’s going to be a good balance of both and we’re definitely getting great feedback from our fans. We’ve never been a band to shy away from the hits, we love the reaction they get.

Asylums are supporting you on tour, what made you choose these guys to be your support act?
Our agent alerted us to those guys. They sent us a couple of links to YouTube videos and we just felt like they were a really good fit for the bill. They’ve got a similar energy to us and I think it’ll make for a good show!

I can’t believe I’m asking this already – but do you have any plans for 2016? What’s next for Ash?
There’s still a lot of touring we need to do. I think we’re going to Australia and Japan early next Spring and there’s a few other places we’re trying to hit as well, but we haven’t got confirmation yet. We’ll be finishing up touring the album. Next year’s also the 20th Anniversary of 1977 so I guess we’re gunna have to do something special for that, which will be fun. But we also really wanna get back in the studio as soon as possible. We really enjoyed the process of making a new album and keep that creative flow going.

Well best of luck for the tour and everything, I hope it goes really well and thank you for talking to me today Rick, it’s much appreciated.
Thanks so much! It was an absolute pleasure – enjoy your Friday!

Thank you! Enjoy your Halloween! Have you got any plans?
I think I’m going apple picking today with our sound engineer and they’ll probably be a few kids around having some Halloween games and stuff and maybe taking my daughter out trickle treating tomorrow.

Aw that sounds fun, have a great time!
Thanks – The apples are for cider by the way!