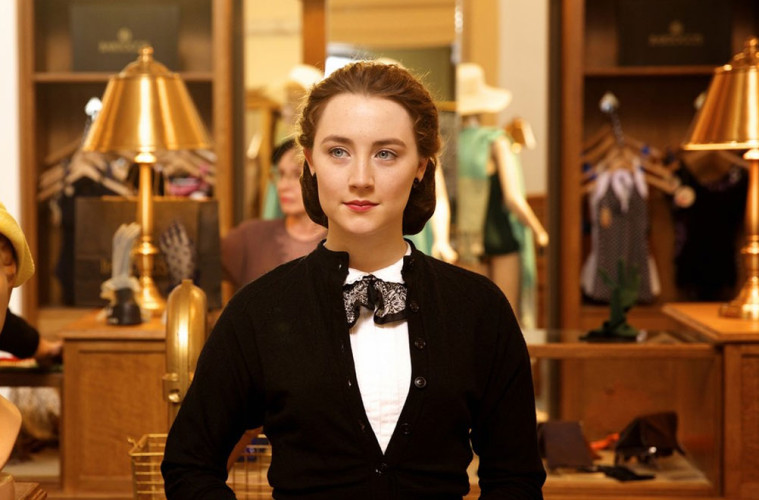 As career beginnings go, Saoirse Ronan has done pretty well. The Irish-American actress counts the likes of Keira Knightley, Wes Anderson, Cate Blanchett and Peter Jackson as colleagues, and her performance as Briony Tallis in 2007’s Atonement earned her an Oscar nomination. Not bad for a 21 year-old. Her latest film, Brooklyn, is emblematic of this much-deserved success.

Deftly adapted by Nick Hornby from the novel by Colm Tóibín, Brooklyn is a heart-warming – and heart-breaking – drama starring Saoirse Ronan as small-town, and rather unremarkable, Irish girl Eilis Lacey, who emigrates to New York in the early 1950s in search of better job prospects and a more fulfilling existence. Leaving behind her much-loved mother (played by Jane Brennan) and sister (Fiona Glascott), Eilis embarks on the (rather fraught) trip across the Atlantic which has been organised by Jim Broadbent’s benevolent priest, who acts as a comfort when the inevitable homesickness kicks in.

Her new life in Brooklyn is both alien and overwhelming, and Eilis struggles to shake off thoughts of home. A job in an up-market department store does little to bolster her spirits and even Julie Walters on top form as Eilis’ landlady seems unable to cure her longing for home. That is, until Eilis meets an Italian New Yorker at an Irish dance and her whole outlook changes. Emory Cohen plays the sweet Italian plumber, and plays him with such a naturalistic style that the pair’s subsequent romance is utterly convincing. But, just as the audience have dried their eyes after Eilis’ initial departure, tragedy strikes back in Ireland and Eilis must briefly return to her old life.

On arriving back, she meets Jim Farrell (Domhnall Gleeson) and finds herself experiencing the life, and love, she could have enjoyed, had she stayed in Ireland. The tensions here between family loyalty and personal happiness and notions of belonging and home will strike a chord with many, and the film’s essential question boils down to whether Eilis will stay in Ireland or return to New York. Under a lesser director, this emotionally-charged, but fairly predictable, subject matter could have spilled over into saccharine cliché, but director John Crowley allows the plot to mature and unfurl in its own time, developing characters who really seem to matter to the audience.

Crowley’s direction is restrained and understated, but all the more affecting for it. A scene early in Eilis’ Brooklyn life sees her help out at a church-organised dinner for the Irish elderly – men who helped to build the bridges and tunnels of the New York metropolis. One of the men gets up and sings a traditional Irish song, evoking memories for Eilis of home. It is a moment which could easily have had the audience sticking their fingers down their throats, but the film’s perceptive dialogue, engaging characters and fantastic performances unite to make it very moving.

On the subject of performances, Saoirse Ronan really is the lynchpin of the film, captivating the camera with her electric-blue eyes as it focusses on her in tight close up, capturing her transformation from a rather uninspiring girl to a confident young woman. The portrayal of a woman stuck between two worlds – the old and the new; America and Ireland; opportunity and missed opportunity – is handled beautifully by Ronan. Visually, the film is a treat and the production design for the 1950s hair, clothes and scenery is wonderfully rich, complemented by the great cinematography.

In narrative terms, Brooklyn is hardly revolutionary, but the sum of its parts adds up to be much more than a simple tale of new beginnings. It would be almost impossible to drown Saoirse Ronan in superlatives: she is sensational. The drama envelops the audience totally and affectingly, and is often as funny as it is poignant. Oh, and in case you’re wondering, it’s pronounced “Sur-shah”. And “Ay-lish”. You’re welcome.