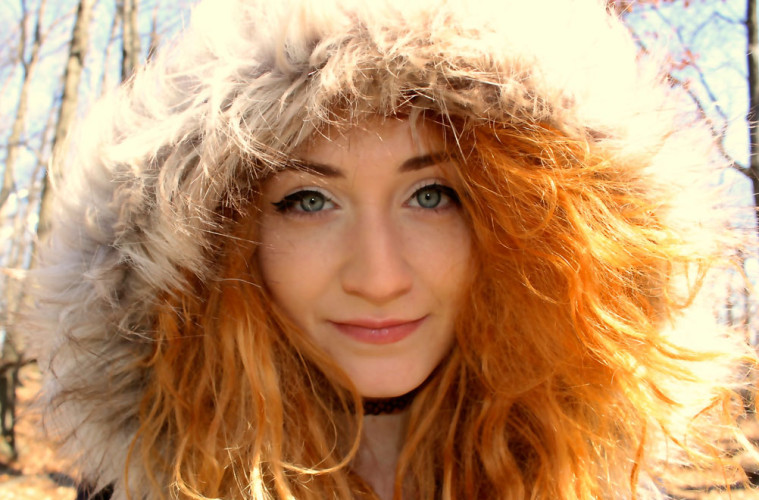 She’s been so busy recently she informed us that she’s been working 18 hour days, but we managed to steal a moment with the lovely Janet Devlin to talk about her new EP, as well as her upcoming album…

I’m very good thanks, how’re you?

I’m good thank you! I’ve just got to say, I went on your Twitter and I love your hair!
Thank you! It’s been this colour for about a year. It needs to be redone though cuz my blonde bits are coming through and I don’t really want the world to know I’m not natural!

Aw, it looks very natural – it suits you, I like it!

I was going to start by saying that I read somewhere when you were younger you used to take yourself off to your parents shed and teach yourself how to play instruments and write your own songs. Did you always keep your musical talent quite secretive?
My parents knew I could sing and they knew I wrote poetry and  songs, but I wasn’t confident with it. I never thought it was a possibility and I always thought it was really bad, so I hid it away and never played to anyone. I kept myself to myself when it came to music. If anyone asked me, ‘Do you sing?’ or, ‘Do you play anything?’ I would’ve been like, ‘Nah, no I don’t.’

Aw bless you! So how many instruments can you actually play?
I used to play the drums. My goal as a fifteen year old was to play drums in an all female pop rock band, but that didn’t happen. I play a bit of guitar very badly and I play the ukulele – his names Eugene.

Ha! Do you name all your instruments?
I pretty much do, yeah! The last one I play is the Irish penny whistle.

Did you always know that music was something you wanted to do?
It was! I always wanted to do music. I remember telling my mum one day. She said, ”Janet, what do you wanna be when you grow up?’’ Young Janet was like, ‘’Oh, I wanna be a singer, I wanna be in music.” My mum was like, ”Yeah, good luck finding that on the jobs list.” She was just a realist because it’s a very impossible dream really.

So something that’s really topical at the minute is The X Factor! You took part in the eight series of the show.  What was it like meeting and working with the likes of Louis Walsh, Tulisa, Kelly Rowland and Gary Barlow?
It was good. It was such an intense period of time. It all happened really really fast, I’m not gunna lie. It was fast paced living really!

Have you been watching this years show?
I haven’t. I haven’t even had time to bless myself recently. I’ve just been working like 18 hour days at the minute, so I’m too tired to watch X Factor.

Wow! 18 hours! What have you been up to?
I’m doing a pledge music campaign, which means there’s a lot of merchandise which needs to be fulfilled. I need to write out a lot of lyric sheets, sign a lot of cards, sign albums and sign CD’s. It takes quite a long time to do it. I’ve also been doing a lot of filming, a lot of YouTube stuff and music videos. Then I’m off to New York on Wednesday to do even more promo because they’re releasing the EP out there, so I’ve got a very busy schedule!

Speaking of which, I read that you got inspiration for your Christmas EP, ‘December Daze’ when you were in New York…
Yeah! During my first trip over it was like super snowy. It was like minus -18/-19 degrees and I was walking around like, ‘Omg, this is major Christmas time’ and I was thinking of Home Alone, Elf and all the films and stuff. Luckily I had my guitar player there and I was like, ‘Right, we’re going back to the hotel room and in between interviews we’re gunna write a Christmas song.’ So that’s how December Daze happened and it’s been a little bit of a snowball ever since.

So did you actually plan on releasing a Christmas EP, or was it because you went to New York and got inspiration for a Christmassy song that it then came about?
That was it! I wrote the song and then I kind of came back still writing Christmas songs. I turned around and my manager was like, ‘What about maybe making an EP?’ Obviously it’s not as easy as  just ‘making an EP.’ It’s all in time and schedules and stuff to try and get it done, but we did it, so it happened. It’s New York’s fault for this EP!

As well as your EP you’re currently doing a second album as well, which is called, ‘Holy Water.’ Have you started writing songs for it yet?
Yeah, I’m a good 15 songs in, but I wanna have way more than that. Like, I wanna have so many that I’m bombarding myself. So writing has commenced for that which is always fun, but it’s hard to get time to do it at the minute. I think over Christmas I’ll properly put my head into it and get as many songs as I can done for it.

Your first album, ‘Running With Scissors’ was about growing up, becoming independent and dealing with a range of emotions. Do you think this album follows a similar theme or do you think it has a different path?
No it has a different path. This one’s called Holy Water (at the minute) and it’s the whole idea of confessing sins that you can never be fully reconciled for unless you tell it to another human being and admit it to yourself. By writing about things that I’ve done, by putting it out there and letting people hear it, I’ve techniqually told them and I can be forgiven. So by the end of that album I’ll feel cleansed!

You recorded your second album in 6 weeks. Do you have an idea of when you want the second album to be released at all?
I would absolutely love to have it out by summer of next year so I could take it on the road and play it to people and things like that.

So you wanna go touring next year? Is that part of the plan do you think?
Yeah I think late next year I would definitely like to tour my next album.

On your first album you collaborated with Newton Faulkner. Do you have any collaborations planned for the next album?
I’m looking into finding the right people to work with. Newton was perfect for the first album. We’ve been working together on this one as well actually – we’ve been writing. In terms of duet I don’t know. I’ll see if I can find someone whose willing to be involved, we’ll see!

Back to Christmas for a moment – do you have any plans this Christmas time?
I’m just going to get fat and watch Netflix really! At the minute everything is so bonkers I know I’m gunna crash. I’m probably going to get sick when it comes to Christmas because I’ve been working so long. I just wanna chill out and see my dog, my family and my friends. Just be a human being for a little bit.

Sounds perfect! Thank you for talking to me, I hope you have a great Christmas and best of luck with the EP!
It’s been great, thank you so much for having me… you too!