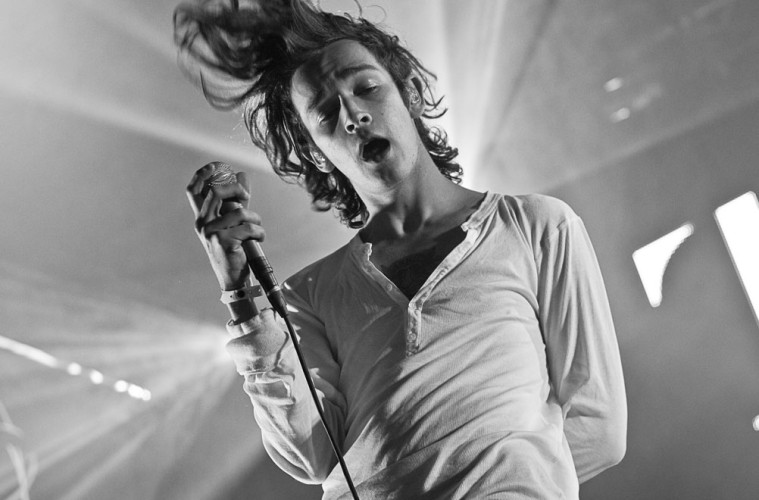 Don’t you just love it when your favourite band performs in your city?

Last week, thousands of students from DeMontfort University and the University of Leicester were lucky enough to see The 1975 live.

After months of being very quiet, the band announced a tour across the country that was aimed at them performing at smaller venues.

They have recently changed their style of music and wanted their old fans to get one last taste of their old sound. Aw, ain’t that sweet.

The gig was at DeMontfort Hall in Leicester on the 10th November. And what a night to remember it was!

The queue to get in was huge, but no one seemed to care about that. “We just want to see Matty”, yelled someone behind me, who before this revealed he was a second year DeMontfort student.

Once inside the atmosphere became electric. The 1975 had their trademark stage set up – four glowing rectangles in the background to represent each one of them.

As the lights went down everyone knew what would happen next. It seemed like half an hour, but was probably only five minutes and the boys made their appearance. They leapt onto the stage and instantly started playing their newest single ‘Love me.’

On the projector behind them, a different video played relating to each song. Just another aspect of their originality.

The energy continued all the way through the show; you really couldn’t ask for more from them.

The charisma that they have is incredible.

At one point they had a fake cigarette as a prop while singing their heart out to a love song. Bet that broke a lot of girls hearts.

They played many songs off their first album including ‘Chocolate’, ‘Sex’ and ‘Girls.’

Even more enjoyable than that was their less popular songs that only their true fans knew about. From ‘Falling for you’ to ‘You.’ Whether you knew the songs or not it would be very hard not to fall in love with every one they performed.

Before The 1975 could perform their last songs the fire alarm went off! Yes, that’s right. Apparently the smoke machines were all too much for the hall…

However, they all returned and again performed the song they were in the middle of, Matty with his top off and all.

The 1975 have not given themselves a break and will be touring their new album in March 2016, after the release of their second album in February 2016.

It’s all happening next year! We can’t wait. Get your tickets now students! We’re afraid there’s no student discount though…