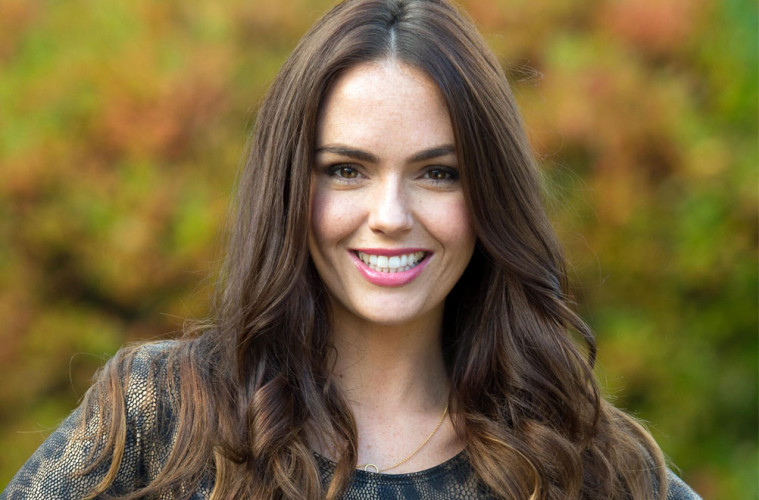 With her tenth anniversary in Hollyoaks on the horizon, Jennifer Metcalfe, who plays Mercedes Browning, took a few minutes off set to chat to us about maintaining a healthy lifestyle at uni, some dressing room secrets and what you should have in your wardrobe this winter, and here is what was said…

I’m great thank you! First of all, you’re now in your ninth year in Hollyoaks as Mercedes, so what have been your biggest highlights so far?
There have been so many. It’s actually now coming up to our tenth year, as it’s my tenth year in April. There are so many things, but probably more off screen than on screen, like the people who I work with everyday are amazing. It’s like a big family. I’ve had amazing storylines over the years, but the people are the ones that stand out to me and make me want to stay.

Cool! Have you got anything planned for your tenth year celebration?
I haven’t but someone asked me that the other day, so I think I better get planning and we’ll all have a good party! We had an amazing one for the Hollyoaks 20th, so I think I deserve one for my 10th.

Definitely! And what would you say are your favourite things about the Chester village?
The set itself is actually in Liverpool. For me, it’s a great city and I had to move there for a job, but to move to a great city like Liverpool, it took the edge off of things.

On the streets, people must come up to you and call you Mercedes in real life, but what is the funniest thing anyone has ever said to you?
I think for a character that can be loved or hated, I haven’t had that many things called out to me on the streets. I’ve heard worse off of my friends about their characters. But I think I’ve had quite an easy ride; I have had the occasional person shouting ‘Mercedes’ but other than that, I can’t think of anything off the top of my head that has been that bad.

Do you think you relate to Mercedes at all in your everyday life?
Not at all, thank God! I look a bit like her and sound a bit like her, but that is probably it, and I say that with pride! haha.

Haha! So, what would you rather personally, a swanky meal at The Hutch or a pub lunch and a pint and The Dog in The Pond?
Dog int’ Pond.

And what would be your meal of choice?
I can’t remember what’s on the menu. I know The Hutch has got a great lamb dish on there at the moment; a lamb and rosemary dish, but I can’t think of what of what we’ve got at the Dog int’ Pond. I think they had quite a good prawn dish on the starter, so maybe I’d go for a little bit of tapas.

Sounds good! Moving aside from Hollyoaks, you studied a degree in Health and Fitness. Did you manage to sustain a healthy lifestyle at university?
Yeah, yeah I did. I stayed at home when I studied in Bradford. So yeah, I did reasonably and I did love a good drink and night out with the girls, but it did help that I did it at home. Sometimes I think did I miss out on the experience but I suppose my bank balance got saved, so that’s a good thing!

That’s always a plus. And what tips would you give to students today who are struggling to maintain fitness and staying healthy?
At the minute, I’m doing a lighter life fast, so five days you eat what you want and two days, you do the fasting. People should look into that because that’s amazing! It’s really reasonably priced; you can store it in your cupboard, so there is no preparation time and you don’t need a fridge or anything like that. I think, as a student, if I would’ve known about that back then, it might have saved me because it’s so reasonable and it does work around your lifestyle. So, you can just have your five days of going out drinking and eating what you want with your friends, and then you can have two days of being on the fasting diet. Also, just try and get to the gym because it takes off your hangover. If you’re feeling a bit groggy the next day and you want to brush off the cobwebs, the best thing you can do is go to the gym.

It’s all about getting through that initial barrier of stepping into the gym!
Absolutely, yeah!

Not only that, but you’re quite a fan of fashion too, so what three items are essential in your wardrobe during winter?
Thigh high boots, a nice big winter jacket and a woolly hat. If you’ve got them three, you can sling on what you want under it and it still looks good!

Perfect! Going back to Hollyoaks now, which character would you most like to have as a best mate in real life and why?
I think Jack? He’s got some real words of wisdom and I think Mercedes would appreciate his experience.

Sounds good! When off set, which people (or person) is the biggest party animal?
We aren’t as bad as we used to be… There are a lot of new characters that I haven’t had the opportunity to work with yet. So maybe they are… It seems like when you start Hollyoaks, that’s when you have your mad time and sort of mingle in with everybody. But these days, my generation that came into it, we’re quite chilled. I can have a good drink with the rest of them at the awards, so…

I suppose you’ll find out on the Christmas do anyway! And are there any dressing room secrets that we should know as viewers? So things like cast member habits etc…
There is too many and I wish I could say but… let’s just say our changing room has got the smelliest toilet! It’s horrendous! And that’s all I’ll say, as the other girls might not like it.

Haha, not dropping anyone in it! Finally, and this is a bit of a shot in the dark, but have you got any sneak previews as to what is going to happen in 2016 in Hollyoaks?
There’s always some hard hitting storylines; there is always drama. With my character, I’m with Joe and Lindsey, but Lindsey is trying to bump Mercedes off to get to Joe. She’s the glove hand killer and she’s trying to get rid of Mercedes to get to Joe, so for me, my life is in the pipeline for the next few months.

Suspense! Thanks for that, its been good to chat to you. Best of luck with Hollyoaks!
Thanks Lewis, bye!