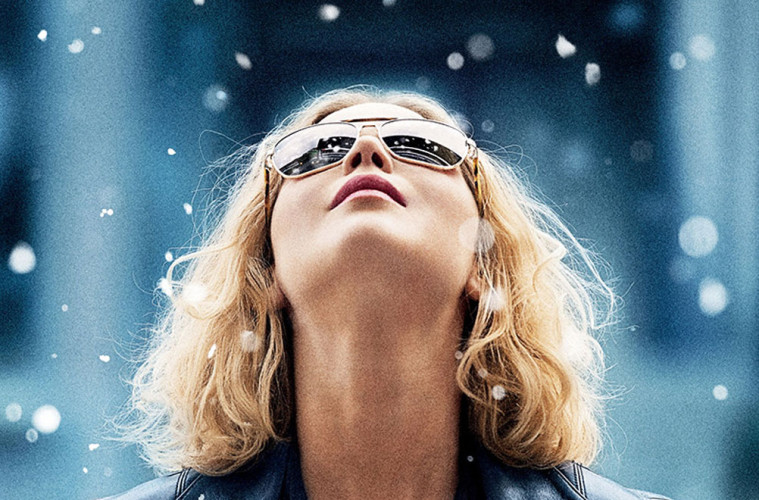 It is testament to Jennifer Lawrence’s star power that she can be glorious whilst selling mops. These mops, however, are not any ordinary household cleaning implement: they are the ‘Miracle Mops’, invented by real-life single mother Joy Mangano who made a fortune selling them on the QVC shopping channel. Not the most compelling true story for screenwriter Annie Mumolo and director David O. Russell to tackle, but in Joy, their efforts result in a strange combination of surreal drama, the occasional laugh and fleeting moments of heartfelt emotion.

Joy is not, of course, the first film which brings together Jennifer Lawrence with David O. Russell. Nor is it, indeed, her first time acting opposite Bradley Cooper and Robert De Niro (both starred alongside her in Silver Linings Playbook). Lawrence plays Joy, who is struggling to find happiness and satisfaction in her life, largely as a result of her dysfunctional family. Her invalid mother (Virginia Madsen) stays in bed all day watching soap operas, whilst Joy’s ex-husband (played by Édgar Ramírez) lives in the basement of her house. Her hapless divorced father (De Niro, in the slightly eccentric paternal role in which he seems to be typecast nowadays) returns to the domestic mix, also temporarily moving in to the basement after splitting with his most recent partner. Only Joy’s grandmother Mimi (Diane Ladd) and best friend Jackie (Dascha Polanco) seem to act as encouraging voices of sanity.

Compelled to make more of her life and, in many ways, to disprove those (including her parents) who said she should be content with banal domesticity for the rest of her life, Joy invents a self-wringing mop after a mishap with red wine and broken glass on her dad’s latest lover’s yacht. This plot – a story of invention and self re-invention – works well, leaving the audience satisfied as Joy takes on the male-dominated corporate world and transforms her life. But this fulfilment in narrative terms is eclipsed by the film’s tone which is, quite frankly, all over the place.

David O. Russell’s direction is as confused as it is full of ideas. The dissatisfaction with life which Joy feels is established early on through the bizarre behaviour of her family and much of the film’s beginning is punctuated with rather surreal sequences in which Joy finds herself trapped in her mother’s soap operas. By the film’s end, however, this rather kooky tone is lost as Lawrence struts down the road after a successful business deal, sunglasses on and ready to tackle the world of domestic cleaning.

The screenplay is peppered with humorous moments but it doesn’t develop as a comedy – which it certainly could have done with Lawrence’s comedic flair. Neither is it, however, a straight-down-the-line drama. Instead, the film floats about between reality and unreality, playing with ideas but never fully-engaging with the emotions it seeks to interrogate. Instead, it navigates its themes of family, business and success without settling on what any of it actually means. Joy’s story, whilst transformative on a personal level, leaves the rest of us a little disengaged with proceedings.

That said, the performances are great: Bradley Cooper, as a QVC executive, does well and Jennifer Lawrence is her usual brilliant self as she attempts to anchor the film’s disparate elements. Her face magnetises the camera and allows the audience to empathise with her character’s situation, even if not with the film as a whole. But despite her star power, the film feels too uneven to create emotional coherency with its audience, something which it needs desperately, given that its subject isn’t the most exciting in the world.

Joy has individual scenes which are touching and emotionally-charged. Lawrence is, as ever, fantastic, and there’s certainly a message of morality to be found. But I can’t help feeling that audiences will leave the cinema confused. Perhaps a repeat viewing is required, but Joy is far from the joyous New Year film which many will be expecting.