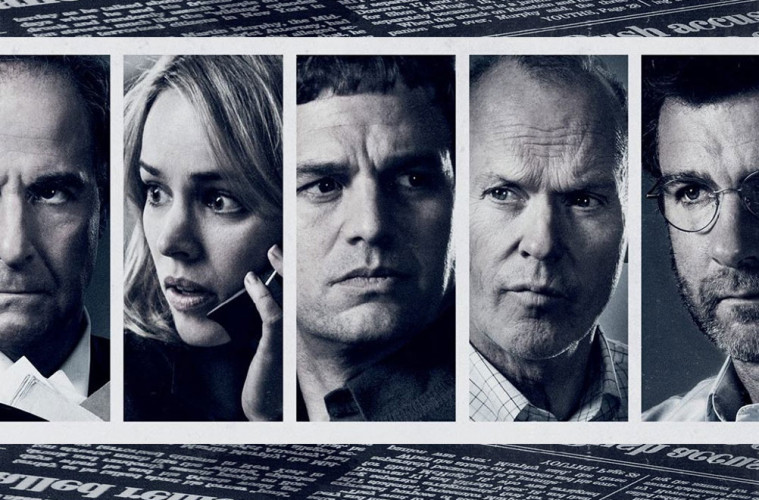 Arriving in UK cinemas on January the 29th, Tom McCarthy’s Spotlight brings with it a huge amount of Oscar buzz and critical acclaim. Spotlight tells the true story of the group of investigative journalists working for The Boston Globe newspaper, who in 2001 unearthed a huge child molestation scandal within the Catholic Church. The film certainly seems to bring the acting chops to live up to the hype, with Michael Keaton, Mark Ruffalo and Rachel McAdams leading an ensemble cast. But does Spotlight deliver on the rest of it’s hype? Read on to find out.

With Spotlight, director McCarthy believes in his source material and takes the “less is more” approach to directing. The film has no unnecessary fat on it’s bones, and this is an excellent decision to make. The story behind the film provides more than enough dramatic scenes to give Spotlight emotional heft. Repeated shots of journalists running, journalists talking, and journalists working in an office at first seem to show the film struggling to provide enough excitement to keep viewers gripped, but this is not the case. Subtle changes in actors’ performances and set, such as mountains of newspaper clippings and evidence growing to match the increased tension as the scandal unfolds, give the audience something to anchor the excitement on screen. Keaton appears to be the standout performance in the film, although Ruffalo got the Oscar nomination for best supporting. As the senior member of his team and an experienced and conflicted investigative journalist, his character Walter Robinson is arguably the focal point of the film and is part of the real story that Spotlight tells, a story about struggling to deal with the sins committed in the past and to make them right.

The film is so straight to the point and focussed however that many viewers may find it a little dry, and perhaps more than a bit humourless. Of course, given the event that Spotlight is based upon a lack of humour in the story may make sense, but nevertheless you would be forgiven for finding the film a little slow if used to a more upbeat style of directing. The film tells a dramatic story, and it tells it well, however there are only so many times you can show scenes of journalists running through the streets to get to their latest revelation or bit of evidence before they all start to look alike. There are still however, plenty of scenes which will hit you like a punch in the gut with heavy and real feelings. Aesthetically however, Spotlight definitely struggles to stand out in a year in which we saw Mad Max: Fury Road, Star Wars Episode VIII and The Revenant, films which were each a visual masterclass in their own right. The straightforward cinematography do however ground the film in absolute realism.

Spotlight is a great film, and it treats it’s real life narrative with a respect and a reverence which “true to life” films rarely do. Though perhaps a bit too firmly fixed in the real world with barely a whisper of sensationalism, acting and direction work together to bring audiences a story which needs to be seen to be believed.