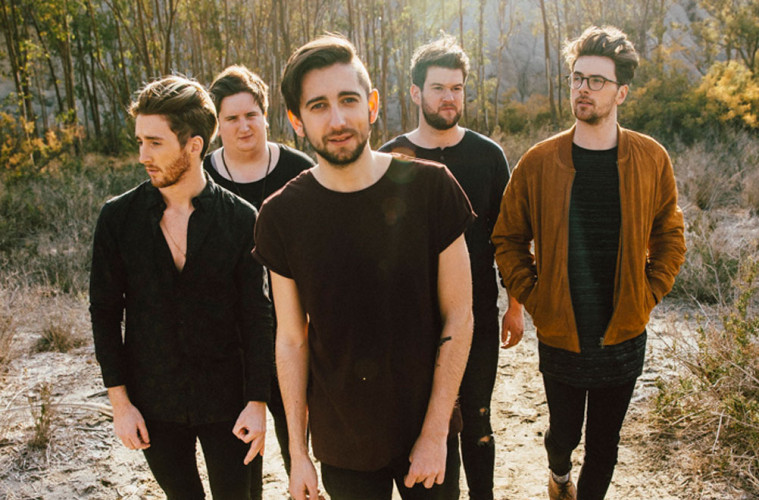 Eliza And The Bear Interview

It was a busy 2015 for Eliza and the Bear, with their EP ‘Make It On My Own’ being released in June and their tour which started In Manchester’s Club Academy on 1st October. We caught up with the group’s lead singer, James Kellegher to discuss how he feels about performing live again and the release of the band’s upcoming album.

Hi James! Thanks for talking to me today. ‘Eliza and the Bear’ is a very unique name! Where
does it come from?!

When we started, we had no real intentions of being like a proper functioning band, playing loads of live shows.
We just kind of sat down and said, ‘Listen, we’re bored of not writing music. Shall we just hang out, write a few songs, stick them on Facebook and just have fun with it?’ Obviously we needed a name and Paul, our drummer,
found a collection of poems by a woman called Eleanor Rees. It was called, ‘Eliza and the Bear.’ We just thought… that’s a kind of cool name. We emailed her and asked her if we could use it. She said yes and now everyone thinks I’m a girl!

Do you find it weird that people recognise you and know who you are now?

Yeah, I don’t think I’ll ever get used to it. Like, sometimes you meet people that are so excited to bump into you and kind of get all nervous and want to get a photo. You’re kind of thinking… Huh? I’m just like a normal bloke. I’ll never ever take that for granted, that’s an amazing part of being in a band.

Your EP ‘Make It On My Own’ was released in June. How do you begin the writing process for your songs? What gives you inspiration?

‘Make It On My Own’ actually came quite late. We were writing for an album, which we recorded at the end of last year. I think, ‘Make It On My Own’ was written pretty much a week before we left to go and record. We had a bit of time of and we were just like… ‘Why don’t we just see what we come up with?’ and for some reason, I think the lack of pressure meant we could muster something up really quickly. It came pretty much in two days and we were like, ‘Yep, this needs to go on the album.’ We sent it to the label and said, ‘We’ve just written this, can we go and record it next week?’ Inspiration for the song was one of those things where we felt this could be a point in our lives where a lot of things change for us. The thought process was that you can make one tiny difference in your life, that can make a huge difference down the line. Starting a band 3 years ago felt like something relatively insignificant at the time, but it has potentially changed our lives forever.

Do you all tend to agree on which tracks should go forward and be on the EP, or on the album? Is there a bit of conflict sometimes?

You always feel like there’s gonna be a conflict. When we do it, we write down our ideal track listing on our own, then we bring it into the studio and see whose matches up and what’s different on everyone else’s. We came in and everything was exactly the same. It was kind of like one of those weird things where everyone was on the same page at that moment – there were no disagreements!

Your next single is going to be ‘Lion’s Heart.’ Why did you guys choose this song as your next track?

We already released it as a b-side for ‘Upon The North’ last year or the year before that I believe and that actually was under the name ‘The Southern Wild.’ We wrote it before we really started playing live and when we started playing with live performances, our music changed. It became faster, it became a bit rockier and when we went to make the album, we recorded that version of it. When we sat down and listened to that song, we realised it had turned from a b-side into a single. We didn’t just want to leave it there and not do anything with it, so we thought it was worthy of another re-release in its new form and we’re really proud of it. We hope people that heard the old version like it and people that haven’t will latch on to it. We’re really excited to get it out.

Your EP has already done really well and has received brilliant ratings on iTunes, but do you worry before releasing new music?

I think you always do. When we wrote ‘Make It On My Own’ we were just like ‘Yes! This is a great song.’ You have so much faith in it, but obviously when you release it and no one’s heard it before, you’re always gonna have those nerves. There’s that half an hour period before it’s out and you’re just sitting by a computer, like ‘Oh my God, are people gonna like this? Is everyone gonna hate this?’ You start to doubt everything you’ve believed for the last couple of months. I think you’re always gonna be nervous no matter what you’re releasing. If you weren’t nervous you wouldn’t be proud of something. You can be so proud of what you’ve made, but you want people to enjoy it.

Aside from releasing your EP, you guys start your tour at Manchester Club Academy on 1st October! What’s your favourite UK venue to play at and why?

Favourite one so far for me was probably Brixton; because that’s the place I saw so many bands growing up. It was like the venue you’d see a band in during early 2000s/late 1990s, so playing there was like a big tick off the life bucket list. Koko going up on the headline tour is the one I’m most excited about. With it being a hometown show and our biggest headline show to date, it’s obviously gonna be an exciting night for us.

You have supported some great acts on their tours, including Twin Atlantic. Who has been your favourite to work with?

The Paramore Tour is still my favourite. They were such amazing people to tour with and I feel like we cut our teeth on that tour. We really learnt how to play live. We were chucked in at the deep end when we were signed
up to it. I think we gured out on the first show of that tour, that we played in front of more people that night than we had ever played in front of collectively before.

Do you guys get nervous performing live and do any of you suffer from stage fright?!

None of us get stage fright, but we all deal with nerves in a different way. Callie, our piano player, has this thing where he feels like he needs to hype everyone else up. He’ll be going round like ‘’Have a good show man!’’, but then he often gets really sick before he plays. I’ve seen him actually throw up a few times. I get really tired! Ten minutes before a show, it’s more than likely I’ll be asleep. I’ll be conserving energy. I think if you weren’t nervous you wouldn’t play a good show.

Do you always write songs together, or do you sometimes write them individually?

Sometimes Martin might write something at home, but we’re always in the studio together. The one thing about the way we write is it has to sound good live, so if we play it together in a room and it doesn’t sound right, it’s not
gonna work for us. We always focus on the live element of our songs, so playing them loud in a practice room makes us realise whether they work or not.

Well, you guys have clearly done really well for yourselves! What would your advice be for any aspiring musicians out there?

The one thing that I always say that’s worked for us and goes back to how we started as a band, is that we weren’t
writing to please anyone else but ourselves. The only thing we had in mind was whether we enjoyed it and if we thought it was good. There was no ‘This will be great live’ or ‘The label will love this.’ It was always music for ourselves and I think that’s paid off for us. We try and keep that ethos to this day. Anything we write, it’s like…
this is for us, not for anyone else. When you do release it people can really see that it’s music you enjoy yourself and that you’re having a great time. It’s just about enjoying yourself. It’s not about being too serious and making is like a day job. You’re in a band; you’re supposed to be having fun. Just enjoy yourselves.

Well thank you very much for talking to us James and best of luck with the tour!

Thank you for having me! Honestly, thank you very much.