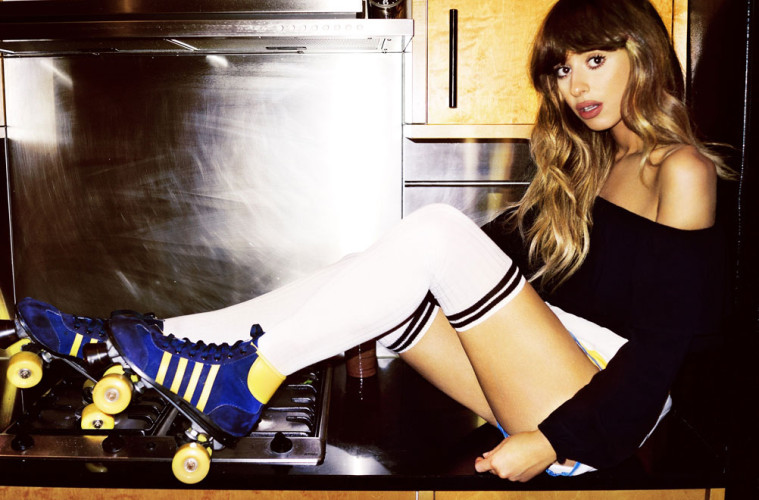 Also known as Louisa Rose Allen, we caught up with the 26 year old Grammy winner to chat about tips when getting a cheeky Nandos, her latest music and where her stage name came from, and here’s what she had to say…

Hi Foxes! How are you?

Good thank you! How are you?

Great thanks! It feels really weird calling you a plural of a fox when there is only one of you, do people often think that you’re a band?

They do… but I’ve kind of got used to it now. Hopefully one day, people will think of Foxes as just one person. But I doubt that will happen, I think I’ll just get the band thing for a long time. It is a bit weird but I quite like that it’s
a bit weird; there is nothing wrong with people thinking you’re more than one person haha!

We heard that the name came from when your mum had a dream about foxes howling and it reminded her of your music, is this true?

It is true, yeah! So basically, I wrote a really rubbish song when I was about thirteen called ‘Like Foxes Do’ and when I had to get a stage name, one of my friends said ‘why don’t you be called Foxes?’, so it started as a bit of a joke. Then a couple of days later, it stuck in my head and I was like ‘why won’t this name leave my brain?’ So then I called my mum and said ‘Look, Mum, I have got this idea, I know it sounds crazy but I might call myself Foxes?’ She came back and was like ‘oh my god, that’s so weird, I had this dream last night that all these foxes were
running up our street and making all these noises. Then I woke up thinking of your music!!’ We both thought it was a sign, so I went with it.

That is so weird! It’s strange how a thing like that happens isn’t it?

It is odd, yeah! Now, I always get fox-like things that happen to me. The other day I had a staring competition
with a fox for about a minute in my garden! It was on the day of the single release, so it was a nice little sign.

So what about if your mum dreamed about chickens? Would you go ahead and be called chickens or hens?!

I would, yeah! I’d be called chickens. I thought about being called penguins!

That would be pretty cool, it’s a bit like the Batman villain though?

Yeah, that’s not great, maybe koala. Koala could be fun? GIRAFFE? Giraffe is a great stage name, someone should take that if it’s not already taken. Oh wait, it’s a restaurant, we don’t want that.

Anyway, talking of chickens, what came first, the chicken or the egg?

We love the track ‘Body Talk’! But what we want to know is, what would your body say about your lifestyle if it could actually speak?

HEEEEEEEELP! And yeah, it would say, stop feeding me chicken… I don’t want any more
Nando’s please!

Mine would definitely say stop drinking and eating so much!

Mine would just say ‘stop eating’ in general, like ‘give me a break’!

The video for the track is great too. Did you have fun filming in a petrol station?

I loved  filming in a petrol station! It’s quite random, I’m doing some improv dancing with some backing dancers, and I keep going up to pay for my petrol. But then I’m trying to escape the petrol station and I can’t get out, haha!

The sound and visuals remind me of a 70’s style scene and it’s brilliant! Is that what inspired you in your music and fashion? Or is there something else?

It definitely is! I really love a lot of that kind of thing. It’s got like an 80’s style going on as well, and I was inspired by a lot of people like Cyndi Lauper, Kate Bush and that era I guess. ‘Body Talk’ relates back to the type of music
I was listening to at the time, but yeah, I’ve got massive 80’s hair in the video too!

With music you’ve obviously worked with some great names over the years and you’ve got a massive following, but who would you say was your best friend in show-business?

Ohh! That’s a difficult one! I don’t actually hang around with show-business people that much. I
tend to hang around with my friends I’ve known since I was growing up. I do have friends in the industry that
I love though; I highly, highly rate the Bastille boys! I went on tour with them last year and they’re good mates, so I really love those guys. Pharrell is lovely, and I really like Jameela Jamil; she always manages to crack me up at events that take themselves too seriously.

Awesome! So, what about Adam Richman on Sunday Brunch?

Yeah! That’s quite a good celeb mate! We got on so well that he changed seats to sit next to me and we were
like ‘sod this, we’ve got loads to talk about’ and we sat and chatted about food for the entirety of the show!
I got so many good tips and he’s promised that he is going to take me somewhere to eat; I guess it would
be something amazing. You can’t really turn that down can you?

No way, that’s cool! You worked with Zedd on Clarity and the track won a Grammy! That must have been crazy! How did you celebrate?

Well, I nearly missed it because I was across the road with Sam Smith and Disclosure drinking beer, because the Grammy’s didn’t have a bar! My manager called me and was like ‘What are you doing? They’re about to call your name!’ So we legged it back and I won it! I couldn’t believe it! To celebrate though, that night I went out and
got very drunk, and then I ended up singing ‘Bump N’ Grind’ by R. Kelly. It was awful! It was one of those
moments where you wake up and go ‘did I do that? Yeah… I did’.

Haha… What do you think you’d be doing if it wasn’t for music?

Perhaps something in fashion? I think I’d work in Greggs! I’d be a baker! I feel like it would be great because you can eat pastries and cake all day! I’d open my own bakery actually!

You could open it with Adam Richman, you’d definitely be on to a winner!

I’m going to make it my mission to do something food-related with him! I don’t know what though; he’s my new best mate!

Haha awesome idea! And finally, what piece of advice would you give to an aspiring musician today?

Everything in life is about building blocks and moving towards your goals. Nothing happens overnight, so it’s definitely about working at it and keeping going. Because in the end, if you want something you’ve got to believe it’ll come true. You can do something you love as a job if you work hard enough at it. Just not giving up is such an important thing to keep in mind. It might take a really long time to get to where you want to be, but you can do it if you put your mind to it. And also, be good to people ‘cause you never know who you’re meeting and it’s just nice to be nice, isn’t it? People can help you along the way because sometimes you’re up and sometimes you’re down.

Cool! Thanks for chatting to us and best of luck with your tour and new upcoming album!

Thanks very much, lovely to chat to you. Bye!