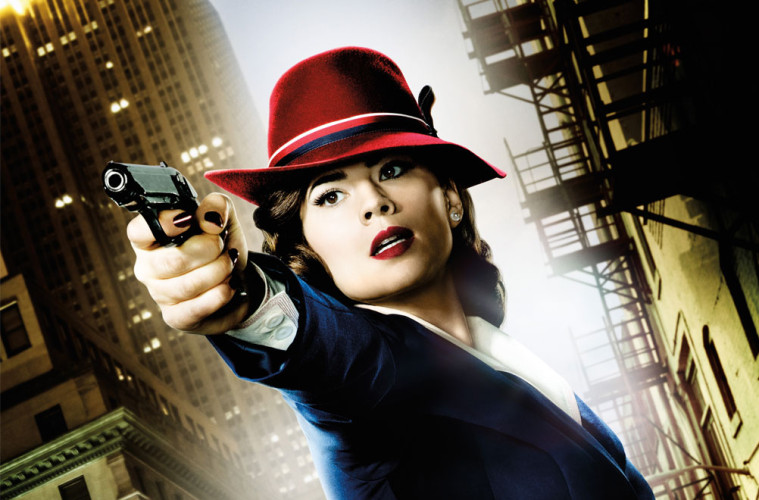 Set in 1946 season one of Agent Carter follows Agent Peggy Carter in her struggle to be treated with respect in her role as a woman.
Despite all of her work along side Captain America during the war, Peggy’s role within the SSR has been reduced to fetching the coffee and answering the phones.
Seeing as she is pressed firmly against the glass ceiling, Peggy leaps at the chance to help her old friend Howard Stark in clearimg his name of treason. Finally a mission with a purpose.

This is by far, I think one of the best TV shows around at the moment, but doesn’t seem to quite have achieved the recognition I think it deserves.
One thing which makes this show so brilliant is the fabulous Hayley Atwell in the title role, but this show is also fantastically empowering for women in a number of different ways.

Disrespectful Men Suck:
The majority of men in this show are shown to treat Peggy in a disgusting manner. Seeing as this is set in the 1940’s that type of behaviour is more than likely to have been a regular occurrence, yet a number of shows seem to avoid or ignore this issue. Agent Carter not only highlights this, but also looks down upon it.
The perfect example for this is when the foreman asks her “Woah, what’s your name darling?”, to which she simply replies “Agent”. This shows that she isn’t prepared to lower herself to the position which men see her in.

Peggy Don’t Need No Man:
Not only does Peggy have no love interest, but she refuses to allow anybody else to stand up for her and scolds those who do. She explains that “to gain respect” she needs to be able stand up for herself without the help of anybody else.
Similarly Peggy is at no point shown to be a typical “damsel in distress”. Instead she in fact saves a number of her male colleagues lives, including the incredibly sexist and big headed Thompson.
She is also able to match every man she encounters on not only an intellectual manner, but also physically and usually comes out on top.
Girl power!

Jarvis The House-Husband:
One of the most interesting things within this show is the switch in role reversals. Howard Stark’s butler, Jarvis, is shown to be incredibly useful and valuable to Peggy’s investigation, but he is also shown to be a docile and gentle house husband.
He manages to perfectly fit the role a woman would normally fill. He can cook in an old fashioned apron, he can sew and he has to answer to his other half.
He also priorities getting his “soufflé in” the oven over investigating missing inventions.
Well done Marvel on this gender swap!

Smashing The Glass:
The most important reason this show is so empowering to women is the fact that it not only acknowledges the glass celling, but it manages to smash it to thousands of pieces.
This is done through one simple line at the end of the season.
“I know my worth”.

If you haven’t already guessed, I love this show and cannot rave highly enough about it.
Season 2 is set to begin this week, so please do give this wonderful show a chance if you get the time to do so!