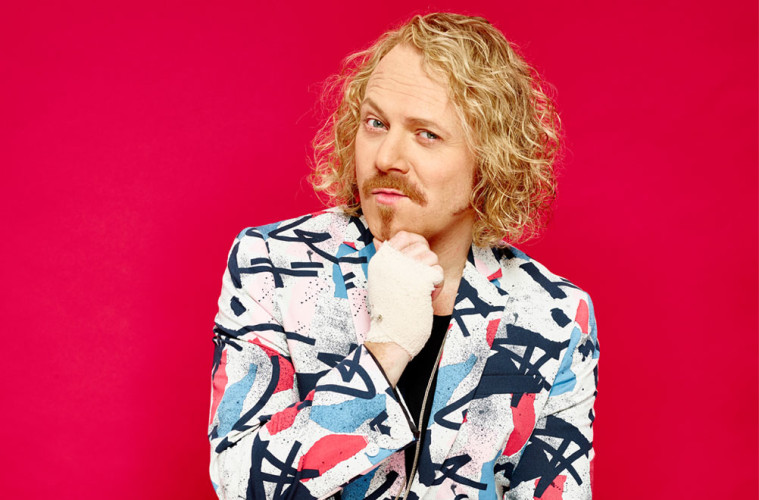 Once a brash bloke from Leeds, Keith Lemon has now set our nation on fire with his tickling television shows and oh-so-saucy slapstick. With Celebrity Juice in its 14th series and Through the Keyhole established as a prime time show, Keith took a minute out to chat to us about how he’d pull in Freshers’ week, his cocktail fantasies and a confession of his wettest dream yet.

Hello Keith! How are you getting on?

I’m not too bad! I’ve been better, but I’m not too bad! It was the wrap party for Through The Keyhole last
night, so I took advantage of the free booze and enjoyed working in telly like ‘Wow, we work in telly,
this is great, I’m livin’ t’ dream’. Then this mornin’ I thought s**t I work in telly, I’ve got to do interviews!

So you’re a bit hung-over then?

A bit, I mean, I’ve had worse hangovers. There has been no residue from my bum hole and I haven’t been sick.

Haha, lovely! Now, first of all, I’ve got to ask, if life gave Keith Lemon some lemons, what would you make?

Lemonade? Is that the right answer? I’d get some cocktail sticks to make a person and then stick a tash on
it and say ‘Look it’s a character of me’ haha… and then I’d go t’ pub haha! I tell you what I wouldn’t do – I wouldn’t cut it into slices and put it in me coke. I’ll never understand lemon in coke, I don’t get it at all!
I always just take it out. The other week I was drinking some coke and I was chewing on something that I
thought was ice but it was a pip! I just don’t understand it, it’s stupid!

So would you put them into a cocktail? Maybe you could create a new drink and name it Celebrity Juice!

I bet that exists already! There’s all sorts of things popping up I always see. I saw there’s a Thai restaurant
called ‘Bang Thaidy’ and I think there’s a hairdressers called ‘Bang Tidy Hairdressers’ an’ all. Funny what pops up innit?!

Haha, yeah! If you were to make a Celebrity Juice cocktail, what would you throw in it and why?

I don’t know anything about making cocktails but I’d probably throw Hooch in it  firstly… because I am
the face of Hooch. If I put anything else in it they’d probably say ‘You can only drink ‘ooch, tell everyone
you drink ‘ooch’. So, I’d put Hooch in it and some vodka. That would probably do it I reckon, it’s like a
vodka lemonade with extra kick! [Pause…] You got me seriously thinking about a cocktail then! I’d throw
in some umbrellas and a cherry on a stick too, just to make it look all Club Tropicana, ya know what I
mean?!

Sounds delicious but deadly! There’s a new series of Celeb Juice out in September! Can you give us a sneak peak into any new games and guests?

For Juice, I haven’t got a clue what’s gonna happen. We lm it on a Wednesday, it goes out on a Thursday, so two weeks before I’ll go into the office and we’ll have a run through the new games. Then I’ll say which games I like and which games I don’t like, and then new games will pop up every week and I’ll go ‘Is this a new one? Did we play this?’ The team are so good at coming up with games. With me birthday, I said slow down! Let’s play some old ones cos me and Gino are gonna get p*ssed! I didn’t want to start a new game cos I might not be able to explain it, I wanted to play an old one so I could explain it! With The Keyhole, we’ve got some great houses and done some wicked VTs. So we’ve upped the ante there and we’ve got some diverse homes and diverse people. The panel’s been great, we’ve got Jonathan Ross, Jimmy Carr, Jerry Springer… all sorts of really cool people, I’m really excited about it!

Sounds cool! Who would you say would be your ideal, dream team on Celeb Juice?

Holly, Kylie Minogue and Rita Ora, then Ferne, Gino and Mike Myers. The commissioner at ITV said ‘Can you try and get Mike Myers’… Oh yeah, I’ll just phone him up now! Pftt… Mike Myers! Mind you, I haven’t seen him in  films for ages but I love Austin Powers and I heard rumours of another one coming out. I asked Verne Troyer and he doesn’t know either. Fingers crossed they’ll be more Austin Powers but I’m looking forward to the Star Wars
film.

Yeah, that’ll be quality! It’s no doubt you have a way with the women, but out of Holly, Ferne and Kelly Brook, who would you snog, marry and avoid?

Avoid Ferne. I would snog Kelly and marry Holly. I would marry Holly because she is marriage material, but if I were to marry Kelly it’d be too much hard work. If you went out with her to a bar and left her sat at the table or whatever, they’d be some guy there wouldn’t there? Kelly Brook is too fit! Actually, f**k it, I’ll marry her, she’s too fit man, I’ll marry Kelly Brook! I’ve snogged Holly anyway, and I’ve sucked Ferne’s toes. Honestly, I don’t like
one more than the other anyway, I feel really lucky that I’m the envy of every man in England that I get to
work with the fittest girls on telly. I love both (Ferne and Holly) but I say I love them and I say they’re fit, but
I don’t look at ‘em like sexual objects because they’re my TV sisters. Kelly is just me wildest, wettest dream!

The ladies love your style too, so where abouts do you get inspiration for your clobber? We want some threads like yours!

I think my clobber is very European, it’s exotic. I take a lot of me style from Michael Hutchence, the singer of INXS. I’m a big INXS fan! I gave the INXS programmes that I collected from the gigs I’d been to back in the day when I was a kid, to my stylist and said ‘anything that Michael Hutchence is wearing, see if you can buy anything
like that!’ I became really good friends with someone on Twitter who noticed I started dressing a bit like Michael Hutchence and yeah, we shared an interest in INXS. Then I got talking to some INXS fans and they send me bits of INXS paraphernalia or memorabilia. Paraphernalia? Is that the same as memorabilia?

Well memorabilia then. People often buy me ‘Back to the Future’ caps as well, cos I’m a big fan of that. It’s nice when people know you are into summit and then they buy you it. It’s cool they think about you, I like it and it’s
even better when they make you summit. Knit me a doll of myself! I’ve got a knitted doll of myself which I’m
quite fond of. It’s weird.

Moving aside from your fashion, you’ve got your show ‘Through the Keyhole’ which we’ve talked about. So, what is the weirdest item you have found in a celebrity’s crib?

This series, the strangest thing I saw was a pig! It were just wonderin’ around like a dog. You hear about people having pigs but I’ve never met anyone who actually owns a pig; I think George Clooney has a pig!
Yeah, I read that George Clooney has a pig, but anyway, this person had a pig. I ended up in close proximity of the pig and it was squealing a bit, didn’t seem very happy! Then the wife of the homeowner came to rescue
me from the pig cos it were in a mood with me. It didn’t like me at all but it might have been because I was sat eating a bacon sandwich! Hahah!

What celeb do you think would have the best crib? Ed Milliband has got two kitchens apparently.

Two kitchens!?!? I’d like to see Simon Cowell’s gaff . It’s funny because you have a certain idea of what a person’s going to live in and often you’re wrong. It’s  either bigger or smaller, and I’ve never nailed it. We did
some houses in America and I saw a lovely house which was probably the best place we’ve been in. I thought
‘Yeah, I’d live here’, not that I’m saying I’d live in LA, I mean, I like going to LA on me holidays or for work, but I love London. It’s a fantastic place, we have a ball in London, there’s always something to do, it’s great.

I’ve got a few questions from Facebook here, Ross Lee from Norwich has asked would you like to go to his tattoo studio and get a free tattoo? If so, what tattoo would you get done?

No, I’d never have a tattoo. I like the look of them sometimes but I’d get bored and regret it.

Gail asked would you ever dye your tash?

There would be no point; dying facial hair is a bit weird. I have got a big ego and I do like myself but not enough to dye me tash, I’d feel like a d**k face!

It’s your trademark though isn’t it? Strawberry blonde?

I’ve come clean now and say I’ve got ginger hair, mate! I had blonde highlights, that’s why I always used to say strawberry blonde because I’d spend three f**king hours in the hairdressers bored s**tless having highlights done. I didn’t dye it that much in this series of Keyhole and I had some highlights done at the end of it, so you can see my hair getting gingerer and gingerer but I don’t care anymore about what colour my hair is, I don’t give a s**t anymore.

Lastly and most importantly, have you got any pulling tips for our Freshers’ students? I’m sure they’d love to hear some advice from an expert!

Do not mess about! If you fancy someone, go over to them, ask them out. If they say no, say ‘Fair do’s’ then walk back past them and say ‘Are you sure?’ If they say no, say ‘No worries’ and then go back a third time and go ‘I’m not gonna ask you again, this is t’ third time, I’m making a fool of me-self. I really like ya, I’ll show you a good time, I’ve got a Nando’s black card, I can get enough chicken for free and so you should go out with us’. I think be persistent but don’t be obsessive!

Great advice, if only I had a black card! Well thanks Keith! It’s been a real pleasure and we wish you the best of luck.

Cheers man! Have a good weekend! All t’ best! Taraa!