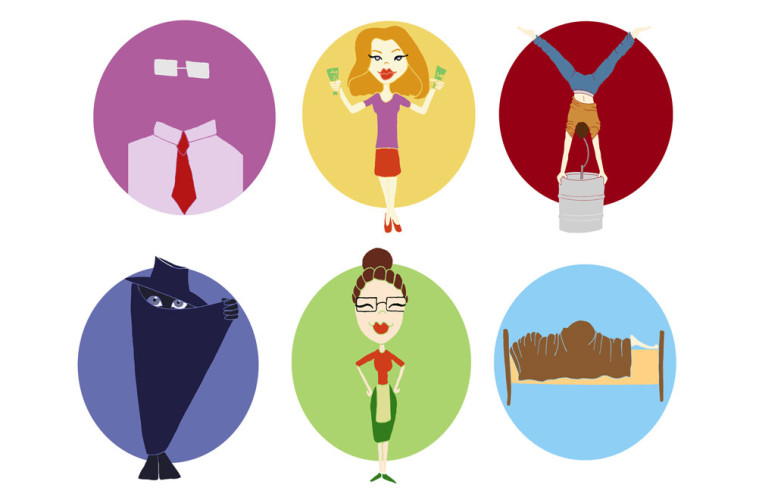 They fear missing out, are easily bored and are barely ever indoors. The Party Animal loves being the centre of
attention. They’re massive extroverts and tend to be rather impulsive, meaning what seems a marvellous idea at the time, doesn’t tend to seem quite so appealing in the morning!

They’re not strangers to the clubbing scene and routinely become best pals with the local bouncers – even occasionally becoming club promoters themselves. One thing’s for sure… there’s definitely never a dull
moment with a party animal around!

They have endless amounts of money, no cash worries and barely need their student loan. The Money Bags love to spend, simply because they can. Clothes, meals out or the latest iPad, those things you deem non-essential ‘extras’ are considered necessities to a shopaholic. Unlike you, they’re not jumping for the heavens when their loan  finally comes through because they’ve already got pots of money just sitting there… oh how lovely!

They never seem to be around, you’ve hardly spoken to them and it gets to the point where you question whether they’re even still at uni. The Disappearing Act is a true introvert. They’re quiet, reserved and would rather be on
their own. They are furiously independent and prefer minimal social interaction. They may not say much, but they’re usually incredibly observant and very good listeners, making them extremely loyal friends… if you give them the chance.

They always have their head in a book, belong to a million societies and have various responsibilities
around campus – annoyingly, they seem to have it all. The Studious Student is utter perfection. The library is their second home, and they’re also involved with the university’s Student Union because, well… how could
they not be? Somehow, they also manage to be well-liked by pretty much everyone. That’s right; they have the amazing social life too. We’re really pleased for you… genuinely.

They constantly burn their food, leave their washing up for days on end and just about make it to the shower once a week (if you’re lucky). The Super Slob finds everything too much effort. Their room’s a complete mess, essays are frequently completed the night before and missing lectures is not uncommon. They have the ability to sleep far longer than the average person and seem to be late for just about everything. They didn’t show up to your
latest gathering? Don’t be offended… everyone gets the same treatment.

They act as a surrogate parent, counsel you in your hour of need and often tell you what you don’t want to hear. The Agony Aunt solves all your problems. Is it more important to buy those jeans or have enough money for food this week? Obviously they choose the boring option every time, but begrudgingly you have to admit, you know they’re right. Can’t seem to solve that unwanted dilemma? Speak to an Agony Aunt… we guarantee you won’t regret it.

They always do their own thing; they don’t care what others think and they’re that person you just can’t seem
to work out. The Complete Mystery is the ultimate free spirit. There’s always one person that just doesn’t ‘ fit’ into
a stereotype. They’re unique, chilled and refuse to put themselves into one category. You admire them for being
their own person, but their mysterious nature has you wondering who they really are. The sooner you embrace their individuality, the sooner you can relax… and breathe!

Recognising any of these? Which stereotype are you? Let us know by tweeting us @TheSPG