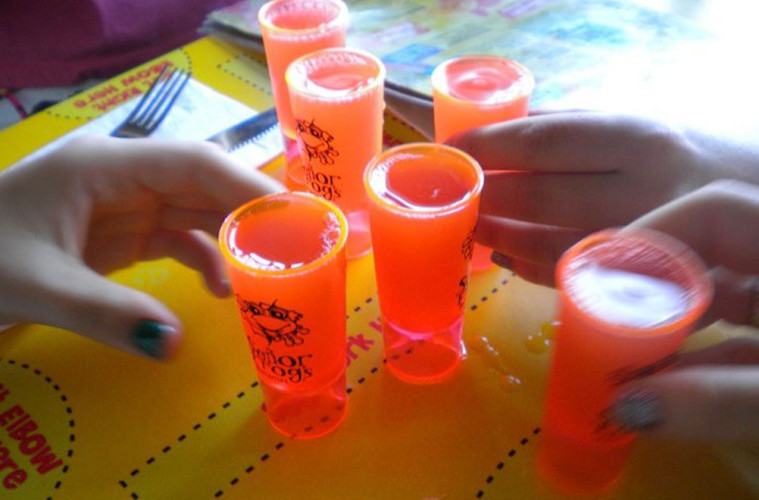 10 Hilarious Things That Happen At Every House Party

So you arrive at a house party. A friend of a friend opens the door and a friend introduces you to this other girl he invited. You all take off your shoes and jackets, grab your booze, and go into the living room at last. Then it begins.

All eyes are at you and it dawns on you that the one classmate who was supposed to show up has probably changed his mind, so you don’t know anyone. You begin to wonder, was this really a good idea? Now you have to walk around the room and tell everyone your name, and – the worst part of all – remember their names. Yeah, as if you were going to remember it! You’ll ask them at least 3 more times and in the meantime you’ll call Jim Jake, and Jake – Liam.

2. Becoming BFFs with this one random person and hanging out together the whole night

That’s the person you didn’t know before. Somehow you click and deem each other really awesome. And then you become inseparable. Well, at least for next around 5 hours. If you’re girls, it’s compulsory you go to the bathroom together! If you’re boys, perhaps not, but who knows? Anyway, it’s great fun. You confess all of your sins and all of your loves. Then your brain suggests that saying this one Extra Personal Thing was likely to have been a terrible mistake which could ruin your reputation. Luckily, 9 times out of 10 Party BFFs don’t pay attention.

3. Stealing the most random and useless object because at the time it seems hilarious

It’s when you wander around the house and suddenly come across this one item… like a super cool pen or an odd figurine of a dog. Things you have no idea where people get them from. Surely not in the shops you go to. And you can’t explain your craving for it, but it seems like a harmless deed. Then the next day you open your bag and WHAT? What the hell is that? Why did I take it?

4. The moment people get so drunk that non-smokers decide to smoke and the ‘I don’t like the taste of alcohol’ people down shots of vodka with the most hardcore drinkers

That’s when the party actually starts. Everyone’s mood switches to ‘You only live once!’ and ‘Oh, why not?’. No exceptions. Mistakes are made at this stage. However, at the time you’re not aware of them being mistakes.

5. When you hang out with the most wasted guy and he tells you very weird and personal stuff while you’re holding him so he doesn’t smack his head against the door frame

6. Getting the munchies and eating whatever you find in the kitchen

Hint: anything dipped in ketchup – a firm 10/10, I strongly recommend. It’s a great bonding session and once again you make a Party BFF (but it’s a different person this time). Anyone can join in. At a party, everyone can be a cook. Whatever comes out, even if it’s seemingly inedible or even completely dreadful, you’re gonna eat it and you’re gonna love it. Yes. It might also occur to you, bread with ketchup is a lovely combination and how did you never think of it before?

7. Sitting in the garden with a bunch of people and talking about the universe and death, and how we can’t possibly be the only living creatures out there

That blonde girl made a terrible first impression on you. It was just something about her face, perhaps she appeared a bit condescending. Well, it’s not important. What’s important is you frowned upon every word she said and you felt like one of the main characters from Mean Girls. Three hours into drinking, somehow you start talking with her and she’s nothing like you imagined, very nice and funny. But then an hour later, you feel the need to bring up what you thought of her before. She’s no longer nice and funny. Now she is exactly what you thought she was. Perhaps there was no need to mention something just because it came to your mind. But you never learn, next time you’ll go to this boy and tell him how you used to be in love with him, but no need to worry, you’re so over it now.

Dry mouth. Dizziness. Three hours of dreamless sleep, on the floor, using your shoes as a pillow and a doormat as a duvet. Everyone’s quiet, somebody’s taking a shower, two organised girls make ten cups of tea. And a few people go out for a smoke. They are also very quiet. It’s usually windy and early in the morning, no matter what season it is. Somebody goes home, someone else has to wait another 30 minutes for a bus. Everything’s going back to normal.