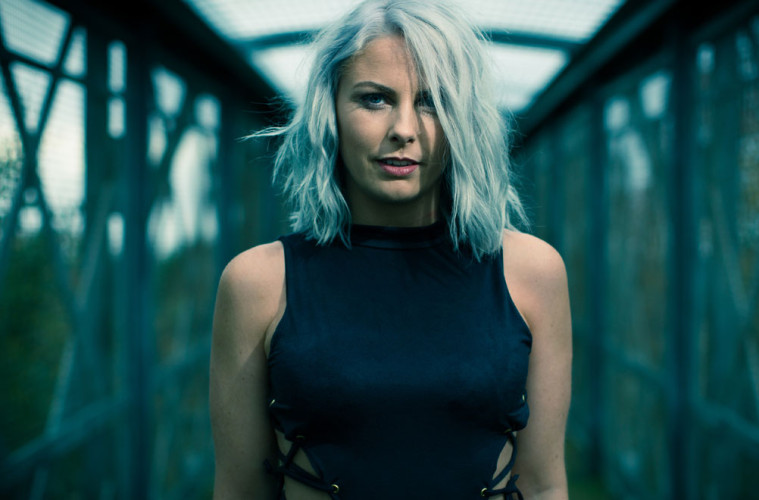 You may know Charlie Hedges best for waking our sleepy heads up on Kiss FM’s breakfast show, and on the back of that she is an avid DJ who has performed all over the globe. From her booming sets in Ibiza, to her monthly podcast, we chatted to her about music and her UK tour, and here’s what was said…

Hi, Charlie! Could you tell us who you are and why those of us who don’t know you should go and check you out?
Hey guys, I’m Charlie Hedges – a 5ft music-devoted girl who loves nothing more than to come to a club and go crazy playing house music!

So, you’re about to embark on your UK tour- are you excited?
Excited is an understatement! I’m so so excited to be going on my #CharlieSays tour – I’ll be hitting venues all over the UK doing what I love most: playing house music and meeting even more people who are kind enough to come to the gigs, it’s going to be so much fun

What’s your set going to be like? Any secrets you’re willing to share?
My set will be energetic and packed full of house music – so if house is your thing, then you should definitely check out the date near you! And we have a few extra surprises on the night too, all I will say is mind your heads! 😉

Are there any particular venues you’re most excited to visit?
Honestly, and it sounds like I’m talking rubbish but all of them!Every single venue I’m going to be playing at holds an exciting memory from previous gigs and it just feels so exciting to be back at all these places and at some new ones too.

You’re currently DJing alongside presenting radio station Kiss FM. What made you decide to give DJing a go?
I’ve always wanted to be a club DJ from day one and I knew working in radio would give me an amazing platform and chance to get into the world of DJing and making music. I love talking (obviously!) and the radio side to my life is so much fun, I love them both!

How did you work your way up the ladder to land in the highly successful position you’re in now?
So, aged 13 I applied to be a freelance journalist/assistant for a local magazine called Naked Tongue in Essex, they gave me the job just for the cheek of asking as it was a magazine aimed at over 25’s. In my school lunch breaks I’d then make lists of celebrities I’d ideally like to interview and then I’d track down their PA’s online. Before I knew it I was interviewing some great people who were kind enough to give a 13-year-old a chance, my interviews were getting published in the magazine and one of the guest interviews was with a Kiss DJ at the time. How that came about is a great story too but I’ll keep it short, basically my Dad is a London black cab driver and picked one of the presenters up in his cab, Dad being Dad he talked them into letting me interview them and the rest leads on from there!

From that day onwards I kept in touch with the breakfast show presenters at Kiss and used to come up for work experience every few months. Timing-wise, it’s crazy how things happened as I finished college and a week before I started uni to study for a BA in Journalism at Harlow College I got a call from the presenters on the breakfast show at the time asking if I wanted a job as a runner/tea maker. I took the job – I used to get into Kiss at 4:00am, work on the breakfast show and watch and learn everything I could behind the scenes until the show finished at 9am,then I would drive to uni until 6/7pm and did this for 3 years until I graduated with my BA in Journalism. Like I mentioned, I’d always wanted to be a DJ and radio presenter but knew it would always be good to have a backup plan but in the same field, hence why I studied for the journalism degree. I loved to write too, still do today – I’ve still got a pen to paper daily diary haha!

After my degree I was offered a full time job at Kiss and in the background I taught myself to DJ. I’d practice at Kiss whenever a studio was free, using YouTube and Googling DJ tutorials to pick up on the basics and then I practiced every single day until the time came probably 6 months to a year later when I was ready to give a club a go. I can remember my first gig to this day, it was in a small bar in Bexleyheath Kent. Before I had a management team I’d get myself club bookings and gigs all over London and the outskirts, celebrity parties too by contacting promoters direct – to be honest, I had no real organisation going on so I was moving forward but not in a structured way; I had worked with a few management teams until people were recognising me as a DJ and not just the girl that presents the Kiss breakfast show.

Since starting with my current management team (Fresh Artistes) I am now organised, I have clear goals and I’m moving towards these goals at an incredible pace.I’ve got some amazing projects already on the go and there’s a whole heap of new ones on the way too; things are really coming together and for the first time ever I know I’m with the right people who are working with me because they 100% believe in me.You guys wouldn’t believe how much that means to me, I now have gigs all over the UK and around the world coming up over the next year, and this is where I am right now!

You’ve DJ’d in some major festivals, including V, Wireless, and the Isle of White Festival. What’s been your personal favourite?
I have honestly loved them all, it’s very hard as a DJ to pick your favourite as every gig comes with new and exciting memories and lessons too.But I have to say I did love playing Isle Of Wight Festival last year, I played in the Big Top Tent just before Paul Oakenfold and the tent was heaving, there was a heavy metal band on before me and so going from this to house music was a big change up, I’ve never been so proud seeing a tent the size of that fill up within 10 mins of me playing, I’ll remember that set forever.

Is it tough being a female DJ in a profession largely dominated by males?
I think it’s tough in any profession to be honest whether dominated mostly by males or not. Everybody in every job, in every office/workplace faces challenges in life, that’s what life is all about: being set challenges and having to overcome them. I’m not saying it’s been easy but then what fun would that have been if it was?
Tell us a secret about yourself.
I have a blanket that I had from the day I was born…I still have it haha

You’ve worked with a whole score of big names over the years. Who’s been your favourite artist to work alongside in your career so far?
I really enjoyed playing for Steve Aoki last summer at his night in Pacha Ibiza; his nights are always so much fun and it was nice being able to bring a deeper house set of mine to the table for his nights too

That said, if you could pick anybody in the world to work with in the future, who would it be?
Steve, and I’d get him to make a deep house track with me. Steve’s known for his EDM but I know he likes the deeper sound too… hmmm I might challenge him to this, I’ll let you know what he says!

What are your plans as a DJ this year, once the tour’s finished?
Once the tour is finished I’ll be back out there playing in more clubs and spending more time in the studio making some more tracks – I’ve just had a track signed to the amazing Armada Deep family which will be coming out very soon. I’ll also be focusing on my monthly Skiddle podcast which you can find on iTunes or Mixcloud under ‘Weekends Matter’ – there’s lots of exciting things to come with Skiddle, I can’t wait

Thanks for your time guys, get yourselves down to one of my dates x

Be sure to get tickets for one of Charlies dates below! You don’t want to be missing out! 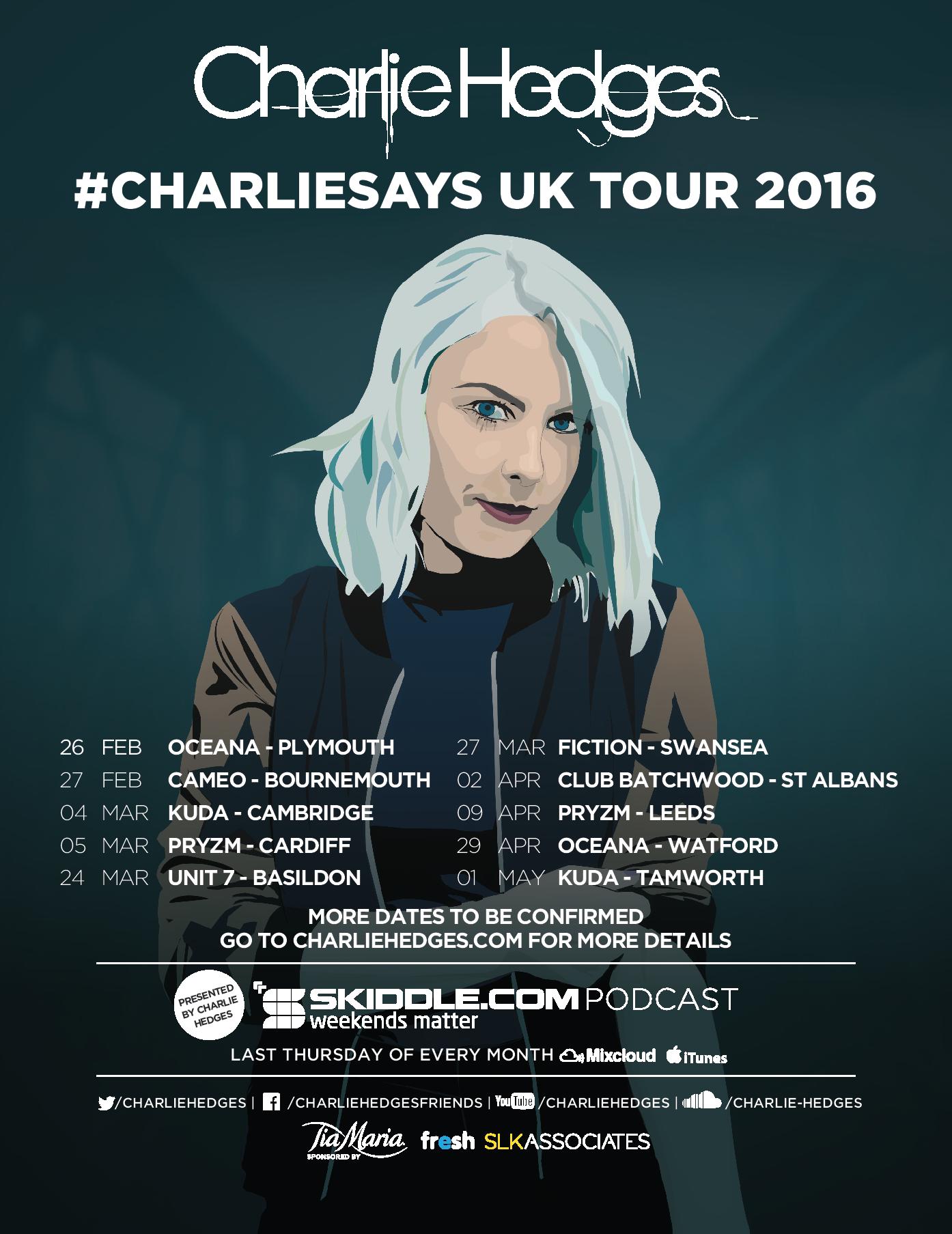