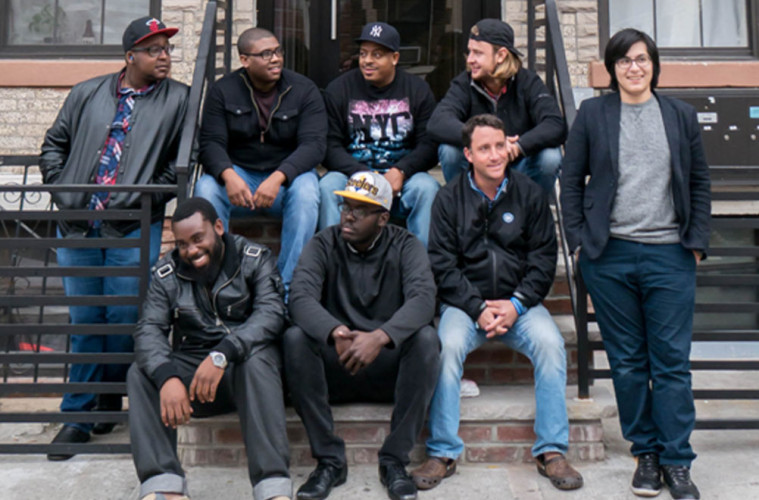 Ethan Parker band are sending vibrations throughout Florida right now with their new and unique sound. People cannot get enough of it! The band have produced four albums to date, have toured around the US and are now preparing for their upcoming Spring tour.

What was the main influence for the new album ‘To the sea’?

My two favourite places are the Mountains and the Ocean. And the idea on this last album was to go as a band and submerge ourselves in those two environments and let it pull out the music within us. We released From the Mountains in 2014 and then To The Sea in 2015. We recorded to the sea in a house on the water that a friend allowed us to stay in for a week in 2014 and it was so cool to be at such a beautiful tropical place and let it influence our music.

How did you all meet?
I moved to West Palm Beach, FL to go to study music at Palm Beach Atlantic University when I was 19. I met Jeanmarc (percussionist/vocals) the first week of school and we started playing music for fun as much as possible. He introduced me to Pierre (bass/keys) who had just built a home studio and I went over to his house to just jam. After that jam session we recorded Rhythm In My Chest in one night which is on the first album, Be Still. From there I met Pablo (Guitar), Hantz (Bass), Amos (Keys), and Muff (Drums) and we’ve become a family since.

What inspired the song: ‘more than this world’?
I believe a lot of things in life can begin to take higher priority than they should. It could be our jobs, or maybe the pursuit of fame, money, or possessions. And eventually these things become what we live for and consume us and distract us from what matters most. The inspiration behind this song is all about keeping what I love and live for always top priority in my life.

Why did you decide to partner with project Primavera?
Since the beginning it has always felt pretty shallow to pursue a career as a Musician. I have to constantly promote myself and there are so many other people make music and doing the same thing. And at the end of the day I don’t believe this world needs more noise. It needs hope. And we desire our music to be that for people. As well as on our journey we started an organization, Project Primavera, which takes the platforms of musicians and uses them to be an advocate for the huge need that orphans and at-risk you have for mentorship around the world. These kids feel rejected and need someone to point them in the right way. Our partnership is the first with Project Primavera but our goal is to have 5 Primavera Ambassadors by the end of the year that can carry the torch for our mission during all of their concerts.

What is your favourite part of the partnership with Primavera?
I love the motivation it gives us as a band. We want to grow because the more growth we have the bigger our platform becomes. And the more our platform grows, the more kids can be impacted through our voice. So far we’ve created 210 mentors through our live shows. It’s only been a year and we are already hearing so many cool stories through each child’s home or Big Brothers Big Sisters we partner with in each city.

You’ve recently decided to recruit at-risk youth mentors to get involved with your music, what inspired you to do this?
There are a lot of problems and issues in the world. Government corruption, greed, poverty, drug abuse and even human abuse. I asked myself how in the world I could ever change those things. And I believe the answer is through mentorship. There are many organizations that focus on helping the homeless, assisting individuals with drug addictions, or juvenile detention centres once they get caught up in crime. And as important as these organizations are, they only focus on peoples’ lives after they become victims to these ways. Our focus is to impact the lives of kids prior to succumbing to these lifestyles. So we take our voice and invite people to be a part of something that will change their life as well as a kids life. People have no idea how much it will benefit them when they start mentoring a kid and how rewarding it is.

What are you most looking forward to about the upcoming Primavera spring tour?
There is nothing like being on the road, meeting new people, seeing a new city, sharing our music, and putting on music workshops for kids. We can’t wait to get on the road this spring and share our songs with people across the US. We have so much fun and come alive when on tour!

What is your funniest memory of touring as a band?
I feel like we laugh non-stop on the road. It could be from the lack of sleep. But we’ve had a lot of great moments. But funniest moment had to be when we were on tour in Nantucket. Somehow we ended up having a Roman candle fight after a concert with the band and some fans from the show. I can’t really describe how hilarious it is to shoot flaming balls at people and try and dodge them yourself but it is. It was a memory we will never forget.

How do your own religious beliefs influence your work?
I’m not a super “religious” person but have been really impacted through having faith and a relationship with Jesus. It’s a pretty unpopular thing to believe in or talk about but if I’m being honest it’s really influenced me. I’m not trying to convert people. Just love people and use what I love to do to make an impact and help people. It’s influenced everything and put me on one amazing journey.

At first glance Ethan Parker Band has a refreshing sound but the work they do beyond their gigs is truly inspirational.  We hope you come across the pond to see us in the UK soon.