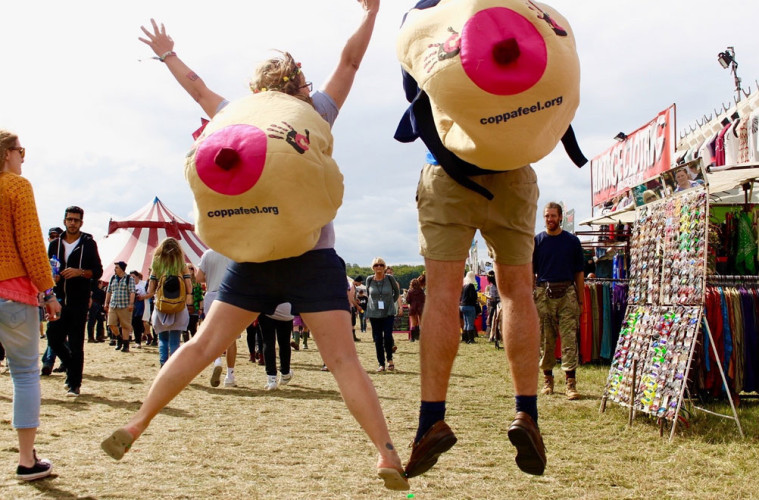 The revolution that is CoppaFeel! has been taking the UK by storm, and all thanks to a lovely lady called Kris Hallenga and her twin sister who managed to start up this foundation to help young people recognise the early signs of breast cancer.

Starting the charity only two months after diagnosis, Hallenga has become a sensation in promoting awareness of breast cancer amongst young men and women. Being diagnosed at the young age of 23, it was evident that cancer is not for over 40’s, as she tries to make clear on her blog posts and website dedicated to Coppafeel! Now in her 30’s, Kris has managed to build up the popularity of the charity through universities and fantastic charity events such as running marathons and appearing on national TV.

After coming on national TV such as Russell Howard, as well as starring in a BBC One adaptation of the book by cancer blogger Lisa Lynch in The C Word. Her campaign has also started gathering pace through celebrity recognition from Fearne Cotton, Lorraine Kelly and Danni Minogue, and Radio presenters Greg James and Dermot O’Leary running the Bath Half Marathon in 2013 wearing inflatable boobs in support of Coppafeel! Even getting into a Boobball (reinvented dodge ball) game with players such as Tom Fletcher. And early on in the campaign In September 2012, Mel B posed topless in a Coppafeel! advert in Cosmopolitan magazine, ahead of Breast Cancer Awareness day.  The advert’s risqué nature received mass-media coverage further promoting CoppaFeel!

Through CoppaFeel! they’ve extracted a team to spread the word through universities by going to Freshers Fairs and promoting themselves through student media, such as the student papers and radio. Uni Boob Team is one of their fantastic schemes to get people feeling their boobs and checking them regularly. Even asking people to sign up to their text scheme to get a routinely reminder, by text, to check and feel your boobs. Recently with the likes of Greg James becoming the face of the 2015 Uni Boob Team campaign creating even more buzz around the charity and it’s cause.

This awe inspiring woman has deserved all the recognition for all her hard work with the charity and raising awareness for a cause that has really inspired many and to actually feel their boobs.

After seeing her on Russell Howard’s Good News about 3 months ago, it created a sense of reality to hit in the face that someone in the world is facing an issue that we all just take for granted. Enjoying my 20’s I expected to be problem free when in a university bubble, but watching such stories play out hits hard when you think about real life issues that affect peoples lives.

If you’d like to find out more about CoppaFeel! Feel free to visit: https://coppafeel.org/