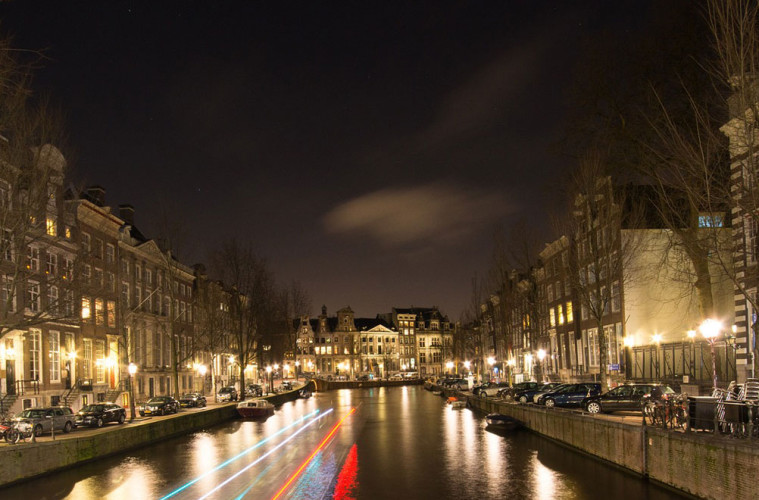 A Short Stay In Amsterdam

After an exhausting 4 days in France it was time to move onto our next two cities. Travelling to Amsterdam from Paris was a trek that required a stop at Antwerp to break up the journey. Taking the overnight train was a lot more expensive than the hostel that we had booked for just one night, however here was our mistake as we realised that the hostel that we had booked was one of the shabbiest kinds of hostel that is expected when you think of hostels. Cramped rooms, dirty bathrooms and people coming in at 4am covered in food. Luckily it was just one night in Antwerp, which meant that we could happily leave in the early morning knowing we were going to better places the next day.

After a less than stressful train journey to Amsterdam, we had arrived in the city with many forbidden treasures. Clearly everyone knows the real reasons behind students wanting to head to the Capital. However, in my experience without visiting the red light district, Amsterdam was one of my favourite cities that I have visited. It is definitely a visit for anyone who enjoys reading by the calm canals, visiting cultured museums or a pleasurable bike ride through the city.

Once we had dumped our backpacks at our Hostel Hans Brinker, we headed out and the first thing noticed was the copious amounts of sex shops available, as well as the rent a bike shops around every corner. It was clear from the on sight that bike rides were the one to try (even though I unfortunately didn’t get a chance). Our first official day in Amsterdam was spent visiting many of the fantastic sights that Amsterdam has to offer, for example a canal ride was a must. If you head to Amsterdam than a canal ride is definitely worth the time and money. The history and culture behind the architecture of Amsterdam is awe-inspiring. Once you’ve seen the sights on the canal it is inevitable that you will notice each aspect of the tour on your walks around the city. As we finished the canal tour we headed towards a random canal for a break to relax and enjoy the sights of cyclists and tourists travelling around the city, as well as heading to Amsterdam’s Hard Rock café where we ad to purchase a souvenir. Before the end of our first day in Amsterdam we headed to the famous cheese museum. A small and quaint little shop but probably one of the most interesting museum I have visited in a while. With the various amounts tasters it was easy to become engrossed in eating rather than purchasing cheese. But it is easy to want to spend your entire budget on the varieties available, but somehow I managed to restrict myself to one rather large slice of pesto cheese.

Our second day in Amsterdam was much more packed full of activities with visiting the large sign Amsterdam sign, as well as visiting the Anne Frank House, definitely a top tip is to get there very early to avoid the long queues. We arrived around mid morning but the earlier the better, as the queues tended to go down the street, although there were free hand outs of guidebooks, which helped with the wait and was helpful in understanding the background if you didn’t already know. The House itself is a fantastic experience, the reality hits hard when walking in the same footsteps that were experienced by Anne Frank and her family. Feeling a bit glum after that experience, we headed to the wind-mills that the Netherlands is famous for. Only a short 10-minute train journey to Zaanse Schans was worth experiencing the out of town parts of Amsterdam with. The short walk form the train station to the windmills gave us an insight into the suburban houses. It felt like we’d gone back in time with the features of the houses had an early 20th century feel to them. The calm and serene acres of ground filled with working mills is one to experience if you want to get away from the business of the city centre and experience the tranquillity of wind farms such as these. Lastly, to end our journey in Amsterdam we headed to a pancake house that was recommended by our fantastic tour guide that was Lonely Planets guide to Europe on a budget. Also another fantastic visit for all the food readers out there with several varieties of pancake from sweet to savoury and comes with a complimentary pair of small clogs key chain.

Overall Amsterdam is one of the most cultured and beautiful cities I believe to exist in Europe with the tranquil canal rides to just having a quiet read beside one of the canals was by far one of my favourite must do things in Amsterdam, as well as touring Anne Franks house and devouring a whole pancake at Pancake Amsterdam.