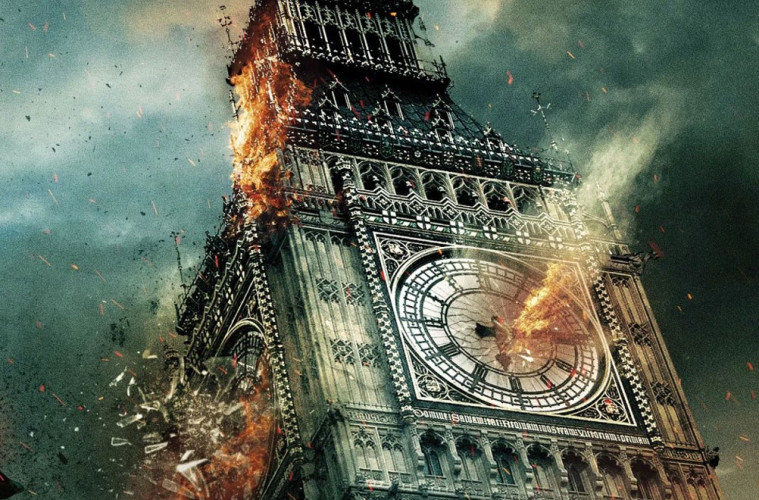 The President needs saving. Again. Back in 2013, Olympus Has Fallen saw Gerard Butler’s Secret Service Agent Banning single-handedly fight off a bunch of terrorists who stormed the White House with the intention of killing the leader of the free world, played by Aaron Eckhart. This time, the action moves to the UK when the President attends the British Prime Minister’s funeral. Of course, things go spectacularly wrong and the capital – and the world’s leaders – come under attack from Islamist terrorists.

Directed by Babak Najafi, London Has Fallen bears all the hallmarks of its prequel – defined, perhaps, by Gerard Butler’s particular style of heroic, brash and unapologetic neck-snapping. Opposite Eckhart as the equally-buff President, Butler gnarls his way through some pretty painful dialogue: “why don’t you pack up your shit and head back to Fuckheadistan”, he diplomatically asks a terrorist.

The initial assault on the President takes place in central London, and in the first half an hour or so, most of the city’s landmarks are blown up, Heads of State are unceremoniously despatched by fake police (and even Buckingham Palace guards) and Gerard realises that it’s up to him alone to save POTUS. Cue a lot of running around, swearing, and a brief teaming-up with Charlotte Riley – MI6’s finest (and the film’s token strong female character).

Helicopters crash and armoured cars are chased through the chaotic streets, all filmed with frenetic energy (even if you’ve seen it all before). The film’s cinematography excels only in the final assault to rescue the President, using well-oiled tracking shots to immerse the audience in the firefight. Underneath all the explosions and bullets, however, there’s little – if any – substance to the film, which falls back on Islamophobia and general laziness in its plot construction.

Morgan Freeman returns in this sequel as the Vice President and spends much of the film looking in horror at computer screens, muttering “Oh my God” in only the way he can. Back at home, Agent Banning is soon to become a father, the usual Hollywood stuff to raise the stakes, and a device which gives the President and Banning something deep to discuss in the film’s down time.

London Has Fallen feels like a live-action video game, and at points, is rather unpleasant. Even Gerard Butler’s enthusiasm and warm screen-presence can do little to redress its thematic problems, driven by a worryingly-simplistic world view. Genre cliches run deep, and whilst I’ll be the first to say we all occasionally need unthinking action films, it has all got a bit ridiculous.