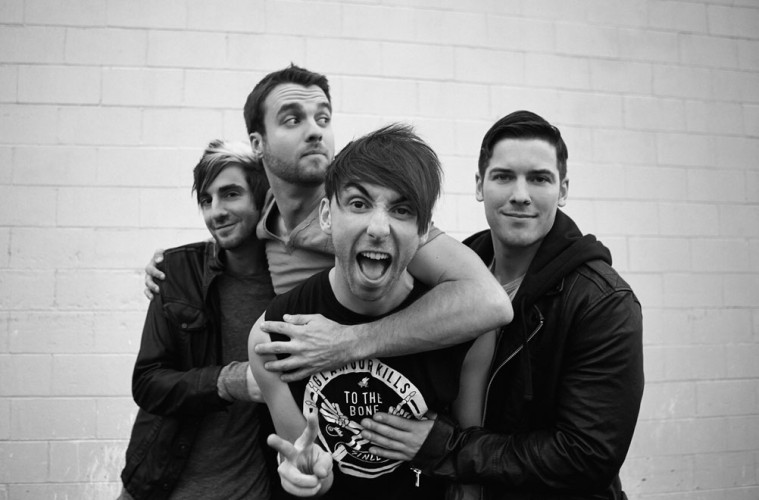 Dropping out of college to pursue a career in the music industry means American pop-punk band All Time Low may not seem like the most sensible guys to ask for advice, but their hard work is paying off. With the success of their most recent album Future Hearts and headlining their first ever solo UK arena tour, we caught up with Alex Gaskarth and Jack Barakat, asking them about their song writing process, any advice they may have for new bands and their favourite city to play in.

Your fifth studio album Don’t Panic recently reached silver in the UK, how does that feel?
Jack: It’s just hard to sell records these days so even the smallest thing is a big deal for us.
Alex: It’s huge, what with streaming. Any time we hit a mark like that it’s big.

Do you have a favourite country or city to play in?
Alex: London. London actually is amazing.
Jack: I think London’s the biggest place we can play in the world.
Alex: South America and places like that too are pretty insane.

There is definitely a stigma against acts like 5 Seconds Of Summer in the sense that people see them as more pop than pop punk, mainly because they are known for having a younger audience. Do you think this negative view will lessen over time or will the prejudice always be there?
Alex: I think trends change. A lot of that has to do with how people look at music in general. I remember being a kid and if you listened to pop-punk or punk, you weren’t allowed to listen to anything else. You listened to anything else and you were a poser. I remember that. I remember being called a poser because I liked punk and I liked Backstreet Boys and I liked Bob Marley and I liked Metallica and so people were like ‘What are you bro? are you punk or are you metal, man?’ I don’t know, who cares? So I think one of the cool things about where we’re at now in the world of music is a lot of those barriers have gone away and you find more and more now that a lot of people that are fans of All Time Low are fans of I don’t know, f**king-
Jack: Bruno Mars.
Alex: Bruno Mars, Selena Gomez. Like they’re going to all their shows.
Jack: But then also going to see Bring Me The Horizon.
Alex: It’s great that we can all exist on a one level playing field.

Do bigger shows make you more nervous?
Alex: I still get nervous because there’s a lot more going on. Usually on the first day of tour you’re worrying about playing the songs right and sounding right and things like that. But on top of that you also think like ‘Oh, this is going to shoot fire in a minute’ and you have to be not standing over it. There’s just a lot to think about.

As a band you all spend a huge amount of time on tour together, have you ever really bugged each other or do you mostly get along?
Jack: Yes.
Alex: Not like in a bad way.
Jack: In an irritating way. Like f**k you mother f**kers.
Alex: It’s like the same way you argue with your siblings. We’re all so close at this point that we bicker over like who put the candle out? Or who left the window open? Or some sh*t like that.

Do you have any advice for bands that are just starting out?
Alex: Work hard. In this day in age, because of the internet and because of the ability that you have to network yourself and promote yourself through YouTube, Twitter, Facebook and all that, there’s a lot of competition but there’s also a lot of opportunity. You just gotta go hard and not half-ass it, and be nice and make friends and make connections.

When writing songs, how do you normally start?
Alex: A lot of the time I’ll either write lyrics with no song purpose in mind and then apply it to music later but I think a song writing melody is really important. So a lot of the time I’ll write music with a melody and then fit words to it later.

Do you have to be in a particular place to write a song? Like a certain room?
Alex: No. We kind of write anywhere. One thing it’s a little hard to write on tour for us. There’s a lot of distractions and we have a lot of other stuff going on when we’re on tour, so usually being off tour and having a little bit of time to get creative and go to a studio.

Do you think your song writing process has changed over time, from your earlier music to your new releases?
Alex: Yes and no. In the beginning we were just sort of playing in a basement together and making sh*t up as we went along and it was very raw and the first thing we wrote would stick.
Jack: There was no going back and checking. There was no quality control.
Alex: It’s a little more thought out now. There’s a lot more steps to the process and figuring out if what we’re doing is actually right.
Jack: Or good.

Future Hearts is available for download on iTunes and if you missed them on their UK tour, you can catch All Time Low at Download festival later this year.