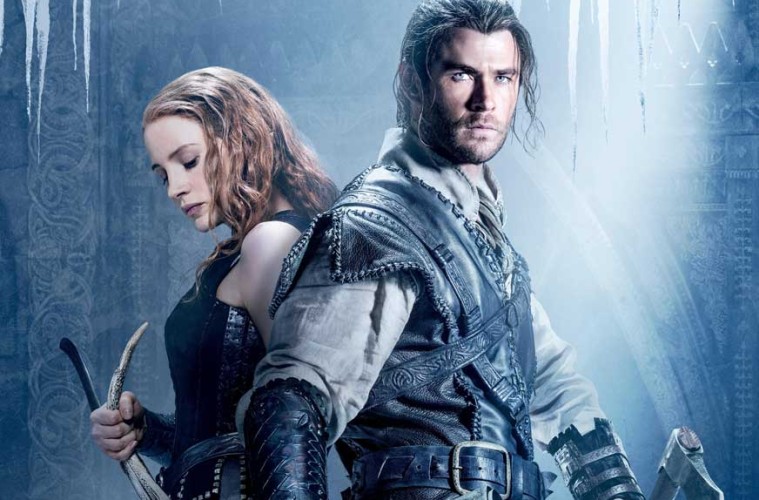 You can’t accuse The Huntsman: Winter’s War of not looking great. Part prequel, part sequel to 2012’s Snow White and the Huntsman, this film not only oozes with visual splendour, inventive production design and bold digital effects, but its star cast shines almost as much as the magical mirror on the wall. Chris Hemsworth and Charlize Theron reprise their fairytale roles, joined this time by Jessica Chastain and Emily Blunt in what the trailers sold as a tale of sisterly rivalry and dark fantasy. Shame, then, that such a stellar cast is rather wasted in a film which lurches around all over the place, searching for meaningful themes and emotion which are lost in a screenplay with little originality and even less spark.

In many ways, it should be little surprise that The Huntsman is so visually-arresting. Director Cedric Nicolas-Troyan acted as the visual effects supervisor for the first film, and he maintains the rich and compelling imagery, centred on the two evil queens – Ravenna (Theron) and her younger sister Freya (Blunt). After suffering a heartbreaking loss, Queen Freya leaves her sister’s side to conquer her own ice kingdom, kidnapping hundreds of children to raise an army of huntsman. From this emerges the back-story of Eric, the Huntsman (Hemsworth) and his wife Sara (Chastain) whose forbidden love angers Freya, who is determined to rid her kingdom of the emotion.

All this happens during – and far away from – the events of Snow White. It is a plot device which explains the absence of Kristen Stewart (a result of, if you believe the rumours, the studio’s disapproval of her relationship with director Rupert Sanders) and which comes full-circle when Freya summons the soul of her sister from the magical mirror.

The central problem with all of this is that it feels very forced and is undermined by a script which seems to have been written by a committee of execs with their eyes fixed firmly on the bank. Having assembled a really great cast, the rather stilted dialogue and bemusing gear-changes of tone let down the actors who, it must be said, really do give it their best shot. Hemsworth’s easy screen charm carries him through the film and Chastain is as watchable as ever in role which gives Hemsworth a run for his money in the fighting sequences. Both, however, have strange accents which seem to flick between Irish and Scottish: a sort of “Och-aye-top-o’-the-mornin’-to-ye”. That said, their relationship is ten times more convincing than the chemistry between Hemsworth and Stewart in the first film, which would have failed even the easiest of GCSE science exams.

But it is Emily Blunt who does the most to dig below the predictable screenplay, attempting to unearth a tortured and sad character below all of the evilness which may have younger audience members asking their mum “why is Elsa being so nasty?!”. Blunt – resplendent in her flowing costumes and ice-white hair – flings ice sheets left, right and centre, and she really holds her own opposite Theron’s evil cackles.

Rather bizarrely, Rob Brydon and Sheridan Smith make appearances as dwarves – alongside Nick Frost and Alexandra Roach – but, again, their talents are underused. The dark tone in the opening half hour is soon dropped once Brydon et al join up with Hemsworth, and the band embark on a quest to stop Freya from capturing the magic mirror which would bring back golden-encrusted Theron from her Dior adverts. During many of these sequences, the script takes a distinct comic turn with much foul-mouthed banter between the dwarves which is sure to raise one or two eyebrows. Some even more perplexing sexual innuendo makes the film’s tone further confused – something which gives proceedings a chaotic, messy feeling.

Most of the entertainment in The Hunstman comes from its action and fight scenes, which are as frenetic as they are well-designed, and Hemsworth is certainly a capable leading man. The stakes, however, are never raised to the level they should be and the end result is a film which is not spectacularly bad, but really not that remarkable either. Freya may well be the queen of ice, but The Huntsman: Winter’s War will leave its audience out in the cold.