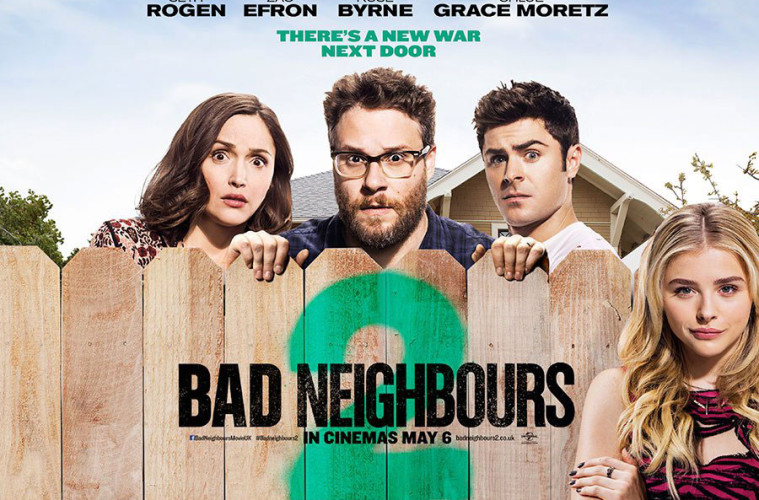 If, like me, you’re not entirely sure what a sorority is, then Bad Neighbours 2 is the film for you. The first film introduced us to a US college fraternity, headed by Zac Efron as the ultimate bro Teddy Sanders. For the sequel, however, a sorority has taken the place of the fraternity, moving next door to long-suffering new parents Mac (Seth Rogen) and Kelly (Rose Byrne).

Intent on partying harder than the frat boys ever did, the sorority threatens Mac and Kelly’s chances of selling their house and so Teddy – thrown out of his flat when his flatmate Pete (Dave Franco) gets engaged – comes to their aid to try and shut the partying down. If you didn’t like the first film, there isn’t much chance of your liking this latest offering, for the simple reason that the film recycles and regurgitates the jokes from the original and, really, offers little new in the process.

Called Neighbours 2: Sorority Rising in the US, where, in the film studio’s opinion, people won’t get confused about why Dr Karl hasn’t appeared at the party, the fundamental issue with Bad Neighbours 2 is its lack of narrative thread which would act as a cohesive background for the humour to work effectively. Jokes invariably revolve around drugs, sex and how good looking Zac Efron is, and after 30 minutes or so, this wears rather thin. A recurring joke about Mac and Kelly’s young daughter using Kelly’s vibrator as a dress-up doll pretty much sums up the crude nature of the humour. Not that crude sexual humour necessarily has to be a bad thing, but without the much-needed support from a well-developed narrative, it all feels a little pedestrian.

Seth Rogen does his usual brand of comedy, but is persistently eclipsed by Rose Byrne whose physical affectations and comedic timing are fun to watch. Of course, Zac Efron is the star attraction, and the film doesn’t shy away from this. In order to distract the sorority so their stockpile of weed can be stolen (thus bankrupting them and forcing them to move away from Mac and Kelly), Teddy hatches a plan to perform a Magic Mike style dance routine in front of all the girls (because what girl could possibly not be distracted by that!).

This self-awareness is fleetingly entertaining, but a shirtless Efron has become a cinematic inevitability – not that many audiences will be complaining. Efron’s appearances in films such as this are all part of shaking off the squeaky-clean image he acquired during his High School Musical days, and you can’t really blame him. He remains an interesting actor with plenty of potential, and his hair must surely be a gift from the gods, but with a re-hashed script like Bad Neighbours 2, he has little to work with.

This sequel has made some attempt to put a new spin on the previous set-up by introducing a feministic streak to the proceedings. Chloë Grace Moretz plays Shelby, the founder of the sorority who is determined to shake off the restrictions imposed upon them by their male counterparts (their parties favour themes such as Strong Women from History, rather than wet t-shirt competitions), and assert herself – and her friends – as strong, independent women. I doubt, however, that this film will be screened at your next local feminist conference…

Bad Neighbours 2 retells the same jokes from the first film, plays on the same riffs, underpinned with the same emphasis on sex, sex, sex (the film even opens finding our protagonists in the same compromising position as the first). It has funny moments, but these get lost in the overall narrative meanderings. Efron’s hair though. On point.