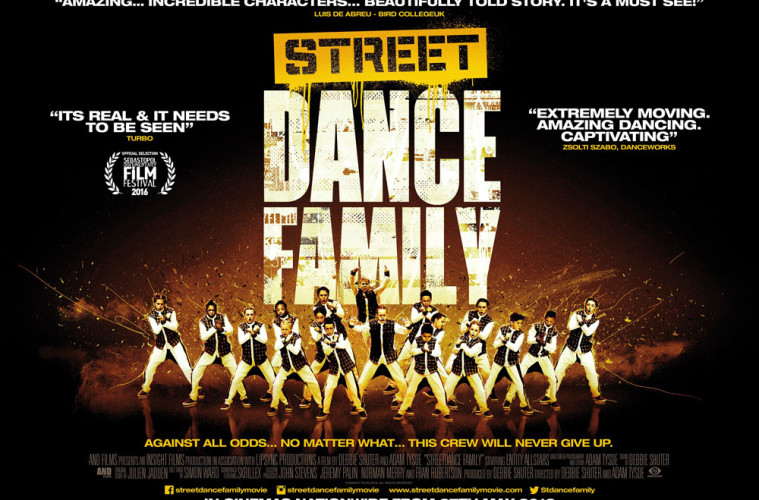 Tickets are available for STREETDANCE FAMILY only in selected cinemas from 27 May. You must book in advance to secure your screening. To find your local screening visit www.streetdancefamilymovie.com

How exactly was the film shot? Were the dance events actually happening or were they re shot for the documentary?

No, they weren’t re shot for the documentary. It was filmed entirely real life as an observational documentary. There was nothing staged about it at all.

Your son, Ethan, was a part of Entity Allstars, as a mother, of course you’re proud but how was it for you to be the mother of a young dancer?

It’s lovely, I do dancing myself so I kind of understand where Ethan’s coming from and he absolutely loves it. It’s a lovely thing for him to do, he stays fit and healthy, and it’s all good. It’s a bit different for competition crews as there is a lot of stress and a lot of pressure but I think it’s a really great thing for him to do. It teaches commitment and how to hang on in there and all of those life skills that you need.

Was he a part of the group when they went on Britain’s Got Talent?

No, he left the group just after the worlds.

Did he watch and regret leaving or have any feelings about it?

You’ve produced a fair few documentaries, how does Streetdance Family compare to these?

Well obviously Streetdance Family is the first doc-feature that I’ve made so I was the director and the producer on this film. I have directed a number of other documentaries as well, but not of this length. I feel incredibly proud of the documentaries that I’ve made but I feel particularly proud of Streetdance Family because it is a real documentary feature for all the family and that feels really lovely to have made something that is properly connecting with audiences young and old all over the country and that actually feels great. I know that we’ve made something really great and I know that Streetdance Family is working and that feels really good.

How long did it take to put Streetdance Family together and film etc?

It took about 2 years and we are going into our 3rd year in terms of releasing the film because of the way in which the film is being released.

Have you ever wanted to do anything that isn’t film and TV related?

Not really, I was going to be a ballet dancer at one point but by the time I got to 16, 17 I was in a ballet company and realised I didn’t really want to do ballet. I think film making is quite similar because it’s telling stories by using words and dance is telling stories without words but there is a similarity about the story telling aspect of what I do now.

Before you became a producer was the dancing all you were doing or was there anything else?

Not really, I realised I wanted to do film, and I made commercials for a while and I was a PA and I did commercials for a long time, actually I started off doing jingles, I was a runner first, I was right at the bottom of the tree as a runner and then I got a job doing jingles, making music in a music studio. Then I got a job as PA in a commercials company, then I worked my way up in there until I was producing commercials and then I made my own little short film called Bagels Already that I managed to get on the BBC and they absolutely loved that and it went really well.

I had a feeling you might say that! Final question, what advice would you give to young, upcoming producers and film makers?

Stick at it and don’t take no for an answer.

Thank you, I hope it was interesting.