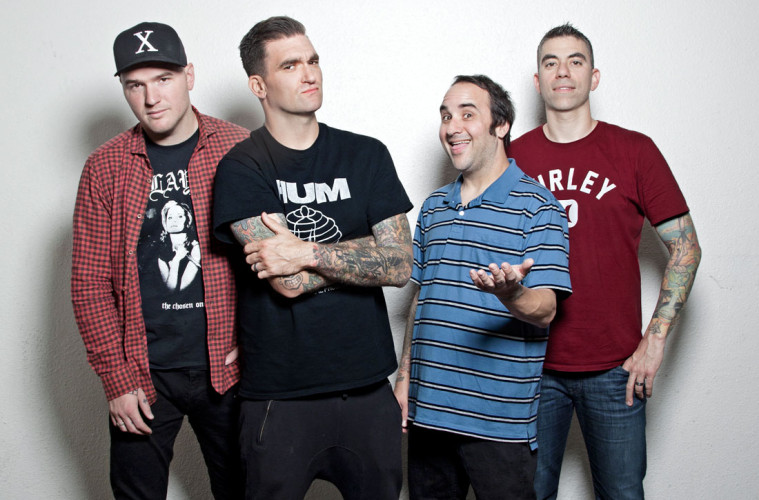 Prior to their appearance at Slam Dunk Festival and Vans Warped Tour we spoke with New Found Glory drummer, Cyrus Bolooki.

Firstly, you came off your Florida Vacation Tour a few months ago which had a few sold out dates on, how did that go? Any funny, memorable moments?

That tour was awesome!  We had a blast playing not only in smaller venues, but also exclusively in Florida, including some cities that we haven’t played in years…we were also able to change up our set a bit each night as well and incorporate some obscure songs knowing that we would have diehard NFG fans at every show, so it kept things interesting for us every night.  As far as memorable moments, this isn’t funny at all, but unfortunately on the very last night of the tour, the night before we were to set sail on the Parahoy! cruise, our van that we had rented was broken into and all of our merch money and some electronics were stolen.  Definitely not the best way to end an otherwise amazing tour…

You’re playing Slam Dunk Festival in a few weeks, the last time you played you headlined in 2010, how does it feel to be playing main stage again 6 years later?

I can’t tell you how excited I am to be returning to Slam Dunk Festival after so many years.  The last time we played it, we had great shows, and seeing all of our friends in bands we’ve toured with was great too…it’ll be the same thing this time around as there are so many awesome bands that we know playing, so everywhere I turn it’s going to be like a reunion of sorts, and I’m very honoured that the festival has us again on the main stage.  However, every year the festival grows what seems like exponentially and I know there will be loads more people than there were in 2010, so this show is sure to be one for the ages!

How have you gone about choosing your set list for Slam Dunk Festival?

It’s never easy choosing a set for a festival, as you almost always are playing shorter lengths than you would on a headlining tour.  However, at this point in our career I feel like pretty much half of our set is already written for us.  These are songs of ours that if we don’t include it might start riots like “My Friends Over You” and “All Downhill from Here.”  But we also try to think of songs to play that “work” with bigger crowds, maybe songs that might have some cool crowd participation or singalong parts, because that’s always a great way to get the energy going in larger rooms.  And lastly it’s cool to try and sneak one or two surprises in there if possible, whether that’s an obscure song or maybe even a special guest on a song.  Those things are last minute decisions, but when they happen it definitely makes for a memorable NFG show, which is something we always strive for.

It’s your only European show this year, how are you going to make it special for those coming along to watch you?

We always try to bring our best to every show, and we’ve been at home for a few weeks too, which means that we’re definitely ready and willing to play shows again, no pun intended.  I think the vibe of the whole festival is going to lend itself to making our performance memorable because we’ll be surrounded by so many great bands and friends of ours, and we’ll want to make sure that our set isn’t soon forgotten!

After Slam Dunk Festival you’re heading on Vans Warped Tour, it’s a very long tour; do you ever get annoyed with each other’s company in that time living so closely together?

I mean, wouldn’t you get annoyed if you shared the same “room” with eight other people for two months straight?!?  Just kidding…we’ve been doing this long enough where I think we all have respect for each other and we know each other’s tendencies and pet peeves, and how to “survive” a tour like this.  It is gruelling, but at the same time Warped Tour is also a great way to spend the summer and I have so many stories and memories from Warped Tour in past years that I will always cherish and I hope to get the same out of this year.

Do you get homesick while you’re on long tours? How do you get over that?

Definitely!  As amazing as this career is – and we truly are examples of people that dreamt big and made it happen – being in a band does take a toll on your social life and family life.  Especially now that most of us have wives and kids, it gets tougher and tougher to leave them each time, but we also have amazing families that understand how special our “jobs” are and that at the end of the day, this is a job and a way for us to provide for our families…it just so happens that it is one of the coolest and most fulfilling “jobs” out there, and we’re very grateful for that!

You released Vicious Love featuring Hayley Williams, what is she like to work with?

Hayley is such a great person and a legend as far as her vocal abilities.  It’s been amazing to work with her, and she’s definitely been a huge help to us throughout the years.  I’m proud to know that she’s part of the NFG “family” now too, being married to Chad, and also super proud for all of her success, she’s definitely someone that deserves it all because of how down to earth and genuine she is.  As far as “Vicious Love” goes, Hayley was the one who pushed to be on that song after hearing it, and we just let her do what she does best and the results were nothing short of amazing.  It’s crazy to see how so many people out there got even more into the song after the version with her came out, and how now in concert we can have the crowd sing some of her parts because of how memorable she’s made those melodies and lyrics.

You’ve all been together since 1997, when did you first meet?

Most of us met while in high school, when we were all about 17 or 18 years old.  A couple of us went to different schools, but we would all go to local shows, and we would see each other there and that’s pretty much the way the South Florida scene was back then.  We all bonded over our love of a few mutual bands, and just started playing and writing music together that we thought was fun and cool, and then tried to book as many shows as possible to get that music out to the public.

After 19 years how do you keep it fresh and maintain a strong following?

I think one of the most important reasons why we’re still here after almost 20 years is the fact that we all have been here since the beginning, we were all there to experience this grow from a small local band into an international career, and we can at any time look back and remind ourselves of how far we’ve come and how much we’ve accomplished together.  I think that mentality really keeps us in check and makes us realize how lucky we are, and that we can’t take any of this for granted.  We’ve also never been ones to try and think of ourselves as “better” than anyone else, or at least we view ourselves as equals with everyone out there, especially our fans.  We know that the only reason why we are still around is because of the support of everyone who has been to a show, bought an album, or even told a friend about us, and we will always be grateful for those that continue to support us year after year after year…

You’ve released loads of albums, are you in the process of writing anything at the moment?

After Warped Tour we plan on starting the process of writing and recording our next album.  I’m sure while we’re on the road this summer we’ll start messing with ideas, as there’s loads of free time while on Warped and we’re pretty used to messing around with musical ideas and recording little demos in the bus.  We’ll take all that stuff after the summer and then record this fall, and that means we should have a new record out sometime next year.

Is the recording process stressful or quite relaxed?

It’s pretty relaxed for us.  We don’t try to set crazy deadlines or anything like that, and we plan our schedule pretty far in advance so we give ourselves time to be creative and write and record the best ideas and songs that we have.  We also at this point in our career know a lot about not only the process, but also our own strengths and how to best use that to our advantage when writing and recording.

What is your career highlight?

It’s really hard to name one moment as a highlight, as we’ve been fortunate enough to have multiple gold and silver albums that have debuted near the top of the charts, music on the radio and TV, and have played shows all over the world to crowds both small and massive.  So I’m grateful to be able to look back at this point and think back to so many amazing memories we’ve had throughout the years!

Which music video was the most fun to film and why?

The “One More Round” video was fun because of all of the fake blood we used throughout the shoot.  I also liked the “My Friends Over You” video shoot because we came up with most of the ideas in the video and incorporated so many of our friends into that video.  But the most fun video was probably “Ready and Willing.”  Why you ask?  Well, because we were barely even in the video!  It was the easiest video to make! Ha ha ha ha….

If you had to use one song in the world to describe your individual personality, what would it be?

Let’s make this fun…how about I keep it in the spirit of Slam Dunk Festival and use a song from one of the bands on the bill this year…would it be “Playmate of the Year” by Zebrahead?  Just kidding…How about an easy one: “Something I Call Personality” by NFG?  Wait, that doesn’t answer the question, it just has ‘personality’ in the title.  Hmmm…this is a hard question…how about I just tell you a song that I love to listen to because for some reason it gets me moving every time I hear it…and that is “Wasting Time” by Four Year Strong.  It’s not my favourite song or the best song ever, and I honestly have no clue what most of the lyrics are, but I do know that I love the melody and the rhythm, and I can’t wait to see them play it live at Slam Dunk Festival!

Finally, just to summarise, what are your future plans?

We have Slam Dunk coming up, then Warped Tour this summer, and then it’s time to begin the next New Found Glory record cycle, which will mean another 2 or so years of touring and shows all over the world before we repeat it again…and again…and again…