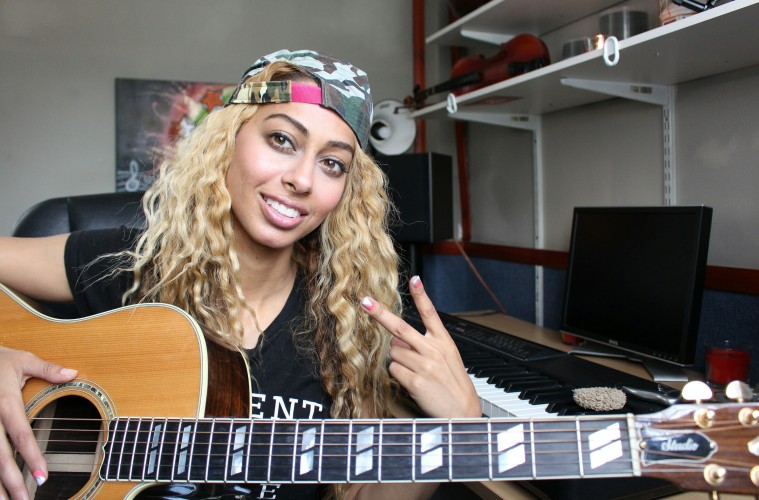 Starting off as a YouTube sensation with Music Monday’s, Sonna Rele is steaming forward with her solo career and with that, she’s signed to Ne-Yo’s record label too. After performing an exclusive for us on SPGtv, we caught up with her to chat about everything to do with music and how Ne-Yo really came to discover her talent…

Hi Sonna! Thanks for taking the time to chat to us, how is everything going for you at the moment? Thanks for the love and providing a platform to showcase what I enjoy doing. Things are going well and on the verge of picking up.

We noticed that your Youtube channel is getting bigger than ever, and ‘Music Monday’ is now a certified gig. Was the idea behind this to give people a mood boost after the weekend blues? Most definitely. Generally people do not look forward to Mondays, so I wanted to put a spin on it; like a musical feel-good energiser, which seems to be coming across well.

So, first things first, you’ve recently signed to Ne-Yo’s record label ‘Motown’ and congratulations! How did he go about getting in touch? Well it’s a crazy story. I’ve been doing my Music Monday’s for about the last 2 years without fail. The story that was told to me was that he was checking out new talent and where better than online? Through that search he stumbled across some of my videos and reached out.

He has also described your singing as ‘refeshing’ and ‘unique’ but to sum up, how would you describe your style in three words? Authentic, fun and quirky.

We saw that your inspirations in the music industry stem from legends such as Stevie Wonder, The Beatles and Michael Jackson, but which person, past or present, would you most like to collaborate with and why? Michael Jackson hands down. I think he is a musical genius and performer. Also his song lyrics are so powerful and moving, and he appeals to all ages.

Not only that, but you’ve already collaborated with some industry giants including Ne-Yo himself and Wyclef Jean, so who has given you the greatest piece of advice overall? Ne-Yo, when he told me that it’s not a sprint it’s a marathon. So think long term.

Moving aside from music, you’re a London girl! We love the capital city, but what is your favourite thing about living there? I absolutely love the multi-culturism which allows us to experience more, learn more, and effectively grow more.

And your website states ‘There is nothing that beats a good cup of tea’, so what we want to know is what’s your biscuit of choice? That’s a tough one but I guess I’d have to say shortbread biscuits.

Back to your fan base now, and you have a whopping following of over 300,000 on Facebook and 80 plus videos on Youtube! How does it feel to be so big? Did you ever think you’d come to this? Honestly, I can say my focus is never on the numbers and how big I get unless it’s in direct proportion to me being able to touch people. My thing is just to keep creating great content and make music with depth.
Next stop is the single release featuring Ne-Yo, how excited are you about this? Super excited. He is a Grammy award -winning artist, and for me to collaborate with him and merge our talents is a true blessing.

He performed with you on YouTube too! Did he stay round for a traditional Sunday roast the day before ‘Music Monday’? Actually, yes we had a great meal after filming was done. We actually shot at his place in L.A on the same day he was throwing a BBQ, so it was as good as having a roast.

Will we see you on tour soon here in the UK? We’d love to come down to a gig and watch you perform! Without a doubt. My only focus now is to perform the music I have been locked away making.

Hopefully we’ll see you smashing the top of the charts soon, but where do you see yourself in 5 years time? Doing a world tour and still inspiring others to chase their dreams.

And finally, have you got any advice for our aspiring students today? Any tips on how they can achieve their goals? Like Ne-Yo said to me… ‘it’s not a sprint it’s a marathon’. I would add, ‘when you close your eyes at night, your main priority should be to feel happy with each 24 hours’.