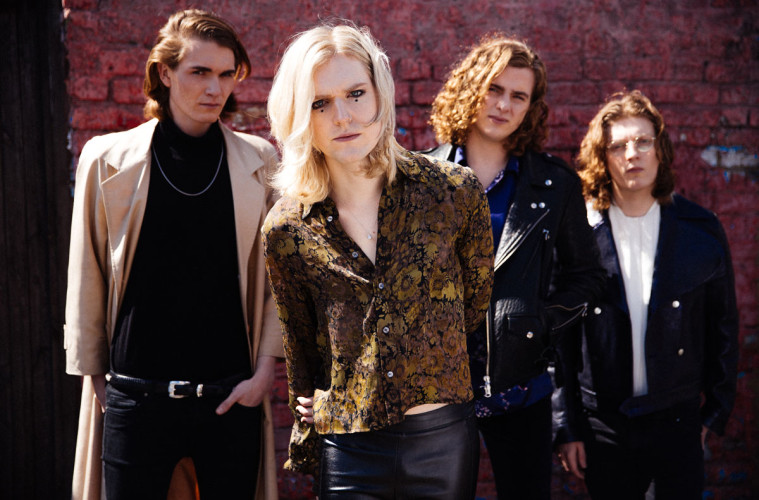 We spoke with Oscar Lulu, vocalist of Sundara Karma, about their new single Loveblood and their appearance at Reading and Leeds Festival later this year.

I’m very good, how are you doing?

I’m good thank you! I’m going to start at the beginning, how did you come together as a band?

Aww, so what made you want to be in a band?

Aside from the School Of Rock cast, who are your musical influences?

Like every singer I listen to become an influence in some sort of way. The big ones when I was younger are like Pink Floyd, The Cure, Joy Division, Neil Young, Radiohead.

The music video for your new single Loveblood came out on Wednesday, is there any reason why you decided to do it that way? Red is quite a dark colour for a song which isn’t at all dark.

I think it looks instantly nice and it felt like quite a bold thing to do and we’d never really seen a video like it. I think it works with the song because obviously blood is red and in that sense it works.

How long did it take to film?

It was just a day’s worth of shooting.

Was it quite quick or were there a lot of shots that didn’t work?

Yeah it was alright, there was quite a lot of waiting around but that’s normal. I guess it was painless. It was actually a lovely experience, Michael was a really nice guy and the whole team were really easy going and easy to get along with and we felt really comfortable around everyone.

What kind of response have you had about the video from the fans?

People love it! People have been really vocal about it, more than other videos. It’s been a really good response.

You said that it’s your favourite video yet, any particular reason why?

I think we just said everything we wanted to say in that video a lot of the time you see the video and it doesn’t come out how you thought it would in your head and I thought with this one it just did. There were no regrets.

You are quite hyped about at the moment, like you were just on tour with Nothing But Thieves, another band who like you, have just really started to get quite big.

You’ve named your tour after the single so ‘The Loveblood Tour’, are you going to be doing anything different to usual?

Nope, it’s just branding, so we can get more money out of people I think probably *laughs*. We are doing badges as a little special trinket thing, red badges and we are giving them away for people who come to the shows, so I guess that’s a nice little gesture.

So everyone will just have little red badges on, that’ll be cute.

What’s your drink of choice on tour?

Drink of choice would be like, a Mojito, or a cocktail, but unfortunately, we don’t really get to choose and it’s just beer most of the time.

That’s a different answer. I’ve never had anyone say that their drink of choice is a cocktail.

How do you keep every show fresh?

You’ve already got quite a big fan base, how are you continuing to grow it and make sure people stick around?

Umm, I don’t know, we just want to put out good songs and if people still like the music we are putting out then great, if not then f**k it, we’re alright with being lonely.

Is there anything that would make you think ‘we’ve made it’?

Nice, I like that! You’re opening main stage at Reading & Leeds, how are you going to make the most of this opportunity?

I think maybe just say something along the lines of ‘free the whales’ and yeah just good causes.

Fair enough! Do you still get nervous?

Yeah we do get nervous. We haven’t really had the chance to think about it but I don’t think R&L is going to hit us until moments before we play. I think we’ll be excited, a little bit terrified but we won’t let it get to us, I hope, I might just choke and nothing will come out but I think we’ll be ok.

I’m sure you’ll be fine! Final question, what are you up to for the rest of the year other than the festivals and the tour?

We are putting an album out in September, October kind of time and yeah more music will be coming out, more wacky red videos and probably a holiday at some point would be nice.

Where would you go?

Probably somewhere I’ve never been so like Iceland or something.

Thank you for speaking with me! Bye!

Thank you very much, bye!