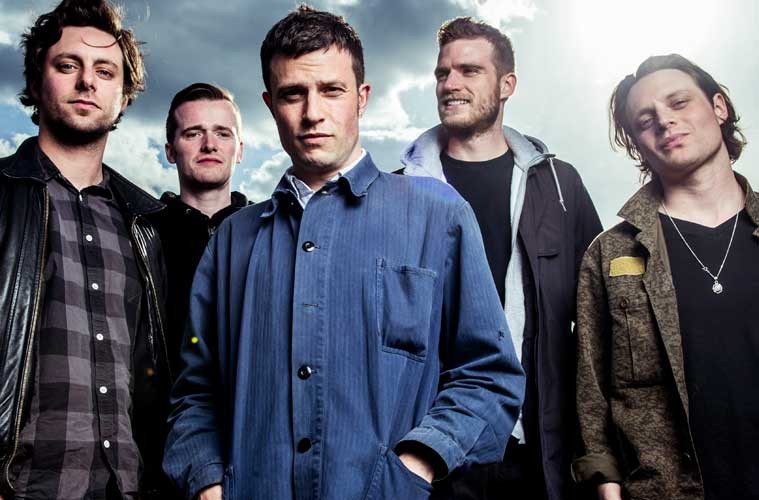 Brothers and guitarists Felix and Hugo White walk into the reception area of the Brighton Dome as we sign in. After a shake of hands, their politeness extinguishes the moody rockstar stereotype.

The five-piece (completed by frontman Orlando Weeks, bassist Rupert Jarvis and drummer Sam Doyle) are playing a sold out gig as part of their UK tour, off the back of their first number one album ‘Marks to Prove It’.

We are led into a spare dressing room that feels like we’re stepping into a furnace. There’s a kerfuffle about chairs and Hugo and Felix immediately leave to go and retrieve some so everyone can sit. Front man Orlando emerges at the door sporting a beanie hat and asks how we are? We feel like the rockstar!

The brothers return with the chairs and we sit, not before they are given a cup of tea each.

Here’s what they had to say about the struggles of making their latest record, playing at Glastonbury, and their friendship with Jamie T.

With almost three years between ‘Given to the Wild’ and your new album ‘Marks to Prove It’, how do you feel you’ve developed as a band and how did it impact on the new album? Felix: It has developed a lot but we had to strip back quite a lot as ‘Given to the Wild’ had many textures and layers to it. We tried to do a second ‘Given to The Wild’ and it didn’t quite work. It meant taking a lot of stuff out. We were trying to make it sound vulnerable and open and real, at places where the last record didn’t.

How was it getting your first number one album? Hugo: Yeah it was great. We’ve never been within reach of that before, so to actually have it go to number one was amazing.

It was a bit of a battle wasn’t it? Felix: Yeah, with Lianne La Havas. I think we were pretending we didn’t care that much. Hugo: We were waiting to find out just before boarding a flight, we were all saying to each other “oh yeah number two is fine. Number two is really good!” But being that close we definitely wanted to be number one.

Adele kindly called you the most consistent band around at the moment – would you agree with her? Hugo: It’s very sweet of her. I read that and she said she’d been watching us for a long time. There are a few people from that time in our lives that we still see. I guess we have been consistent and we definitely haven’t taken a break.

Did you grow up in a scene with people like Adele and Jamie T then? Felix: Not so much a scene. I actually first met Jamie T in Brighton. We were playing a place called Ocean Rooms. There were three floors and you had live gigs on the ground floor and raves downstairs and at the time he was trying to make it as an MC. We played to about seven people and this kid in a cap comes up to me saying he wanted to get a band together. We swapped numbers and it turned out he was rapping downstairs! 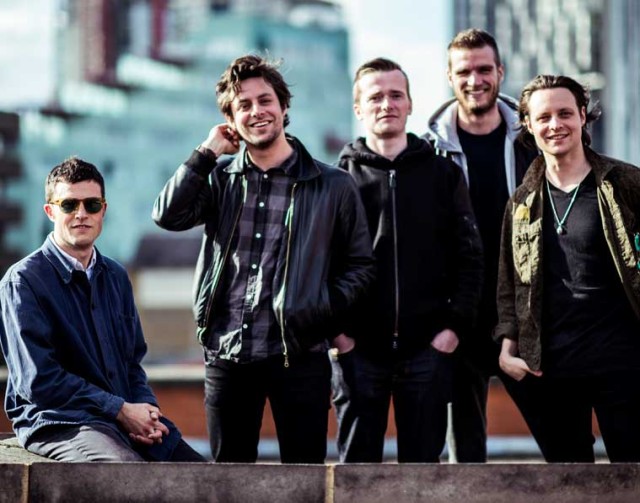 You produced this album Hugo. How did that go, as we know you had a lot of problems when recording ‘Give to the Wild’? Hugo: The previous record was probably the thing that led us to doing it this way. We’d worked with good producers in the past but between ourselves we had all these grand ideas, and in our heads we knew what we wanted to achieve. With ‘Given To The Wild’ I don’t think we had the confidence to take it further than the demos ourselves, and so we got some producers in and it all went a bit wrong. It got lost in translation and that record became a bit of a rescue project. We took the files back to our studio and worked for a couple of months trying to make the record how we wanted it. Once we finished that and it went well, it was clear that next time we were just going to do it ourselves.

Were your label okay with you producing it yourselves? Hugo: Yeah they were totally fine with it. Felix: I don’t think they would have let us produce our first album ourselves though [laughs]. I think because we sort of rescued the previous record there was a level of trust there.

You’ve said that recording this album was really stressful. How did you get through the stress of recording the album and the heavy schedule you set yourselves? Felix: I sometimes regret having said it’s been stressful as other bands in the past have presented their music as if they’ve come up with it out of thin air which is kind of cool and has an air of mythology about it. But I think the reality is that doing anything that you’re proud of means you have to put in all that effort. Sometimes people do come up with songs in five minutes but what they don’t tell you is that they’ve been trying and working on songwriting for fifteen odd years, and all that experience leads up to that moment. So maybe we’re a little too honest.

A lot of artists have a team of writers as well that help them, what do you think about that? Hugo: It’s amazing, but it’s so different to us. Everything we’ve ever done has been created solely between us. You look at the chart-topping music, you look behind the song and think “Wait, there’s like six writers on that?!” Of course it will do well! I mean there’s a real art and a talent to be able to do that, but when there’s things in place for an artist you can pull together the best people in the world and write a hit, and our way is like, okay cool let’s try and figure all of this out.

That must make you a lot more proud that you went to number one, having done it all yourself. Hugo: Oh yeah, it definitely does. Felix: I think you’ve got to own your own successes and failures, don’t you? You know even if it’s a total failure, it’s nice to know that it’s your failure.

What advice would you give to bands starting out at the moment? Felix: I’ll tell you what is the best thing about bands. There’s a coincidence or circumstance of personality which makes it special. It hasn’t really got anything to do with virtuosity. There’s just something magic about a little group of people that get together and it works for whatever reason. So it’s about noticing what’s special about your band and embracing that. It might not be the same as any other band and you wouldn’t want it to be. It’s about harnessing the personalities in your band.

Drenge are supporting you tonight, how involved are you in choosing your support? Felix: It’s almost always our decision. I have known Drenge’s music for a few years and to be honest I was surprised they did it, as I thought they’d be slightly too big so it’s really cool to have them.

You supported Kasabian on their tour last year, are you still able to learn from the bands you support? Felix: I learnt a lot off Kasabian, but mostly from their infectious enthusiasm for everything. If you want to be around positive energy then just spend a month with Kasabian. Hugo: All they have in their dressings rooms is sweets. Everyday it’s just Haribos everywhere.

Jamie T joined you on stage at Glastonbury for ‘Marks to Prove It’, have you ever thought of having Jamie or anyone else feature on a record? Hugo: I think that would be great. I think if we’d thought of having him on something we would have definitely asked him. I guess we haven’t really done something like that on our records but I think it would be interesting.

Speaking of Glastonbury Felix, you didn’t stop smiling during your set this year. Was this a landmark occasion for you? Felix: To be honest, most of the time we play I feel very happy. I enjoy the feeling of being present and alive, it makes me feel great being in The Maccabees. I think the only difference with Glastonbury is there’s a bloody big screen that’s catching you doing it. There was a funny thing at Brixton Academy as well. The lights there cast massive shadows of your body so you can just see yourself silhouetting across the venue and I remember being freaked out by it.

What are your opinions on the state of British indie music at the moment compared to how it was when you started? Hugo: There’s a danger now because it’s all so quick. If you put music out now everyone can see it instantly and I guess with us it was still at that time where all the demos we made were only given to the people we gave it to by hand. Whereas now once it’s online, people start seeing it and there’s no way of holding it back.

What up-and-coming bands are you listening to at the moment? Hugo: There’s a band called Gloss we saw in London and they’ve got a single out which is really cool, it’s early days for them but it looks really promising and exciting. Felix: I like The Magic Gang from Brighton. I saw them support Wolf Alice and they just had a thing where it seemed like they just enjoyed each other’s company and enjoyed playing.

So are you eager to get back into the studio after touring or are you going to take a well-earned break? Felix: I can speak on behalf of the whole band when I say we’re not that eager to get back into the studio! Especially after last time we went straight back in so we’ll take this as far as we can and have a few months where we have a bit of distance from The Maccabees, because we haven’t for ten years.

That’s fair enough, you’re definitely allowed. Hugo: We’ve been waiting for someone to say that!