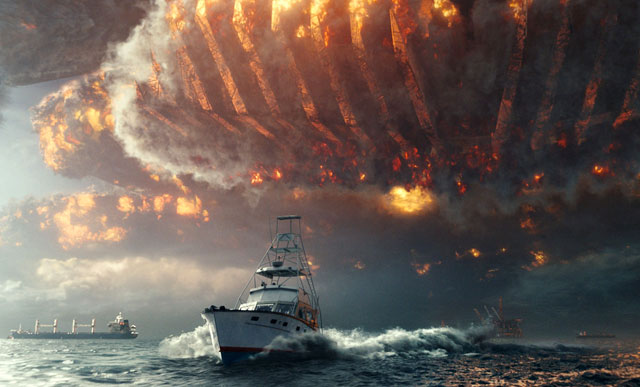 Anyone who has visited New Zealand (or, indeed, watched Lord of the Rings) will know how stunning its scenery is. It is a country where every bend in the road promises a new vista of spectacular lakes, wide-open valleys or impressively-big mountains. The beauty is on an immense scale. But, spend more than a few days there, and the striking nature of the country starts to lose its original power and wondrous appeal.

Towering mountains become “just another” set of imposing natural wonders, and breath-taking scenery blends together into a big, overwhelming landscape. You know it’s enormous, and you know it’s amazing. But it’s on such an unimaginable scale that it loses its impact. In other words, you become desensitised to the spectacle. This was exactly how I felt watching Independence Day: Resurgence.

It has been 20 years (yes, 20!) since the original Independence Day was released and enjoyed something of a cult following. It turns out, however, that that apocalyptic battle between man and alien was just the beginning, and this time, the aliens are back and bigger than ever. It would appear that Roland Emmerich has something against planet Earth, as he not only directed the first film, but also helmed the equally-destructive disaster films The Day After Tomorrow and the ridiculous 2012.

In Independence Day: Resurgence, he out-does himself in terms of humongous aliens and proves that size really isn’t everything. In a script which is heavy on action, and attempts some jokes (most of which fall flat), the ambition is to be admired. Even though the stakes couldn’t be higher, paradoxically, the threats never seem to matter.

Familiar faces return for this battle, as well as some new characters with a link to the destruction in the original. Jeff Goldblum – easily the best thing about this film – returns as David Levinson, who is now the Director of the Earth Space Defense (ESD) organisation which is tasked with protecting the planet from another alien invasion. When a mysterious alien ship appears near the Moon, the ESD takes immediate action to shoot it down, much to Levinson’s dismay as he believes that it may be a different species from the hostile aliens which previously attacked the Earth. Sure enough, it turns out that the real threat is yet to appear, and although Earth is now equipped with alien weapon technology, it falls to Levinson and ace fighter pilot Jake Morrison (played by Liam Hemsworth) to fight the invaders.

Hemsworth’s easy screen charm does a little to flesh out the characterisation in the film, but the consequences of the massive destruction never seem to amount to much. The alien space ship, complete with Queen alien inside, crashes into Earth, scrapping the surface and literally covers a quarter of the world. Yep, it’s big.

As well as Goldblum making a return for the sequel, Bill Pullman reprises his role as retired President Thomas J. Whitmore who, rather bizarrely, jumps into a fighter jet in an attempt to destroy the alien mothership. Judd Hirsch returns as Levinson’s father, and Brent Spiner puts in another full-on performance as Dr Brakish Okun, who awakens from a 20-year coma. Will Smith is the notable absentee, instead his son (played by Jessie T. Usher) carries on his alien-battling work.

The plot plays out as you’d expect it too, and although the visuals are impressive, the whole thing is too big, too unrefined and too outrageous to sustain a credible narrative or any engaging characters. For a film with laudable themes – people setting aside differences and uniting to work together for the common good – the humanity gets lost amongst the immense destruction.

Blockbusters such as this are meant to be spectacular, and this one certainly packs a visual punch (especially in the film’s dénouement when a bright yellow school bus, driven by Goldblum, screeches across a deathly-white salt flat). The aliens, too are well designed. But, at the end of it all, the chaotic action, its outlandish scale and destruction, numbs the audience and it ultimately all seems rather inconsequential.