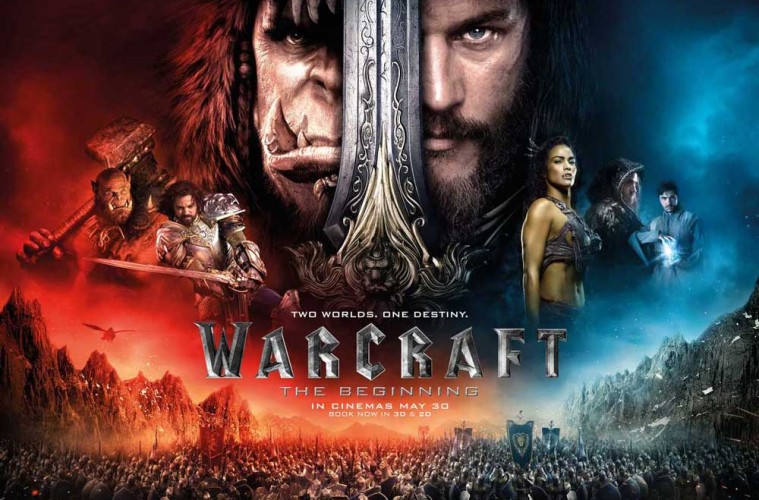 The road from video game to cinema screen is a perilous and an often unsuccessful one. All too often, the essence which made a video game popular is lost in the translation to film, leaving critics cold and non-gamers confused. Recent examples of controllers being replaced with popcorn include Hitman: Agent 47 and the needless The Angry Birds Movie, and many more are planned including Assassin’s Creed (exciting) and a Chinese-backed big-screen version of Tetris (less-so).

If you can’t wait for that block-building excitement, Warcraft has just hit cinemas, based on the hugely-successful online role-playing game which, at one point, had over 12 million active subscriptions. Games like World of Warcraft are big business, and producers hope that a movie version will be just as successful.

Directed by David Bowie’s son Duncan Jones, Warcraft is set in the fantasy world of Azeroth which comes under threat when an orc army invades through a magic portal, fleeing their own dying world which has been corrupted by their leader Gul’dan (voiced by Daniel Wu). We’re told in the film’s opening minutes that men and orcs have eternally fought one another, and the subsequent two hours (!) of tortuous action certainly upholds this proclamation.

The humans are led by King Llane (played by Dominic Cooper) and a military commander by the name of Anduin Lothar (Travis Fimmel), and the pair come up against the evil orc Gul’dan and his magic powers, known as the Fel. Throw in a few mystical mages – Khadgar (Ben Schnetzer) and his master Medivh (played by Ben Foster) – and you have yourself a film which just ends up being a blur of messy storytelling.

If all these strange names leave you rather confused, then Warcraft probably isn’t the film for you. Indeed, one can’t help thinking that World of Warcraft players will be the only ones to gain real pleasure from proceedings. The film is a patchwork of derivative themes and imagery which will, at various points, have you thinking of Game of Thrones or The Lord of the Rings, and although the production design is vivid and imaginative, it carries through far too much of the video game aesthetic. The armour worn by the human soldiers looks far too impractical to be of any use, and the orcs are colour-coded with an alarming simplicity: lighter skin equates to characterisation and dialogue, dark green equals mindless human killing. I get that this is a fantasy film, but still.

Not all of these orcs are completely evil, however, and our sympathies are demanded for Durotan (voiced by Toby Kebbell), the chief of the Frostwolf clan who seems to be the only orc who sees through the destructive power of Gul’dan. With a new (and rather cute) orc baby, Durotan has a son to follow in his footsteps and therefore has something to fight for other than the future of his clan. To the uninitiated, “orc” might conjure up ideas of snarling and bony creatures (á la Lord of the Rings), but in the Warcraft world, they are imposing, bulked-up warriors with a set of lower fangs which makes them resemble warthogs, and a strict sense of honour which comes into play towards the end of the film.

The human characters are pretty bland, and Dominic Cooper’s line delivery results in a rather underwhelming royal presence. Things are not helped by a weak narrative which seems more concerned with establishing the potential for a sequel than creating an exciting film for newcomers to the franchise and established fans alike. There’s so much going on in the film that Jones struggles to control all of its noisy elements, and the end result leaves audiences cold to the characters and their predicaments.

Paula Patton plays a half-human, half-orc female warrior and is pretty much the film’s only attempt at developing interesting female characters. There are a few pretty intense scenes (particularly when the evil magic of the Fel drains the life from poor villagers and other unfortunate characters) and I couldn’t help thinking that the film’s editors had to work hard for the 12A rating. Seeing it in 3D will also guarantee a lot of blood splatters from the chaotic battle sequences.

It’s a shame that Duncan Jones, whose previous work includes the brilliant sci-fi films Moon and Source Code, seems to have dropped the ball with Warcraft. Perhaps it’s because he is a fan of the original games that he got tangled up in its universe and lost sight of a clear – and compelling – narrative which would have had the same punch as the film’s visuals. Warcraft is not a total disaster and will please die-hard fans. Ultimately, however, it will become another casualty of the difficult journey from computer screen to cinema screen.