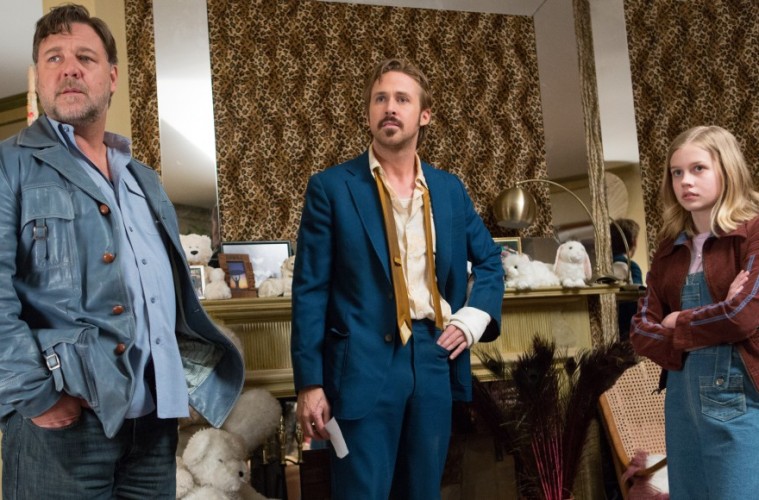 From the moment The Temptations’ “Papa Was a Rollin’ Stone,” kicks in and the old Warner Bros. logo flashes across the screen one can’t help but be hooked by The Nice Guys. It’s been eleven years since Shane Black made his directorial debut with Kiss Kiss Bang Bang after toiling away in the writers room for years and while it’s been much too long since I’ve seen that Robert Downey Jr./Val Kilmer crime caper I have to imagine the cult following it has amassed since its release over a decade ago is happy to see Black back behind the helm of what he does best. Though Iron Man 3 may be the most divisive Marvel film of the bunch, Black clearly has a knack and a love for crafting stories from a time in which he obviously remembers fondly and nostalgically despite those times being admittedly reckless and ill-conceived. We are dropped into 1977 Los Angeles immediately, the music blaring, the now goofy clothes worn with honor, and a smog settling in over the skyline that immediately sets the tone of something being slightly askew. The magic of Black’s touch in crafting the exact right tone he desires is that of not making this skewed feeling strictly pertain to the events of his story, but more it applies to the characters that will operate within this series of events that Black has crafted to more or less exploit the type of characters and the type of relationships he finds interesting and funny. That is all to say the plot actually matters very little here, but instead it is the chemistry of our two leads and the understanding with which they convey Black’s dialogue and character qualities that make The Nice Guys more of an exception than the rule. Sure, there might have been two other actors that might have pulled this off in a similarly successful fashion and I’d even be willing to bet that replacing Russell Crowe with someone along the lines of a Liam Neeson or Kyle Chandler might have yielded better results, but Gosling absolutely owns his role and is essential to the movies success. This is Gosling’s movie-make no mistake-and it will solidify both his presence and his talent as being among the most appealing in the business today (as if it wasn’t already). As it is though, The Nice Guys is a buddy cop film that excels in creating a buddy dynamic so fun and compelling that all the cop stuff hardly matters.

Something is awry in Los Angeles as a storm of death surrounding major players in the porn industry begins drawing a swarm of attention with the point of connection being a film that stars first time actress Amelia Kuttner (Margaret Qualley) bringing both Gosling and Crowe’s separate P.I. characters to the scene. Holland March (Gosling) is a single father who has been hired to investigate the apparent suicide of famous porn star Misty Mountains (Murielle Telio). Misty drove her car off a ledge and was pronounced dead on the scene, but her aunt swears that she saw her two days later when she went to Misty’s house to collect her belongings. Is Misty still alive? Given her aunt possesses glasses the size of Coke bottles March is suspicious of what the woman might have actually seen. Hot on the trail March is lead to Amelia where he comes face to face with a less licensed and more hands-on private eye named Jackson Healey (Crowe). Coming to figure out (after a few broken bones) that they were both hired by the young activist that is Amelia to aid in her plan of disappearing completely neither March nor Healey can deny the intrigue of what the bigger picture might actually be surrounding this case-that and there are plenty of people offering up solid payments to the point March can’t help but to keep being reeled back in. The situation takes a turn when Amelia actually does vanish and it becomes apparent that March and Healy are competing with several, no doubt more nefarious parties, to track down and find Amelia and whatever secret piece of information she might be hiding that is apparently quite valuable to a good number of people. Against both men’s better judgement they are forced to team up in order to get to the bottom of a rather convoluted mess of bad girls, even badder guys, and a plot involving the porn and automotive industries that all lead to something akin to a government conspiracy headed up by Kim Basinger. If that all sounds a little kooky that’s likely the way Black prefers it as he feels right at home in a world filled with eccentric goons and mermaid strippers that each factor into the eccentricities key in making our two leads seem like the most level-headed people in the film.

The Nice Guys is one of those films that is a perfect blueprint for taking old tropes and archetypes and putting a unique enough spin on them that doing these things well is just as good if not better than coming up with a completely original story. Black and co-writer Anthony Bagarozzi know exactly what they’re going for here and have thus crafted a story around what seems to have been their favorite parts of movies from the same era in which this film is set. What ends up taking a lot of the wind out of the movies sails though are the pure mechanics of the over complicated plotting. Though I understand the need to try and craft a mystery or conspiracy that feels as if it has unique or different approaches to such schemes, but no matter how one goes about it at this point-it all feels familiar. To have streamlined the plot or at least created less resistance in the number of people going after Amelia would have allowed for the film to breathe a little more while still remaining believable in terms of our rather dense detectives figure out the master plan. Beyond the admittedly overstuffed plot of the film though, Black and Bagarozzi also attempt to implement a few themes that come from the life experience of these two main characters. Chief among these is the idea that kids know too much these days and that the days of ladies and gentleman are over. To combat these disappointing truths is the character of Holly (Angourie Rice), Holland’s daughter, who is the most mature presence in the entire film. After experiencing a tragedy dealing with her mother and being left to more or less look after her alcoholic father she recognizes that he’s not a very good or nice man, but that he means well even if he doesn’t know how to particularly convey it. Holly is the steady hand that keeps not just the movie in line, but the events moving forward rather than allowing them to stall. In the role, Rice is rather exceptional going toe to toe with both Gosling and Crowe and coming out as the true heart of the film. The Nice Guys also touches on the subjectivity of truth and how, depending on perspective, multiple people could think they were right. This is what comes to be the prevailing idea of the film, but it is through the character of Holly coupled with Rice’s performance that even though there is indisputably two ways of looking at all things-it is her decisions, her judgments, and her calls that we end up trusting and finding solace in.

Rice holds this movie together, especially in its somewhat wonky final act, but it is Gosling’s comedic turn here that will make this one of the more memorable films of the year. As March, Gosling is an endearing screw-up. He’s a detective with no sense of smell. He’s a P.I. who isn’t exactly proficient with a gun, and who, upon meeting Crowe’s Healey for the first time, winds up with a broken arm that naturally inclines him to rip all the sleeves on his suit so that they fit around his cast. He’s an alcoholic who constantly takes the Lord’s name in vain, but defends doing so because he swears it is actually not in vain, but in fact with much hope that God will lend him a helping hand. All of this creates a fully formed and consistently hilarious character that delivers one of the most resoundingly funny and entertaining bits I’ve seen on film in a long time. Whether it be in Crazy Stupid Love or last year’s The Big Short it’s always been clear Gosling has a serious penchant for comedy and in being allowed to explore that fully here he absolutely kills it. I would watch The Nice Guys on repeat solely for his performance and how genuinely he made me laugh just with certain movements or sideways glances. That he is complimented by the likes of Rice’s captivating young Holly and Crowe’s diligent and assertive, but still well-humored Healey only make his performance all the more effective. Matt Bomer also shows up in a handful of scenes displaying more of fully formed identity with a character than I’ve ever seen from the actor (I haven’t seen White Collar) and he does a solid job of being both appealing and menacing in the same look. It is through these characters that Black finds his real comfort zone as the dialogue heavy scenes that take place in between the shoot-outs are far more interesting no matter how well choreographed the gun fights are or how blunt and brutal the hand to hand combat is. And while the film does contain a fair amount of action this is first and foremost a comedy that upends so many tropes of the genre its clearly writing a love letter in such clever ways that the comedic effect of such gags is equally as great to how surprising it is when Black uses this same technique to elicit substantial dramatic effect. The Nice Guys may not be the complete package, but it’s damn near close and if Black is willing to wash away some of the plot hang-ups from this origin story another adventure with these two is more than welcome.