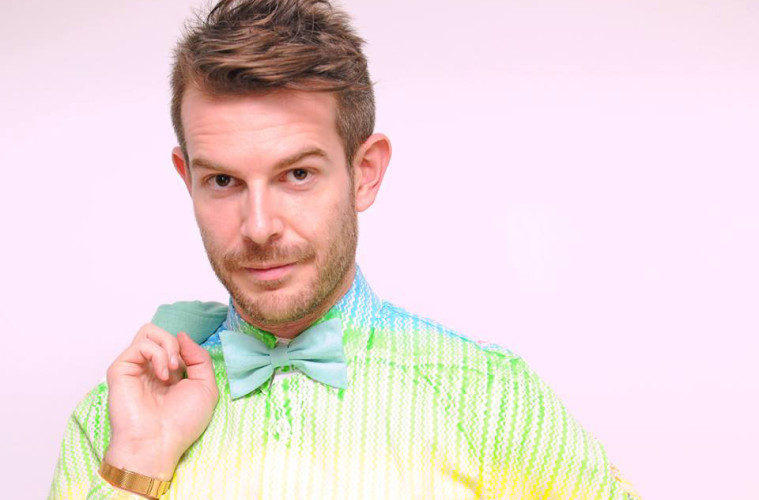 We spoke with Bright Light Bright Light prior to the release of his new album Choreography which can be pre ordered here. Album includes new track ‘All In The Name’ ft Elton John as seen on Graham Norton!

Hello, how are you?

Your album ‘Choreography’ comes out July 15th which features Elton John, Scissor Sisters and more, who has been your favourite person to work with so far?

What’s your favourite track on the album?

Little Bit, it’s the last one that I wrote for the album so it was a spur of the moment song that came out of nowhere and I get to play a lot of sax on it so it’s really fun to play live!

You performed ‘All In The Name’ on Graham Norton with Elton John, what Elton like in person?

He’s amazing, he’s a really big music fan which is really wonderful to see because he’s been working in the industry for such a long time and his enthusiasm for finding new artists, new music and records hasn’t changed at all in all that time. He’s one of the few people that really reach out to artists when they are trying to establish themselves, he gives advice, encouragement and opportunities, like taking me on the road for a year, he didn’t have to do that. He’s very generous with his time and his experience and he’s really really funny. It’s crazy to see somebody who is that much of a legend that is just hilarious and brilliant to hang out with and incredible to listen to.

The music video for ‘All In The Name’ is all dancing, do you come from a dance background?

No, I never really did any dance stuff until these videos but I knew I wanted to and I’ve always loved dance sequences in films and musicals so I wanted to have that fun and energy on a record so I worked with a choreographer to help make that happen.

How long did the dance take to learn?

We created and learned it in a week.

Yeah it was really intense, it was super fun though. You know when people do crash courses for a driving test? It was kind of like that but a lot harder.

You’re going on tour after the album is released, what can anyone going to these shows expect?

Loads of fun, I love to have fun on stage with my band and get people in the crowd bouncing.

Is there going to be much dancing?

There is going to be a show in Wales, which is Choreography in whole. It’s in Neath, Gwyn Hall on the 23rd July and that’s going to be me and six dancers doing the album start to finish. The other ones there isn’t going to be as much dancing involved.

That sounds cool! Do you have a support act confirmed?

Not to my knowledge actually.

You do quite a lot of different things, DJ, producer, singer ect, what was the first thing you did musically?

The first thing I ever did actually was learn the flute when I was a child. That was very different to what I do these days really. I started writing songs when I was thirteen and I worked for a record company for a while and then I was a busker on the London Underground for two and a half years, and then I started DJing when I started thinking about making electronic music. I always loved pop music and dance music and when I started DJing, it really helped me work out what kind of energy and sounds I wanted on the record, so it kind of grew from being a folksy performer in to doing something a bit more electronic.

What made you want to start with music?

I don’t ever remember making a conscious decision to, it’s just something I’ve always done.

Yeah, I’m a massive Gremlins fan, I’m a huge 80s and 90s film fan and that’s largely what this new album is based on, my love of Mannequin, Gremlins, Home Alone, all those kind of films, they really stick with you and I’m a huge fan.

Me too, I named my cat Gizmo. What is your favourite song at the moment?

Just to finish off, what are you up to after the album release and tour?

I’ll be making another album, the album tour cycle tends to take a few years really to make sure you get everywhere. I’m always writing, always producing, I’ll be working with lots of different people so always keeping busy!

Thanks for the chat! Bye!

Thanks for taking the time with me! Bye!