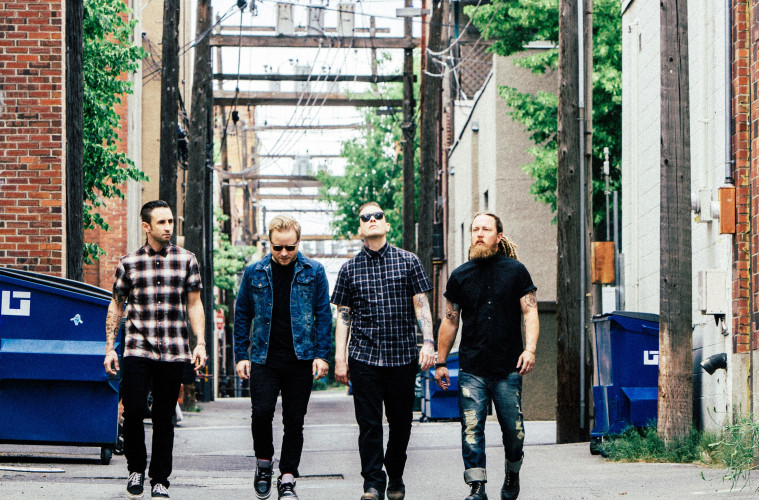 We spoke with Shinedown guitarist, Zach Myers prior to their appearance at Download Festival this Sunday! We spoke about set lists, Halestorm and strange fan gifts.

I’m good thank you, so you’re playing quite a few festivals this summer, but Download Festival is your only UK date, how are you going to make the most of this?

Um I don’t know, it’s the first time we are on the main stage and it’s going to be a lot of fun! We’ve got 50 minutes so we’ve got 50 minutes to make it as special as we can. We just did the UK in January so we want to come back and do more UK dates, I imagine at some point during this record cycle, maybe Spring next year we will come back and do a proper UK headline tour, but we are going to take our 50 minutes on the main stage and make it as energetic and as exciting as possible.

We haven’t, I usually make that the day of the show so I’ll probably start on that one a little bit before because it’s 50 minutes, we’re used to playing way longer than that so we’ve got to figure out which songs to cut out and which to keep in for sure.

How do you go about deciding what to play?

I’ll look at two things. I’ll look at what we feel like playing that day and what we’ve played before, especially with headline shows. Festival shows we mostly just pick through singles, we’ve been lucky enough to have 21 singles now so I’ll just pick 50 minutes, probably about 10 songs, they’ll probably mostly be singles though.

Is there anything that you are doing in your set that fans can look forward to?

Oh I don’t know, we haven’t decided yet if we are going to do anything out of the ordinary from what we usually do. I know that stage has a lot of good bands that day so I’m sure it’ll be a lot of fun, especially with Halestorm and all those guys on there. It’ll be a good time no matter what.

Is there anyone that you are going to be watching?

I really want to see Ghost that day; we just played a bunch of festivals with them back home in America. I really want to see Maiden and we just did some shows with Monster Truck and they’re going first on the main stage so that’ll be fun! I’m looking forward to seeing a whole bunch of bands.

How do festival crowds differ to your own crowds?

I think there’s more of an excitement in the air because I think people are looking forward to that festival vibe, most of the time they have lots of friends there, it’s out in the sun so I think the energy is higher than normal shows, but then that can work against you because if kids have been out in the sun and drinking all day, by the end of the night they’re worn out so I think we are going on at a good time, we go on early evening, late afternoon, I think the crowd will be well in to it by then, they’ll have their time to see what it’s about and hopefully get into our show.

You’re doing a US tour with Five Finger Death Punch, Sixx A.M and As Lions, what can the fans going to those dates expect?

You do a lot of shows and stuff with Halestorm, do you guys have a good friendship or is it just management?

Last week, you released the video for Asking For It, which is less of a music video and more of a short film, what was the idea behind it?

We had an idea for kids to play us and us to play smaller parts, but I think the main part of it is just us being goofy and making fun of ourselves and the music industry and people that are on our team whether it be management or label. It wasn’t in a malicious way it was more just fun. A lot of the stuff in the video has actually been said to us at some point in our career so that’s where it all came from.

What’s your favourite album of all time?

U2- The Joshua Tree

Have you ever received any weird gifts from fans?

I just had a child so you get a lot of baby gifts from people but none of them are that weird, I had someone give me a picture of my dog who had just passed away which was kind of odd. I’ve been given the top of a toilet seat before that someone had drawn on. The best gift was a guitar, a really nice guitar. Some of the letters are really strange.

Be as open minded as you can about the music industry and about what music influences you, don’t just be like ‘I only listen to rock music’ because you’re going to be very closed minded to any other soundscapes that are going on out there. Practice as much as you can and don’t pigeonhole yourself into playing just one style of music.

Final question, plans for the next couple of years?

We are going to tour this record until maybe next Summer, and then we will probably take a small break. I’m taking my son on vacation in July and then we’ll see, probably start making a new record at some point next year, but I don’t know for sure.

That’s everything, thank you!

Thank you very much, appreciate it.