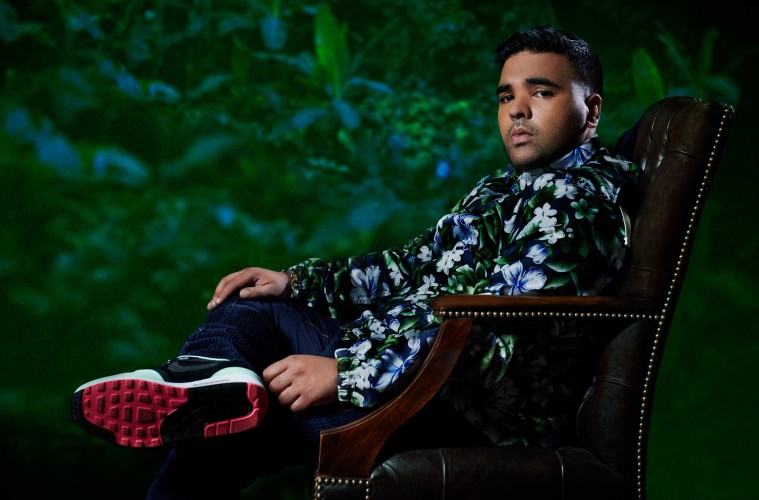 After realising his uni course wasn’t for him, Naughty Boy became a successful creative in the music industry after starting his own production company. From smashing the banker on Deal or No Deal, helping to kick start his career, and now working with the likes of Beyoncé and Ed Sheeran, here is what we spoke about when the SPG caught up with him ahead of 2016…

Hi mate! How is everything going for you at the moment?

Yeah, really good! A really nice positive end to the year. So, feels good! I’m happy about being back on the radio and being musically heard. That’s all I really do – make music and that’s all I wanna be celebrated for and nothing else.

Cool! You started making music in your garden shed a while back, then from there, you won a bit of money on Deal or No Deal to kick start your career; so what we want to know is, how did it feel to be one of the few to beat the banker?

I did! And do you know what? It was liberating! The banker just treats everyone like s**t and we spent time trying to figure out who the banker was, and we came to the conclusion that it’s not just one person, it’s like an accountant and a psychologist and all different people who all contribute to what the banker is gonna say. Those are all conspiracy theories, so we don’t actually know. I definitely know that when someone was on the phone, they were putting on a posh voice it’s not someone who really speaks like that. I wanna expose the banker one day… I will find him!

Haha! Make it a personal mission!

Yeah, it’s definitely not Noel. And do you know what? The banker knew things, so he could tell when we were out drinking and going somewhere; they had tabs on us but in a funny way. He knew little things like when I took this old lady to tea once in Bath near Bristol. It wasn’t a date or nothing.
That’s mad; they must do their research then? It all came full circle at The MOBO’s actually; because the production people were the same crew from my Deal or No Deal show, so they work for Endemol as well. And they remembered my show and me, and it was the first time I’d seen them since the show back in 2007. It’s mad that I bumped into them and they said that I was one of the only people that went on there and actually said that I was going to invest my money in something and made it work, and they said ‘Noel always speaks about you’. I like the fact that I went on there not for money. I used to be scared of talking about Deal or No Deal because I didn’t think anyone would take me seriously, but now I celebrate it more!

Definitely, it’s a great achievement. And your recent track is called ‘Lose It All’, but what do you think you’d be doing if you came away from the show as a member of the 1p club?

Well, it would have never been my money in the first place, so I wouldn’t have really lost anything. But I get what you’re saying because a lot of people who go on there spend the money before they have it in their hand. They are the ones who win a penny. I spent my show with no real pressure because I knew that none of it was mine anyway. I think it’s more a psychological-like karma game; there are no questions and no answers, you’ve just got to trust the boxes.

And with your new track ‘Lose It All’, you’ve collaborated with the global icon Beyoncé! How did you go about partnering up with her?

To be honest the conversation has been on-going for a few months and the song was actually started by Arrow Benjamin; he’s a new artist on the song. I just love putting out things with new artists and just to be part of their journey at an early stage, and he was definitely someone I wanted to be on my album because he is incredible. Someone played the song to Beyoncé and she fell in love with it; I think it’s testament to her that she doesn’t need to feature on a Naughty Boy track really, but the fact that she did, shows that the song is always king and even artists like her will put the song before anything else. I think that’s who she is, at the top of her game, because she takes songs very seriously. We’ve been speaking on the phone and through text; she’s just a normal person like everyone else. I think if you treat people normally, then they’ll treat you the same. I don’t necessarily get star struck anymore, not in an arrogant way.
You’ve worked with even more huge names in the past including Sam Smith, Ella Eyre and Emeli Sandé too. It seems like you kick start a lot of artists’ careers? I’d say I’m just like a passenger in the car. I don’t think I’m driving them. You know when you’ve got the matchbox and the matches? I’m that bit that just makes it. I think there is something rare about just watching someone’s journey; on my last album I worked with Ed Sheeran, Sam and Emeli Sandé but I did those songs when everyone was relatively new. I did a song with Ed when A-Team came out, so it wasn’t like I was waiting for these artists to become who they are now because I think if you believe in something or someone, you shouldn’t have to wait, you know?

So, what artist or band would you most like to work with next and why?

There are two actually; there is one band called Oh Wonder, I don’t know if you’ve heard of them? The track is called ‘All We Do’. I think they’re new… I’ve just heard about that and it really excites me. And also there is a girl called Grace and she has got a song out at the moment called ‘You Don’t Own Me’, it’s the song on the House of Fraser advert at the moment. I just love hearing something fresh. I’m a fan of new artists because it’s such a difficult time at the moment with the bitterness of music and how the radio’s changing. I think it’s up to people like myself to discover rather than follow. If I can put Arrow on a song, it’s his first single and with Beyonce; if I can make that happen, that’s me doing my job. He has got a brilliant vocal on the track! Do you like the song?

Wicked. I think it gets people going as well and it’s a top gym track at the moment too.

That would work well as a gym track! Is there a new album in the pipeline for 2016? We can’t wait to hear some more of your music.

Yeah, I’m going to do some stuff in LA this month for it and obviously Emeli is on the album. I’ve done a song with Miguel, and there are a couple of interesting names that I can’t tell you right now.

Have you got a name for the album yet?

I do but I can’t tell you. Can I tell you? Na, I can’t tell you! You know why? Cos last time with Hotel Cabana it was just like a concept and more of a fantasy album. It was my first album and they say with your first album you get the art out of you… You spend your whole life building up to your first album but this time round, I haven’t got a concept of the album but I have a title. It’s like a ‘Now!’ compilation, so it’s just a variety of genres and me being the narrator just writing and producing; just exciting artists new and old. I want to be the first producer to do different genres for my own album. Wiz Kid, from Nigeria is one of the biggest artists in Africa and I’ve got a tune with him on there, which is like a rap tune.

Was that the guy who did a track with Drake and Skepta? I loved that!

Yeah he did, he’s been here a few times. I’m just keeping it eclectic but I’m not afraid of making it popular. I just wanna please everyone as well as introduce people to other genres and open them up to other types of music. I think that is what we should do as musicians.

Totally agree with that. Going away from music now, you left university during your first semester. What advice would you give to students who go to uni and then don’t enjoy it?

Yeah I did. I feel like I chose a course that was related to music but it was the side of music which I was less fascinated by. It was about how microphones work, vibrations and stuff like that, which is all good knowledge but that wasn’t what excited me. I definitely realised I was more of a creative when I started the course. But as an answer, I’d definitely say take more time knowing what you’re going to study before you start. My mum and dad didn’t want to hear about me dropping out because I would have been the first one in my family to go to uni and to do a degree so, when I did drop out, the pressure was on to deliver in some way. I said to my mum and my dad “just give me a couple of years’ to try the creative way, I might be broke for a little while but after that I’ll do whatever you want!” I think that it’s important to make sure you decide on the right course, and if you have decided the right course and the subject isn’t a problem, I’d say let your guard down because uni is a fresh thing. You’re gonna make new friends and meet new people. But some people don’t make the kind of connections they were hoping for, so I think letting your guard down is key. It’s like school again, there are gonna be different cliques, and different subjects so don’t be afraid to be yourself.