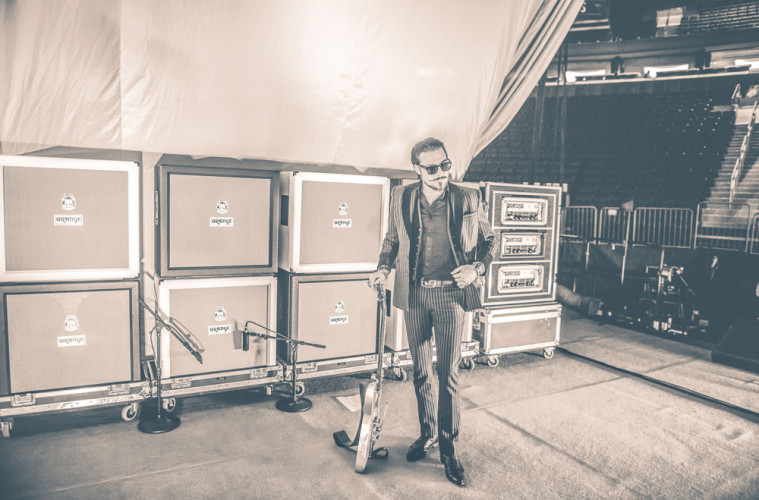 We spoke with Rival Sons guitarist, Scott Holiday prior to the release of their new album Hollow Bones which can be pre-ordered here and their appearance at this years Download Festival. We talk set lists, Black Sabbath and future tour plans!

Your new album Hollow Bones comes out on June 10th and you play Download Festival on the 11th, will you be playing much from the new album?

We will definitely play songs from the new album yeah, we generally start taking things in the day of the release, we’ve started to play Tied Up already and I think before we get to that we might throw another one in there, by the time we get to Download, I’m hoping we can throw 3 or 4 different songs off the new record in.

What’s your favourite song from the album?

Yeah, I don’t think anyone in the band is going to have one favourite, we put hard love and time in to all of them and I guess I’m partial to certain ones, I’m favourable to Fade Out and Thundering Voices, yeah those two stick out a little bit but favourites are tough.

Thank you! Nah, I won’t do set lists until the day of the show, you never know what you’re going to wake up feeling like. I just wake up and want to play the whole new record instead of anything else.

How do you decide what to play, is it literally just waking up and wanting to play that song?

That’s it, you wake up and you feel like it, maybe I had something at breakfast that makes me think ‘let’s play everything off the new record today’ or people have suggestions in the band and we try to work everyone’s wishes in and also what the fans might want to hear as well.

Well I’m going to be there and I’m looking forward to it!

Um, all of it, everything you’ve done.

*Laughs* that’s easy, we’ll give that to you.

How long is your set?

How do festival crowds compare to your own crowds?

Our own crowds are only there to see us so they’re out of their mind crazy when we are playing and excited. The festival crowd is also very exciting but it’s a very mixed crowd, you’ll have a lot of people waiting to see other bands and you still have to turn people on and get people invested, where as the crowds at our own shows are very invested in us already. I like festival audiences quite a bit though, I like the fight, someone is in the audience waiting for Sabbath or Megadeth or something and they don’t want Rival Sons at all but then they go ‘sh*t I like this band’ and they start enjoying themselves and you can feel that turn in them.

I’m sure there will be plenty there to see you, at the moment you are doing the Black Sabbath world tour, how are their fans reacting to you?

Their fans have been really favourable! You never know when you’re opening for these gigantic artists, you feel that maybe the audience is going to be like ‘get the hell off stage, let me see my band’, especially with these expensive tickets and they have been very much the opposite. We’ve had several nights where we’d get standing ovations which is really really nice. The crowd, band, crew and everyone have been really really amazing!

Have you been able to see much of the cities you’ve played?

Not really, sometimes, not as much as I want. Just coming from Budapest, our first time there, it would’ve been really cool to have just 1 more day there, we’ve got friends there now and it’s just so beautiful. I did get out and get up to the Citadel which overlooks the city, we’ll do things like that, people will go running, or go grab something to eat or go see a castle or a major monument and then have to get back and get to work.

I love Budapest. Ozzy called you the best band he’s seen in a long time which is a huge compliment, how does it feel to hear that from someone as iconic as him?

Well just lovely. *laughs* It feels exactly how you’d think it feels. We’ve been getting these really nice accolades from our heroes for a few years now and it’s really overwhelming and makes me really want to continue to work hard and be that band that they think we are.

You’ve also supported some other massive bands like ACDC, Deep Purple, Aerosmith etc, who’s been your favourite person to work with?

I bet! Playing such big shows how do you ensure the crowd get involved with your set?

I have no idea, I just keep playing the guitar *laughs* it’s up to them to be involved, if anyone is going to taunt them or get them involved it’s going to be Jay, and I think he probably thinks the same thing ‘I’m just singing and doing my thing and they just get involved’. So it’s almost involuntary on our part.

Do you talk to the crowd much?

I don’t talk to them at all *laughs*.

Do you have any plans for a UK tour?

We have no tour plans beyond the Sabbath tour which is taking us quite far, if holes open up in the tour we do try to fill it if we can. We’d love to get back to the UK but at this point we only have this festival season lined up.

Well hopefully you come back soon, I’m honestly not just saying this because I’m talking to you but your show was one of the best I’ve been to!

Oh bless you, thank you! I love the UK, we call it our bread and butter, our home away from home and we play so many great venues throughout the UK and there are so many others we really want to hit so we will definitely be back!

Final question, what’s next for you?

Tomorrow is Rock Im Park, in Germany, I’m in Germany right now! I’d have to look at my tour book beyond that but the record ‘Hollow Bones’ is out June 10th, it’s a lot of what we do, and it’s a new record, probably some videos, lots of touring and probably make another record sooner than you would think! That’s the goal, stay busy.

My pleasure, thank you and I’ll see you at Download!