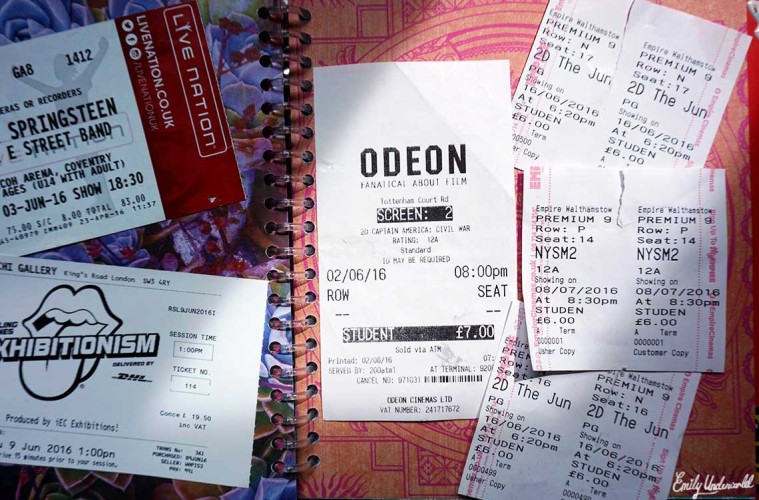 11 Films I Have Seen Recently

During this past month or so, I’ve seen a lot of films both in the cinema and at home. I’ve decided to write little reviews about each one, in case you’re undecided about seeing any of them. I thought it’d be useful to write both positive and negative reviews because I tend to only see positive ones (or sometimes extremely negative ones) on social media!

The live-action Disney remake of The Jungle Book was lovely to watch. The CGI and cinematic views make it worth seeing on a bigger screen, but only if you like the original story because it doesn’t differ much from it. The actor who played Mowgli was amazing, and I love how they included the original songs.

The Legend of Tarzan

I saw the Legend of Tarzan a few days ago when it came out, and damn I was impressed. Distributed by Warner Brothers and directed by David Yates (who also directed Harry Potter!), the Legend of Tarzan is an adventure story about Tarzan and Jane returning to the Congo after being invited by the Belgian King who runs it. Tarzan is played by Alexander Skarsgård, who is fantastic at the role, Margot Robbie plays the fiesty Jane, and Samuel L. Jackson plays George Washington Williams, an American envoy who of course supplies comedy to the plot. I liked that the Legend of Tarzan isn’t just a remake of the Disney Tarzan film, and it contains important issues such as slavery, racism etc. As with The Jungle Book, the CGI and landscape shots were amazing, especially on a cinema screen.

I only recently saw Now You See Me, and I loved it, so I booked tickets and saw Now You See Me 2 last night. It was hilarious, exciting, the acting was great (I’m becoming quite a Jesse Eisenberg fan now), and I was completely surprised to see Daniel Radcliffe in it! If you haven’t seen the first Now You See Me, I definitely recommend it, and the sequel is just as good. It’s all about magicians called the Four Horsemen who also break the law so they’re being hunted by the FBI while performing awesome magic to audiences.

I didn’t expect to enjoy Batman vs Superman, because honestly I’ve been getting a bit sick of superhero films (except Deadpool. Gotta love Deadpool). I realised quickly that it was evidently Marvel superhero films that I’ve been getting bored of, because I love the darkness of Batman films, and of course I’m very keen for Suicide Squad. As I’d seen Captain America: Civil War first and didn’t like it, I had kind of expected Batman vs Superman to be the same kind of thing, just fighting between superheroes, but it’s not at all. We see the development of Lex Luthor’s character, played fantastically by Jesse Eisenberg, the mixture of Batman and Superman’s worlds (it’s very funny when Clark Kent meets Bruce Wayne), and the introduction of Wonder Woman. I watched the extended edition, which was about 3 hours long, but definitely worth it because the extended clips explain parts left out in the original version.

I won’t lie, I do like the Avengers films, but as I mentioned above, I’m definitely getting bored of Marvel films now. I saw the new Captain America film, thinking I’d enjoy it because I liked the previous ones (especially the first one, which explains his backstory), but this definitely felt more focused on the Avengers, particularly Iron Man vs Captain America, with endless action scenes. The only saving grace of this film for me was Spiderman, he was funny and geeky, just how Spiderman should be. Personally, I found myself agreeing with Iron Man throughout the film, despite my friends siding with Captain America.

As a fan of the Divergent series, of course I was excited to see the final film in the trilogy. However, I must admit that I wasn’t particularly impressed. I enjoyed the film, but it wasn’t particularly memorable to me, and sometimes I feel like companies drag out these YA plots too far in order to make more films (e.g. the Hunger Games and the Maze Runner). If you’ve seen the first two Divergent films then yes, I recommend seeing Allegiant for closure, but don’t get your hopes up for an amazing film.

Alice Through The Looking Glass

Everyone knows that I’m a big fan of Alice in Wonderland, so I excitedly dragged my friend out to Camden to see Alice Through The Looking Glass when it came out. While I enjoyed it, it wasn’t anywhere near as good as the first Tim Burton one, or even the original 1951 Alice in Wonderland. I was pretty disappointed to be honest, I felt like the only good part was Sacha Baron Cohen’s character!

The Secret Life of Pets

I had to entertain my little brothers for a day while my parents went to a Coldplay concert, so after getting them Five Guys, wandering around Westfield’s Disney and Lego stores, I decided to take them to the cinema to see the Secret Life of Pets. It was so cute and funny, and my youngest brother loved it. I definitely recommend it if you’ve got young siblings to take with you, or if you like cute animated films!

Another animated kids film about animals, I know… Zootopia (or Zootropis as it’s known here in the UK / in Europe) is an adorable Disney film following a bunny called Judy Hopps, who wants to be a police officer, a job traditionally for predators. It was such a cute film, with important messages about stereotypes and following your dreams!

Pride and Prejudice and Zombies

I decided to give this a go while ill because I thought it’d be funny, but I ended up actually really enjoying it! It was strange to see zombies in a Jane Austen classic, but they kind of make it work in a weird way. It reminded me of Abraham Lincoln Vampire Hunter, and I’d recommend it unless you’re a die-hard Pride and Prejudice fan (because it would probably just annoy you). It’s light-hearted and funny in a twisted way, and was perfect to watch while I was feeling unwell! I’d totally make my mother watch it, but she’d probably be grossed out by all the blood.

I must say, I was really looking forward to this film, as a fan of the Mary Shelley book, and of Daniel Radcliffe. The best way to describe it is ‘fantasy horror’, with James McAvoy playing the eccentric Victor Frankenstein perfectly, told through the eyes of his assistant Igor, played by Daniel Radcliffe. I did enjoy the film, but in parts (particularly towards the end), it became very action-orientated and I get bored easily during action/fight scenes, and I do think the trailer made it look better (and scarier) than it was.

That concludes my mini reviews of the 11 films I’ve seen recently! Have you seen any of them?

Words and photos by – Emily Underworld