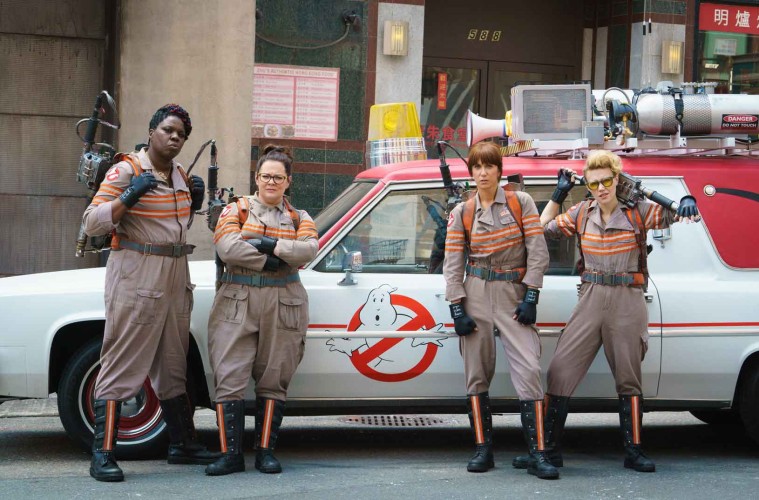 The news that the cult 1984 supernatural comedy film Ghostbusters was set for an all-female reboot was greeted by a tsunami of positive tweets, as well as a tornado of negative ones, coupled with quite a bit of general internet nastiness. Misogynistic voices piped up (not that they need much encouragement) and demanded to know why the much-loved original was going to be remade, and why a bunch of women were going to be the ones we’d have to call when there’s something strange in the neighbourhood.

Misogynists aside, Ghostbusters – the 2016 version – reunites the irrepressible Melissa McCarthy with Paul Feig, director and writer, who always seems to be able to get the very best (and funniest) performance from McCarthy. Under any other leadership, perhaps the (non-women-hating) fans of the original may have felt a little let down, as fans often are with reboots. With Feig at the helm they needn’t worry.

The ghost-eradicating team of the original film is replaced with a female line-up of the highest comedic order. Kristen Wiig plays the super-serious scientist Erin Gilbert, whose academic career is thrown into jeopardy when a book she co-wrote with Abby Yates (McCarthy) about supernatural forces emerges on the internet. Erin tracks down Abby who is studying the paranormal full-time, alongside her zany research partner Jillian Holtzmann (played brilliantly by Kate McKinnon) and is roped in to investigating reports of ghostly activity. The trio are joined by Leslie Jones, playing Patty Tolan, a New York transport worker who encounters a ghost on the subway tracks and is determined to join the, now official, Ghostbusters.

From the very outset, the jokes are fast-paced and the action frenetic. Indeed, the humour is consistently funny and never feels dislocated from the characters. When the Ghostbusters establish their permanent office (above a Chinese takeaway) they employ a receptionist in the form of Chris Hemsworth. The trouble is, he’s a bit dim, has trouble understanding the principle of a telephone, and wears Clark Kent-style glasses without lenses to save him having to clean them. His good looks, and their disarming effects on Kristen Wiig’s character, are the source of much amusement (especially in great scene when he’s being interviewed for the job and talks of his dog called Mike Hat), and Wiig remains the likeable screen presence she established in Bridesmaids.

Melissa McCarthy’s talent for physical comedy and gag delivery is as superb as ever, but the real stand-out has to be Kate McKinnon as the madcap inventor of the Ghostbusters’ proton-emitting, ion-firing, neutrona-wielding weaponry used to catch the ghosts. The quirks in her performance are laugh-out-loud funny and really enjoyable to watch, working in perfect harmony with the other three main characters.

There is much for fans to spot in the film, from nice cameos (Bill Murray makes an appearance as a myth-debunking authority on the paranormal) to homages and nice references to the original movie. But what makes Ghostbusters so effective, is that it never feels like a re-hash of established material or, indeed, a re-working of old gags or characters. Rather, it is simply a very funny, autonomous, and good-natured film with a great cast. The script zips along to a final confrontation with the ghosts (who are unleashed by the film’s villain, a loner hotel worker played by Neil Casey), all the while simultaneously paying tribute to, and enhancing, the world of the Ghostbusters.

As a blockbuster, Ghostbusters is a very enjoyable, very funny, and very competent spectacle. The script fizzes with jokes which are genuinely funny, the action is engaging, and the acting from the film’s protagonists a triumph. The casting of an all-female team becomes an element in the development of the film’s tone, but never comes to define it. In an early scene when the Ghostbusters upload a video to YouTube of a ghost-sighting, they trawl through the comments underneath for support. “Ain’t no bitches gonna hunt no ghosts”, reads one. A very pointed reference. A very successful two-fingers to the haters.