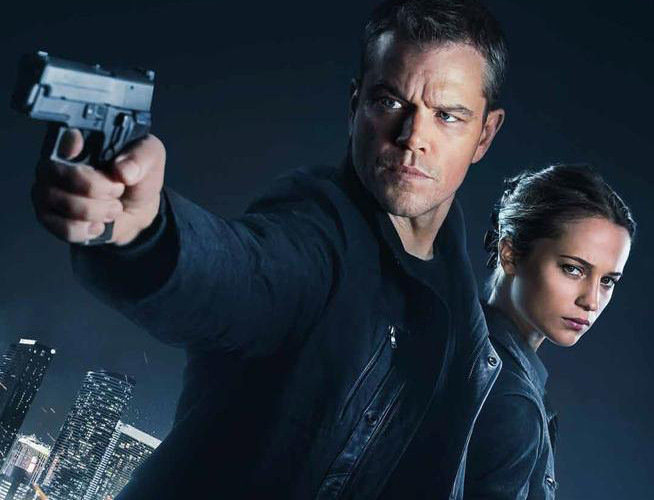 The two Bs: Bourne and Bond. The most successful screen spies of all time, and important influences on one another. The gritty realism of the Bourne films arguably shaped Daniel Craig’s run as 007, and Matt Damon has returned to the franchise, again teaming up with Paul Greengrass who directed the first three Bourne films, the first of which appeared in cinemas way back in 2002. After a brief hiatus which saw Jeremey Renner take over the reins in the spin-off The Bourne Legacy, Matt Damon charges back into the action and makes for an exhilarating, if not entirely meaningful, blockbuster…

In the manner of an extended episode of Who Do Think You Are (just with fewer historians and more explosions), it has taken Jason Bourne quite a while to discover his true identity. Jason Bourne sees the agent everyone wants to kill living a quiet, if not relaxing, existence on the Greek-Albanian border and passing the time by bare-knuckle fighting the local tough men. But when Nicky Parsons (a return to the role by Julia Stiles) manages to hack into the CIA’s database and steal files about a new, highly-classified agent recruitment programme, she gives Bourne the chance to find out more about his past and uncover the truth behind his father’s death.

Predictably, the CIA are not too happy about this, and cyber division chief Heather Lee (Alicia Vikander) is tasked by the CIA Director (played in gravelly tones by Tommy Lee Jones) to stop the hack and neutralise Parsons and Bourne. Things don’t go to plan, of course, and Bourne escapes, even with the CIA’s best assassin on his heels (a suitably persistent Vincent Cassel). From the outset, it’s clear that the action is going to be viscerally sharp, with a particularly well-filmed sequence seeing protestors attacking riot police on the streets of Athens.

Jason Bourne – and the action – zips around Europe as if on a Contiki tour, and some brilliant set pieces in Berlin and London culminate in a jaw-dropping (but ridiculous) car chase through the streets of Las Vegas. Greengrass and director of photography Barry Ackroyd certainly know how to move a camera, jumping around and through the action with an intense, but precise sense of tension. Forty-five-year-old Matt Damon is on top form as ever, getting stuck in to neutralising his enemies and, in a heart-stopping moment, throwing himself off a building. Although Damon’s performance is refined and compelling, he has little dialogue in the film, quite the opposite from the wise-cracking botanist he played in The Martian.

There’s a clear attempt to bring the Bourne franchise right up-to-date (Damon’s most recent outing in the role was nearly ten years ago!), and the narrative incorporates a sub-plot featuring Riz Ahmed as a Mark Zuckerberg-esque Silicon Valley techie about to launch a new, consumer data-driven enterprise. It becomes clear that he’s had some murky dealings with the CIA and is dangerously implicated in the hunt for Bourne. The CIA, usually the good guys controlling things from high-tech control centres, are now the morally-questionable aggressors in the game of hero Bourne vs. the State – the series’ hallmark.

It’s an interesting discussion of the era of big data, big government and the rise of social media, but it never really gels with the overall plot which, as a whole, barely advances Bourne’s story any further than we got in Ultimatum. The thing which made the previous Damon Bourne films such a success was the strong scaffolding of the plot which supported the action. In Bourne 5, however, this narrative structure is a little more flimsy.

Tommy Lee Jones puts in a great performance as the determined CIA Director, intent on bringing Bourne down, whatever the cost. His chiselled face and gruff manner plays in perfect counterpoint to Alicia Vikander, who is fast becoming one of the most exciting actresses in Hollywood. With her own agenda for bringing Bourne in, and an unfaltering belief in herself, Vikander’s character is an engaging and important development in the male-dominated world of the Bourne films.

Matt Damon has really grown into the role which assured his A-list status, and audiences will be really pleased to see him return in Jason Bourne. The film is characterised by some superb performances (especially from Vikander) and some bold, trademark Bourne action. The pace is relentless, and the end result largely satisfying. Will there be a Bourne 6? That’s a certainty.