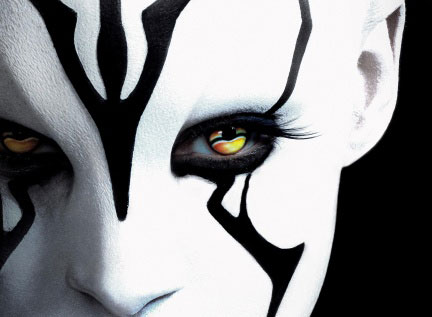 Here’s a fact for you: Chris Pine spent a year on exchange at the University of Leeds. Not entirely sure what relevance that has to Star Trek Beyond, apart from the fact that he – and his eyebrows –  return as Captain James Kirk, everyone’s favourite Starfleet Captain, in the third instalment of the latest Star Trek cinema reboot. There’s plenty of fun to be had in Star Trek Beyond, a film where humour, and a narrative approach taken from the classic television series, is very much the order of the day.

Lens-flare maestro J. J. Abrams has stepped down from directing duties, becoming instead a producer for Star Trek Beyond, and Justin Lin (best known as a director for the Fast and Furious series) has stepped up to direct. The script is co-written by Simon Pegg, who also plays the long-suffering engineer Scotty, and is his first non-comedy screenplay to hit the big screen. Pegg’s influence is obvious: he injects playful humour into the action and there are plenty of laughs to be had in the film, many of which revolve around the love-hate relationship between Spock (Zachary Quinto) and Bones, the Enterprise’s rather pessimistic doctor (Karl Urban).

Theirs is not the only relationship which becomes a constituent element of the film. The bromance (and there really is no other word for it) between Kirk and Spock again flourishes in the plot which opens to find Kirk growing increasingly uninterested with his role as Captain. He applies for a promotion to become Vice Admiral of a massive Starbase, Yorktown, and Spock, too, is thinking of moving on from Federation duties having ended his relationship with Lieutenant Uhura (Zoe Salanda).

Such feelings are put on hold, however, when an escape pod drifts out of a nearby nebula, and its occupant claims that her crew have been imprisoned on a strange planet. The Enterprise is tasked with undertaking a rescue mission but is ambushed by a swarm of space ships which cause it to (rather spectacularly) crash on the planet. Most of the crew are taken prisoner by the reptilian baddie of the film, Krall (Idris Elba), and Kirk and his team must reunite to escape the planet and stop Krall from destroying Yorktown.

This crew-stranded-on-a-remote-planet narrative feels a lot closer to the plots of the TV series. Die-hard fans will no doubt be pleased with this, and the casual cinema-goer will find plenty to enjoy – principally from the comedy which arises from Scotty’s interactions with Jaylah (played by Sofia Boutella), another victim of Krall’s plans for mass destruction. Jaylah proves a helpful ally for Kirk and the crew, and Pegg has said her character was based on Jennifer Lawrence in Winter’s Bone – J-Law/Jaylah, get it?! Some of the combat scenes do feel a little inert and rather forgettable, which is a shame as it drags down some of the film’s better moments.

Chris Pine puts in another likeable performance as the Captain, with a strong screen presence befitting of such a role, and Zachary Quinto’s eyebrow raising is on point. Zoe Salanda is, unfortunately, given little to do, and Anton Yelchin’s tragic death last month gives a poignancy to his fresh-faced interpretation of Chekov. As an ensemble cast, the performances are assured and engaging, and even reinterpreted when we see Sulu (John Cho) with his civilian same-sex partner and their young daughter.

The special effects are – as to be expected – thrilling, particularly in the destruction of the Enterprise, and the action sequences in general are adequate popcorn entertainment. But here is one of the problems with the film. In going back to the original series, it loses some of the spark and the cinematic thrust which the first film harnessed to great effect. Events are perfectly watchable, but never truly gripping. The narrative is also a little uneven, with Idris Elba’s talents only really making an appearance in the last twenty minutes or so, when his character’s evil motivations are revealed, but not really explained.

Don’t get me wrong, Star Trek Beyond, in summer blockbuster terms, works well as an entertaining adventure and will leave audiences with a satisfied smile on their faces. But, ultimately, it lacks the spark to put it into warp drive and make it a truly intergalactic experience.