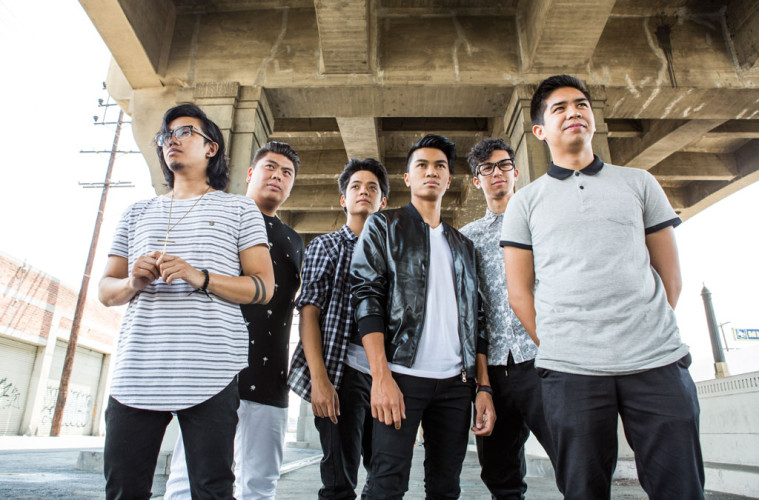 We spoke with Filharmonic’s Trace Gaynor and Niko Del Rey about winning NBC’s The Sing Off and appearing in Pitch Perfect 2.

I’m good thank you! How did you come together as a group?

Trace- so we started on a show called The Sing Off, it was Niko and two of the other guys, they went to school together and Avi from Pentatonix who won the season before us went to school with them as well and he heard the show was coming back and contacted Jules and Niko and told them that they should find other Filipinos in the area to put a group together so they found the rest of us and put us in a group. The first day we all met was the day we filmed the audition for the show.

You guys have really good chemistry, how long did it take for you all to work your sound out having been put in a group together?

Trace- We didn’t have very long because we were formed for the show, we probably had all of two months to put something together that was going to be on TV but we had a lot of fun times working with the other a cappella groups on the show too so we were learning from other professional a cappella groups from the very beginning.

How would you say being on the show taught you about the music industry?

Niko- The groups on the show have been doing it for so many years and they have this system that is very efficient, we were just some college kids and the way they do it is just so professional but still fun at the same time so it really taught us to grind down our sound in an efficient manner that we still utilise today.

What’s the process of the show?

Niko- It all happened in the time span of 6 days and the 7th day we’d actually go on camera but the 1st day we would get our song, the opening number and the battle song and then within the next 2 days we would have to have a rough draft of the arrangement ready to show to the producers and the choreographers and in the mean time we’d have to go through wardrobe, so rough draft to the producers and then they would edit it for us and they make little adjustments and then we practice on camera and by the 7th day we have to put everything together.

What were you all doing before you went on to the show?

Trace- We were all doing different things, 3 of us studied music, I was studying broadcast journalism.

Niko- Yeah we were all in school, VJ was the only one who wasn’t, the other 5 of us were in college, and Trace finished college while we were on the Sing Off tour so that must’ve been crazy and the others had to leave college for the show.

Following your appearance on The Sing Off, you played alongside Linkin Park, Black Eyed Peas and Pentatonix and you also made an appearance in Pitch Perfect 2. How have those experiences helped to develop you as a group?

Trace- I think it’s cool because when we were on the show, a lot of what we were doing was developing our sound and coming up with how we wanted to be perceived and as soon as we were done with that we were performing with really established bands, like Black Eyed Peas and they have such a distinct sound and it was cool to go straight into that and really work out what our niche in the music industry was going to be. Everything we did was a massive learning curve for us.

What made you want to get into music?

Trace- We all did it kind of as a hobby and when the opportunity to do it professionally came up, we just did it, I never would’ve guessed that auditioning for The Sing Off would’ve lead to a full music career and it’s just an opportunity that would be so hard to pass up. We all did it for fun and now that we can actually do it every day for our job is crazy.

Are there many disagreements/arguments between you all?

Niko- All of our arguments and disagreements are like musical preferences when  arranging a song, but for the most part we are very cohesive and it’s a brotherhood, we know at the end of the day any musical disagreements is just a business choice trying to better the group and stuff.

Trace- Considering it’s like 6 random people that were put into a room to audition for a tv show, I think it has worked very well.

How long does it take you to get a cover perfect?

Niko- I actually don’t think we have any perfect covers, there are songs that we started on The Sing Off in 2013 and we are still tweaking them to this day like ‘ah man it’d be really cool if we still did this’ so no matter how long it’s been in our repertoire we are always trying to brush it up.

How often do you rehearse?

Trace- We have to practise a lot, when we were on tour we would be performing every night and before every show we do sound check and making sure everything is sounding great and when we are not on tour, typically I would say 3 or 4 times a week. But because we have been working all year we took a month off to just be like normal people and then we are starting up again next week, we are rehearsing again, performing and getting ready for our fall tour so it’ll be quite busy.

Niko, How do you figure out exactly what sounds will best fit a song?

Niko- It’s a huge trial and error process; a lot of it is just practising on my own and trying to make up different sounds and when we rehearse as a group, like I said we have our music preferences, sometimes I’ll do something and Jules will be like ‘that’s really cool’ or I’ll do something and Barry will be like ‘I don’t know if that really fits the motion of the song’ so it’s a little bit on me but as a group they put a lot of opinion into it and it’s cool even when VJ is like ‘hey I kind of envisioned something magical here’ and I’m just like ‘what’ and try to make up something and he’s like ‘that’s it, that’s exactly what it should sound like’.

Is it easy to slip up?

Niko- Yeah it is, there was one time that we were performing a show in Pennsylvania and I got a strawberry seed stuck in the back of my throat and I just started coughing like the biggest coughing fit but that’s only happened once and everyone started laughing. So before every show I drink a lot of water and try to go for a run to get my lungs ready and just try to be mentally prepared for the whole hour.

Trace- I think it’d be cool to work with another group like Fifth Harmony or One Direction, just another vocal band.

Niko- If I had to choose someone I think it’d be Tori Kelly.

Trace- We are going on tour in August, uploading a lot of YouTube videos and we are going to try and get into original music which is kind of an unheard of thing for a cappella groups so we are going to write and record original stuff.

I look forward to it! Thank you!

Both- Thank you, bye!