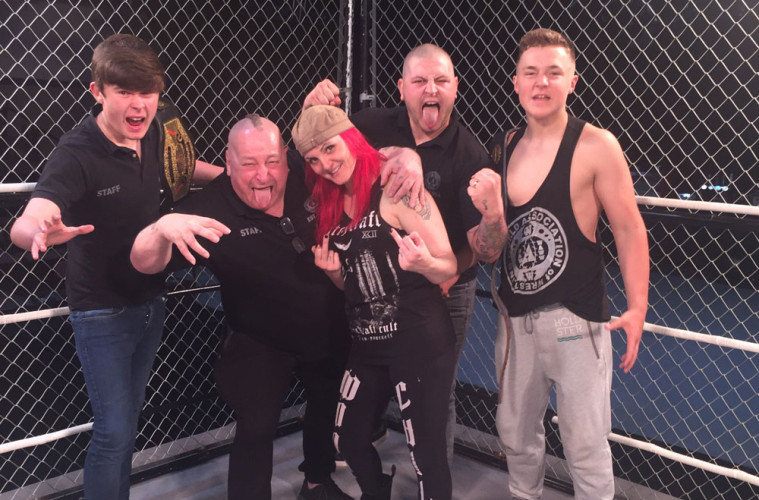 We caught up with champion wrestler Zak Knight and his parents Sweet Saraya and Ricky Knight before their shows at Epic Studios this weekend! Head to Epic Studios, Norwich on the 2nd and 3rd July to watch the WAW.

Tell us about your career to date, I went on your website and it says that you’re the champion.

So are you going back for blood?

Zak- yeah I will, at the minute I’ve got to focus on the tag team because me and my brother are the world tag team champions so we’ve obviously got to defend them but once I’m back and healed, I’ll be going back for that title.

So your brothers a wrestler and so is your sister?

Zak- Yeah so there’s my brother Roy Knight with me with the Hooligans, my sister Paige who’s in the WWE, my mum Sweet Saraya who is a four time world champion in four different continents and my father Ricky Knight who’s been wrestling 30+ years who built the business, he’s been champion multiple times, he’s had over 100 championships in his career.

How did you get into wrestling?

Ricky- It’s a long story, I was a bouncer in a nightclub in Kings Lynn and a load of wrestlers came in one night and I got talking to one of them called Jimmy Ocean and basically it went on from there, he took me training, said I was a natural and asked me whether I wanted to do it and within a year we won the tag team championship.

It carried on from then?

How often do you train?

Zak- We’ve got a static 24/7 gym on Mile Cross Lane and we are there every day, we religiously train every day. Don’t even ask about a diet because we don’t believe in all that, we’ll eat what we can, when we can, we live on the road so a McDonalds or a Burger King or a sandwich from a garage is kind of our diet. So when we train, we might not be lifting weights everyday but we will get on the treadmills and run around the rings.

Ricky- It’s cardio as well, I’m 20 stone people will say ‘he’s a fatty’ but I can wrestle for an hour, it’s all about cardio.

Ricky, are you still wrestling yourself?

Ricky- oh yes, I’m on tomorrow night, in a cage, against my sons actually.

How does that work?

Ricky – Wrestling is an art, it’s a big illusion, we will perform stunts tomorrow night we’ve got a 15ft cage, we’ll be taking bumps off there tomorrow night, there’ll be ladders going everywhere and we will hurt each other but the thing I want at the end of the night is not to beat my sons but I want the crowd to leave wow’d and asking ‘how’d they do that’, it’s the only entertainment where the kids don’t have to sit down and be quiet they can get up and make noise and be a part of it.

Zak- We’ve got a soap opera star as well with story lines to keep people interested, that’s how we drag them back in, with the story line and the cliff hanger endings.

Ricky- Yeah the WAW is a more hard federation. We do hit each other whereas some of the Americans miss each other by a yard.

Sweet Saraya- We don’t do choreography, we fight.

Ricky- Yeah we have a storyline that me and my sons have fallen out and I’m a horrible father and my sons are trying to bring the business forward and I don’t want that, so that’s what we’re doing tomorrow night and we will be giving each other a hard time.

It must be quite hard because surely you do get hurt?

Ricky – oh yeah, I was a bouncer and Sweet Saraya broke every bone in her body and was blinded for six weeks but it is an adrenaline rush in there.

You must have to control your tempers?

Sweet Saraya- Temper doesn’t come into it, it’s a job so you go out there and do your job, and the fact that our job is that we use sports, I mean I’d give 100% if I was an accountant so if I‘m going to go in there and my job is to fight, I’m going to fight. I’ve been doing it 26 years and you have to go really strong to hurt me because my body is used to it, my body is used to being hit now, so you just go out there and beat each other up. It’s like sparring; you have to spar to let your body get used to being hit. To be a boxer, it’s not all about cardio, it’s about taking hits to the body and the face to toughen everything up and the longer you’ve been in the business, the easier it is to soak up the pain. We just give 100%. We are very similar to ballet, we create a story through movement and ballet is the only other thing that you can say depicts a story without any sound, you know what’s going on. We tell a story with our bodies and we’ve still got to be taken seriously as fighters. So it’s a very complicated business but the adrenaline rush of a body movement or a look can make the crowd love or hate you, it’s a very powerful thing to have and the addiction part of wrestling is the control over the crowd. Your body hurts, everything stings, you carry injuries all the time but that ultimate power of being able to go in that ring and play with people’s emotions is what the wrestlers miss when they leave the business.

It’s a really powerful thing to do then.

Sweet Saraya- It’s extremely powerful, you give anybody control and they become the most powerful human being.

Ricky- It’s like musicals, everything they play to the crowd, they can make them laugh, cry and they can bring out every emotion. Wrestling’s the same, you’ll see comedy, tragedy, everything. It’s the atmosphere that brings people in, we even get the boxers coming in and watching us. Doors are slowly opening for us and hopefully it’ll be back on TV like it used to be when I was a kid.

How do the characters you play differ to yourselves in real life?

Zak- To be honest with you, when you first start wresting, they tell you about the characters and say ‘you can be anyone you want to be’. I’m one of the trainers at the moment and if I’ve got a student, I’ll say to them ‘tell me two people in real life that you want to be’ and you’ll get Spiderman and the other will be so farfetched. Their dream is to be a masked person, that was mysterious and you can be anyone you want to be, it’s an alter ego, so for me, I’m a very up and down person, one minute I’m very quiet and the next I’m really loud but my character I’m a bit of a thug that loves to fight but in real life I’m not really a fighter, I’ll walk away from confrontation and stuff so I can be someone that I’m truly not, in the ring I can be someone I wish I could be in real life.

Sweet Saraya- I’m just a bitch in everyday life, I just go out there and fight, I mean obviously there’s a lot more to it than that, it’s about playing the part. I don’t know, I’d say that because I’ve done it so long she’s now just part of me, I’m definitely very similar to my character.

What about idols, who are your wrestling idols?

Zak- When dad first started, it was more the British wrestlers that were your idols rather than the big American wrestlers because they were just as big over here and travelling around with mum and dad obviously my idols were right in front of me, I was watching them every night, mum, dad, all the other guys that were wrestling, they were my idols until I got popular with the American wrestling in the 90s and I started watching stuff in the late 90s, so for me, there’s a lot of British wrestlers that you wouldn’t know who are my idols but on the American side of wrestling it’d be people like Shawn Michaels, Mr Perfect and people like that.

Sweet Saraya- To be honest, it’s not the person, it’s the style, I liked Johnny Saint. My husband developed my character on Sherri, Elizabeth and Luna, he took three parts of three different women and put it together to make me. At this moment in time, my family are my heroes, I don’t aspire to be anybody.

To wrap it up, when are your next fights?

Ricky- We are at Yarmouth tonight and we’ve got two tomorrow, then my wife’s got all female on Sunday, the toughest females on the planet.

How big is your team?

Zak- Let’s try and put this into perspective, last night, I got into this building at 8:30 and we didn’t leave until midnight and we had a team of 30 people just setting up the ring and the cage. Then a further 15 people setting up the entrance, the lights, the smoke, the screens and then you’ve got people that are above them like the directors of the TV show in their studio getting their stuff sorted and then you’ve got all of us.

Ricky- Our team of directors flew in from LA and our TV agents flew in from Spain that’s how big this little old Norwich business has become, probably one of the biggest in Europe.

Zak- By about 10:00am tomorrow there will be at least 100 people in the building making sure that it’s prepped and ready for the show and they’re all working under us.

Really big! Thank you very much!